Juicy Crab is great even without the crab 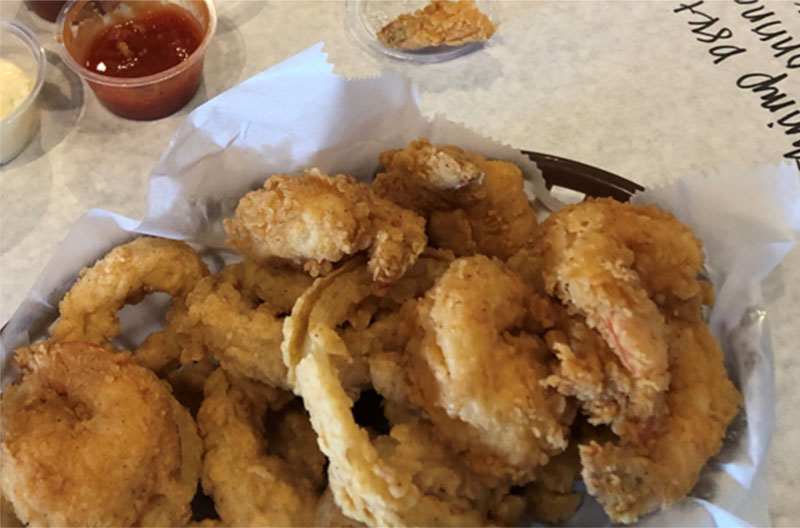 A country boy who lived in Gallion all his life, joined the Navy one day and left his home. He had never experienced many things of this world and was introduced to most of them while away in the service over the majority of the planet over the course of 30 years. Some of them good. Some of them bad. Some of them great. Some of them terrible. That country boy was me. I often wish that I could return to that naive young man who was the butt of many jokes because of it and because of his slow, southern accent. I didn’t mind the ridicule because I knew more about life and living, family and friends, and, don’t forget southern food, than they would ever experience. Their big-city attitudes and selfish desire for instant self-gratification was one of those things I learned about all too often and was one of the things I wished to rid myself of by returning to those days of my simple, country youth.

One of things I learned about when living in the Washington, D.C. area was how to eat crabs. Even though we lived relatively close to the gulf coast, my experience with crab was limited to seeing my mom enjoy a crab cake which did not look appetizing to me in the least when I was a kid. I stuck with shrimp and French fries most of the time.

One weekend my sister-in-law and her husband offered to take us out to a crab house up in Maryland somewhere on the coast. We thought it sounded good and took them up on the offer. We enjoyed our drive up there and met them at a shack that looked like it had seen better days but was crawling with people. We decided it must be good with that many people trying to cram into the little place. Luckily, we had reservations and arriving right on time were able to pass up the throng of bodies tapping their feet and checking their watches. We went directly to our table.

I thought “OK, so far so good.” Now I have already mentioned that I had never really eaten crab so I had no idea what kind of trouble I might be getting myself in. The place was quite noisy but very relaxed. We were deep in conversation and I didn’t really notice what all the other people were doing.

I told our host to just order for us too as I had no idea at the different menu items and would be ordering in the blind had he not bailed me out. While we were waiting for our food to arrive, one of the servers suddenly appeared and without asking tied a plastic trash bag around my neck (a bib) and almost started a fight. He then gave me a short stick about 3 inches in diameter and about 8 inches long. Now, I am really confused. Had they not been doing the same thing to the rest of the table I would have thought I was again the butt of one of those jokes people love to play on southern boys.

I was thinking, “am I going to have to fight someone for my food or kill it with this stick?” Then they brought me some safety glasses. What in the world is going on?

Well as most of you probably know now, they were about to bring huge trays of whole crab and litter the table with them. The stick was to crack the shells and legs. The bib was to protect my “preppie” button down shirt and the safety glasses were to protect the restaurant from getting sued.

I guess I had a good time but I never want to do that again. I needed someone to hit me with a garden hose when I left there. I never said anything to my host because that is not the way of a gentile southerner. But I believe we paid way too much money to do to the food at the table what should have been done in the kitchen. I didn’t even know where a crab’s innards where. I had never spit out so much food in my life. I had lost all semblance of what I considered to be good public manners that night. Good thing I didn’t know anyone there. I will stick with the shrimp and French fries thank you.

We decided to try a new restaurant in Tuscaloosa that just opened a few weeks ago. It is called “The Juicy Crab,” at 1800 McFarland Blvd. East.

I have heard nothing but good things about this place. But, as you can probably already tell, it took me a minute to get up the guts to show my face in one of those crab houses again.

Guess what I ordered. Yep. Shrimp and French fries. We started though with their fried calamari appetizer and it was delicious. It was not rubbery like most places. It was tender and the batter was light and delicious. We also tried their onion rings. I think mine were under cooked. But, they were still good. I really expected my shrimp to be those little small ones you can get at the grocery store that were quick frozen somewhere in Asia. These were jumbo for real. Two big bites per shrimp. Excellent.

Now if you are one of those people who like to stab, pick, and break and bruise your food before you eat it, this is the place. They cover the table with that paper you sit on in the doctor’s exam room and they give you plastic gloves to wear to protect yourself from all of that dirty stuff you fight to eat it. They honestly do have beautiful deals on their combos with things like snow crab legs, shrimp, sausage, eggs, corn, and potato in a basket. The have Dungeness crab and mussels, blue crab, lobster, raw oyster, fish baskets, chicken tenders, and a huge selection of appetizers and sides.

We really did thoroughly enjoy our meal and the servers were very pleasant and engaging. The server writes on your table covering with their name, the time you arrived, and, as you order, they write at each place setting what that person orders. I was tempted to add something weird to mine after the server left but my manners took over and I didn’t mess with them. This time.

If you are in Tuscaloosa and feel like boxing some crabs while Eat’n Out, The Juicy Crab is an excellent place to do it.

Eat’n Out is written by Robert Duke for the Demopolis Times.

(This column originally appeared in the Wednesday, February 5 issue of the Demopolis Times.)