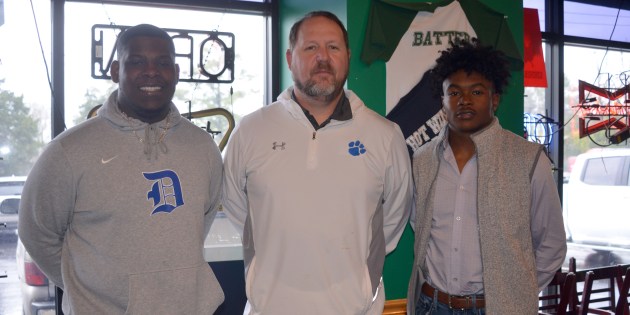 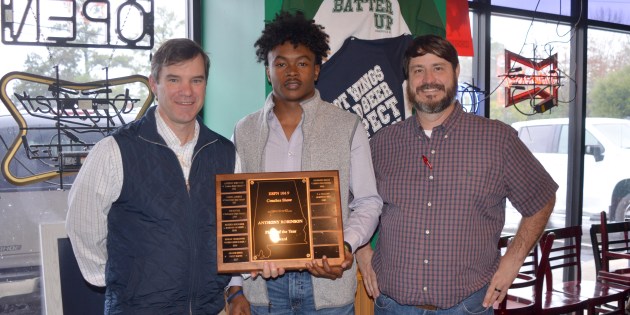 C.J. Williams, a football player and track runner, was further honored as the Anthony Robinson Player of the Year. He is the eighth athlete to have won the award.

Williams has played football since he was seven years old,and has participated in track since the ninth grade. As a football player, he was running back, punt returner, cornerback and kick returner.

His love for the two sports stems from what he says is a God-given gift, his speed.

“God gave me a special talent with my speed, so I try use it to the best of my ability,” Williams said.

Williams has enjoyed much success with football, but hopes to follow a new path by signing a scholarship to run track at college, though he has made no official decisions as to which college he will be attending. Williams is still interested in joining a football team in addition to track, and he said he’d like to play cornerback or wide receiver.

Head Football Coach at DHS Brian Seymore said Williams was both a great player and student. “[He’s a] leader on and off the team.”

Upon being named Player of the Year, Williams said that he felt blessed to earn the distinction.

“I want to thank God for blessing me with the talents to do so. I’m going to try to keep pushing and get better every day,” he said.

Williams is the son of Shenika and Talmus Williams.

Fred Haywood, also a football player from DHS, signed with Mississippi Delta Community College to continue playing the sport he’s participated in since he was six years old.

Aside from it being an enjoyable sport for Haywood, the team aspect is also one of his favorite things about football.

“It’s a team sport, and you build bonds with people you’ve never known or probably have known for a while,” Haywood said.

Haywood also said that he fell in love with the campus itself as soon as visiting and saw that the MDCC Trojans exhibited the same mentality that he loves about football. “I loved how they played together, and how they came together at the end,” even after a less than ideal season, Haywood said.

Seymore said he was looking forward to the future Haywood has a MDCC and in the sport in general. “I think he’s going to go on to do great things, and I’m excited about him finding a home.”

Haywood is the son of Dionne and Frederick Haywood.