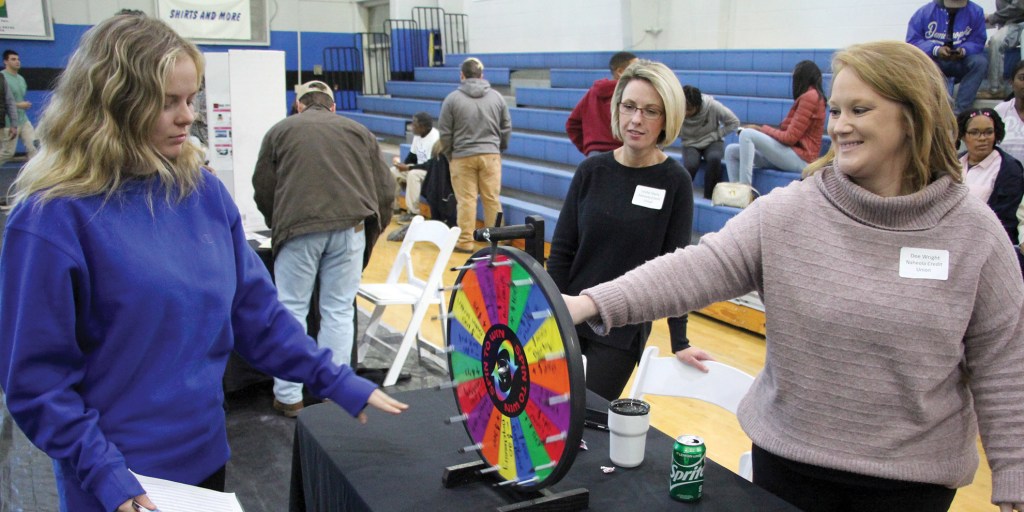 Demopolis High School senior Chloe Donellan takes a spin at the “life wheel” during the Reality Fair held at DHS last week. The wheel is full of unexpected surprises, most of which result in an additional expense. Volunteering the table are Dee Wright and Leslie Hasty.

Before seniors at Demopolis High School have even graduated, their budgeting skills are tested at the Reality Fair, an in-school exercise designed to give students a realistic glimpse into paying bills on a monthly budget.

Nine booths are set up in the gym and students, who have been given a life scenario including monthly income, debt, number of children and more, are instructed to visit each booth representing common expenses and make decisions on what to spend and where.

“We just want to educate our students on what it costs to live,” said Ashley Coplin, marketing specialist with Naheola Credit Union, a main collaborator for the event. 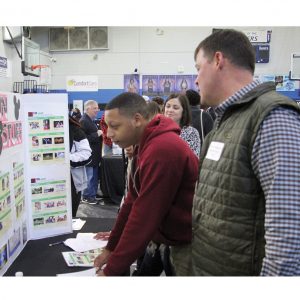 As part of the exercise, students, partnered together as a married couple, visit the childcare booth and choose between sending their child to a certified daycare for $950 a month or having grandma babysit the child for $300 a month. If the child is under a year old, they need to buy formula, and if the child is under three years old, they must buy diapers. Further options for clothing and toys are presented directing the students to choose between varying levels of quality at different prices.

Volunteers become sales people, trying to convince the students to spend more. They can also hold sales or create bundles for students to purchase at a discount.

Unexpected expenses were also represented. “Mayhem” walks around forcing students to repair their car or buy magazines for their nephew’s fundraiser. Another booth with a spinning wheel gave the same affect with some options being winning $200 or being forced to pay an unexpected bill.

“The kids have either really good luck or bad luck depending on what they draw,” Coplin said.

Many students participating in the first session on Feb. 14 did well with prioritizing necessities, and several students had money left over to put in a savings account or pay off dept after they visited each booth.

“Money goes fast. Especially when you have kids, money goes fast,” Student Daniel Crocker said. His partner Cooper Manning also felt the experience was useful, saying that “We learned how to be more responsible with our money.”

Other students noted how much more expensive things were than what they thought, like transportation.

Juli Lewis from the League of Southeastern Credit Unions also took a few minutes at the beginning and end of the exercise to give the students some financial tips to help them budget in the future.

The Reality Fair at DHS, which included two sessions with 80 students each, was a joint effort between Naheola Credit Union, the League of Southeastern Credit Unions and the high school.

“We had a great time interacting with the seniors at DHS and seeing how they think things through. Many were budget conscious and still had money left at the end. We are proud to collaborate with Juli Lewis of the League of Southeastern Credit Unions and Kelly Gandy, Brandi Dannelly at DHS to host this Reality Fair,” Coplin said.

(This article originally appeared in the Wednesday, February 19 issue of the Demopolis Times.)