Whitfield Regional Hospital CEO Doug Brewer came forward at the Marengo County Commission meeting on Feb. 11 to thank the county and the voters for the recent passing of a 4-mill property tax to support the hospital.

“It’s really humbling for us,” he said.

According to Brewer, the hospital will continue strengthening and adding services to fulfill the counties needs as a regional hospital. “The funds will allow us to be able to expand those services,” such as the Regional Stroke Program, inpatient dialysis and the rural clinic development. 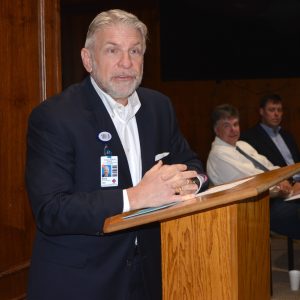 Brewer offered to return to the commission in a year to give another update on WRH and what has been done with the additional funds.

“Our board has spent a lot of time looking at our current financial situation, and we intend to be very prudent with those funds and make sure that we provide a hospital for this county that will be here for many, many years to come,” Brewer said.

Commission Chairman Freddie Armstead said that he is confident in Brewer’s leadership, and he and the other commissioners thanked him for his efforts at WRH.

Later in the meeting when the topic of storm shelters for county residents came up, Brewer told the commission that WRH serves as a shelter during severe weather and has a capacity of 500-600 people.

The commission also received an update on the upcoming CDBG project to resurface five county roads from an engineer representing Goodwyn Mills Cawood. The county received a grant for $350,000 but will be picking up the remainder of the costs for the $2,028,762 project.

Following executive session, Commissioner Calvin Martin asked the engineer to assess Southern Pine Road to see if it meets the criteria to become part of the project and to consider adding it if it does.

During departmental reports, Probate Judge Laurie Hall announced the primary election will be held March 3, and a runoff election, should it be needed, will be March 31. Revenue Commissioner Sharon Hilbish is also working on collecting property taxes on 1,100 delinquent parcels. A tax sale will be held June 2 if taxes have not been paid.

Other items approved by the commission include:

• the hire of Keith Wood as a deputy in the Marengo County Sheriff’s Department.

• a resolution supporting the I-14 expansion into Alabama.

• renewing the county’s participation in the ACCA Liability Fund.

• moving the tobacco tax CD to Merchants & Farmers Bank on a 12-month contract at a two percent rate.

• a resolution authorizing a state application for a $3.8 million tax abatement for Foster Farms.

• entering executive session based on good name in character.

• a resolution authorizing the Engagement of Finance Professionals and the Execution of a Warrant Purchase Agreement.

• debt repayment authorization with WRH dictating that the hospital will pay $250,000 towards the current $1 million loan and that the remainder will be amortized over eight years with this loan being paid for by the sales tax provided the hospital each month.