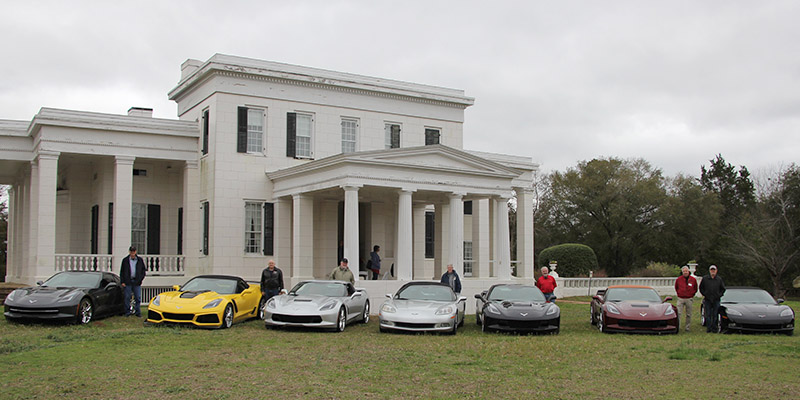 Historic Gaineswood got sporty recently when a group of Corvette enthusiasts drove in to visit the famous Demopolis landmark.

The Mid-Alabama Corvette Club consists primarily of members from across the Birmingham area, but is open to anyone with a passion for the classic sports car. The club has a total of 165 members.

On the second Thursday of each month, members who can will join as the “Back Roads Bunch” and travel as a group to interesting locales across the state. This February it was decided that destination would be Gaineswood and the club planned their visit with Gaineswood Director Nancy Lindsey.

“One of our members sent an email about Gaineswood and the very nice folks here. It seemed like an interesting place to visit,” said Larry Linley, a club member from Springville, Alabama.

So, what is it that drew the members to the Corvette?

“It’s America’s sports car,” Linley said. “I remember being 10 or 11 years old and watching Route 66. There was a white corvette and I said one day I would own one of my own. My first one was a 1966 white Corvette.”

Linley is now on his thirteenth Corvette model, a 2019 Corvette Grand Sport that took first place in the convertible class at the Birmingham World of Wheels.

The club’s monthly excursions provide the members an opportunity to drive their cars and visiting interesting places. But, it is also about sharing their passion for the car.

“We enjoy driving our cars, but mostly we enjoy that others enjoy them. We like the appreciation from folks when they see them,” Linley said.

But, the club isn’t just about showing their cars. They organize shows to raise money for a variety of projects, but primarily fund a program called Magic Moments.

“We use the money we raise to fund a vacation for an underprivileged family,” Linley said.

The group recently donated 24 red wagons to Children’s Hospital, which are sometimes used to transport children around the facility.

Their biggest fundraiser is the Vette Spectacular, where Corvettes from across the Southeast converge with trophies going to the best in a variety of classes.

They also participate annually in the Veterans Day Parade in Birmingham, which is the longest such parade in the nation.

“We like to be involved in anything where we can support our communities,” Linley said.

According to club member Larry Hamilton of Vestavia Hills, the club members share more than just a passion for the Corvette.

“When I first joined I was impressed with the people more than the cars. I came to the club and found a bunch of patriots who love God and are very charitable,” Hamilton said.

For more about the Mid-Alabama Corvette Club or to register for the Vette Spectacular visit midalabamacorvetteclub.com.