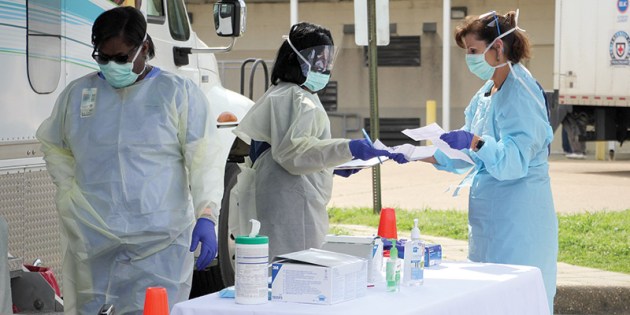 Healthcare workers at the scene of a COVID-19 testing site established at Whitfield Regional Hospital. The test must be requested by a primary care physician. Testing at the site began Monday and will continue seven days a week, from 9 a.m. to 1 p.m. 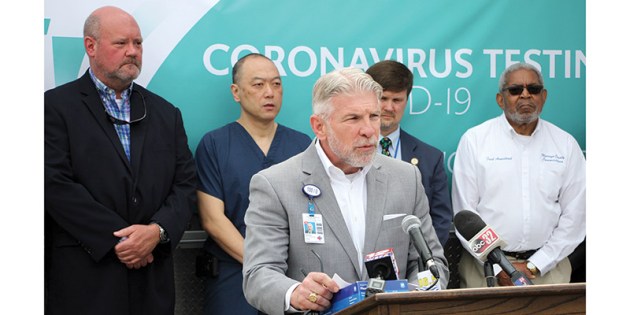 Several health and public officials were updated on the latest developments of the county’s, local municipalities’ and other organizations’ responses to COVID-19 during a meeting on March 16.

Dr. Ronnie Chu of Demopolis first informed attendees of the virus itself, explaining that the vast majority of patients recover.

“Eighty percent of the time, the patient is okay,” he said.

Elderly residents are more susceptible to the virus and any severe symptoms related to it, as are those with other conditions such as diabetes or those who smoke.

Chu also said he thinks Marengo County will not be as impacted by the coronavirus because people and businesses are more spread out than an urban area, making it more difficult for the disease to spread.

He briefly explained the precautions his clinic is taking. The Chu Clinic staff has split the waiting room into two sections with one being specifically for patients with cold and congestion symptoms that are similar to what patients with COVID-19 exhibit. They are given masks and later given tests to determine the cause. If the coronavirus is still a possibility after other illnesses are ruled out, they are sent to the hospital for testing and then into self-isolation until the results return.

Doug Brewer, CEO of Whitfield Regional Hospital, which is now at emergency staffing, also addressed the hospital’s response to the virus. With some of the most susceptible members of the population under their care, hospital staff have focused largely on risk mitigation, including limiting visitors and checking the temperatures of everyone before they enter. The wellness center has also been closed, and volunteers in the hospital’s auxiliary have been sent home. The purpose of these steps is to make the hospital safer for the other patients that it treats during the outbreak.

“We’ve got to stay here and be ready to take care of anybody regardless,” he said.

Barbara Etheridge, Alabama State Health Department Southwest District public health and emergency preparedness director, said that as of Monday, no hospitalizations have occurred as a result of the virus. By press time on Tuesday, there were still no hospitalizations reported in Alabama. She recommended staying at home if sick, reevaluating travel plans and avoiding large crowds.

Etheridge also thanked Whitfield Regional Hospital for being a test site because it has been a priority of the Marengo County Health Department to get one in the area. She also reported that most nursing homes are barring visitors and monitoring staff in order to protect the residents.

If someone is not following self-isolation precautions, the health department can obtain an official quarantine letter from a legal team and send the patient home.

Brewer also mentioned that masks should only be used on the individual suspected of having or who has the virus and not on someone who is healthy. He also said that if the symptoms are not acute to call prior to coming to the hospital to prevent spread of the disease. As there is no cure, treatment is only applicable when the virus causes acute situations, during which the acute issues would be treated and not the virus itself.

WRH currently has six ICU beds, with plans to acquire a seventh, and plans are in place that would allow an additional 10 should more be needed.

Brewer’s main concern at the moment relates to ventilators. There are two at the hospital, and Commission Chairman Freddie Armstead said Alabama State Senator Bobby Singleton was working on seeing if more could be provided.

Armstead said he was also interested in seeking permission to use the National Guard Armory in Demopolis to house patients, but Brewer said equipment is a higher priority.

Demopolis Fire Chief Keith Murray asked how first responders can protect themselves while responding to calls of those who may be sick. Brewer advised to wear gloves, place masks on the patients if possible and notify the hospital if they are bringing someone in who may have COVID-19. Owner of Amstar EMS Kevin Horne also said that there is a list of questions available to ask during calls to determine the likelihood of the patient being infected.

Brewer also said the best course of action for the Marengo County Jail would be to isolate an infected inmate.

Demopolis Mayor John Laney said that all day-to-day functions would continue, but many public gatherings will be cancelled or postponed.

“The only thing that we’ve had curtailments on is anything having to do with public events,” he said.

Armstead also notified attendees that seniors who utilize meal delivery services will still be able to benefit even as the sites close because the county transport systems will deliver the meals. The commission office will also soon determine work hours and personnel limitations.

Both the probate and the revenue offices offer all of their services online as well. Probate Judge Laurie Hall was awaiting information on whether the run-off election on March 31 will be postponed at the time of the meeting. On Wednesday, March 18, Gov. Kay Ivey’s office announced that it would be rescheduled for July 14.

On behalf of Singleton, Armstead requested that churches limit or not hold services to help prevent the spread of the disease.