When Sweet Water High School Baseball Coach Craig McDaniel first met student and athlete J.T. Etheridge two years, he knew that J.T. stood out from the rest for a reason.

He is reliable, works hard and has led other players by example. Though he excelled as pitcher and on first base, J.T. never let it get in the way of his studies and his 3.98 GPA.

All this and more led J.T. to be a recipient of the Bryant-Jordan Student-Athlete Award, the honor presented by the Alabama Sports Hall of Fame in conjunction with the Alabama High School Athletic Association. J.T. was one of 104 student athletes honored with the statewide award.

“It made me feel like everything I’ve done has been rewarded,” he said. 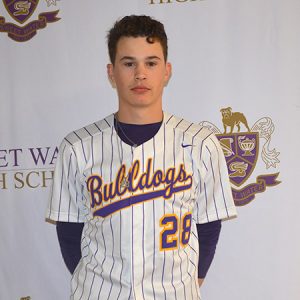 J.T. Etheridge, a Sweet Water High School Senior and baseball player, was one of 104 students in Alabama to receive the Bryant-Jordan Student-Athlete Award.

J.T. has attended SWHS since he was in kindergarten, and first took up baseball at the school in the seventh grade before moving on to the varsity team in the eighth grade. He is a well-rounded student also involved in FCA and the Beta Club.

J.T. first learned of his honor via letter from the Bryant-Jordan Student-Athlete Award Program. He was also invited to a banquet in April for the achievement.

“It felt great. I felt honored that they chose me,” he said.

He admits that the balancing act is tough for his sports and academics, but his teachers’ and coaches’ support has made it easier for him.

His work ethic stems from his father, Morris, who J.T. said is his role model.

“He’s always worked hard, and I feel like I’ve seen that and tried to do my best to make him proud,” he said.

McDaniel said that J.T.’s work ethic is the same on and off the field, and that is the reason for his achievements.

McDaniel also said that J.T.’s fellow baseball players watch him and try to follow his example and that he is proud to have coached him.

“He’s a good baseball player, but he’s an even better young man. I feel privileged to be around him every day, He makes me a better coach.”

J.T. signed a baseball scholarship to attend Meridian Community College in November and plans to transfer to a larger school after two years. He is the son of Morris and Daphne Etheridge.

(This article originally appeared in the Wednesday, March 11 issue of the Demopolis Times.)