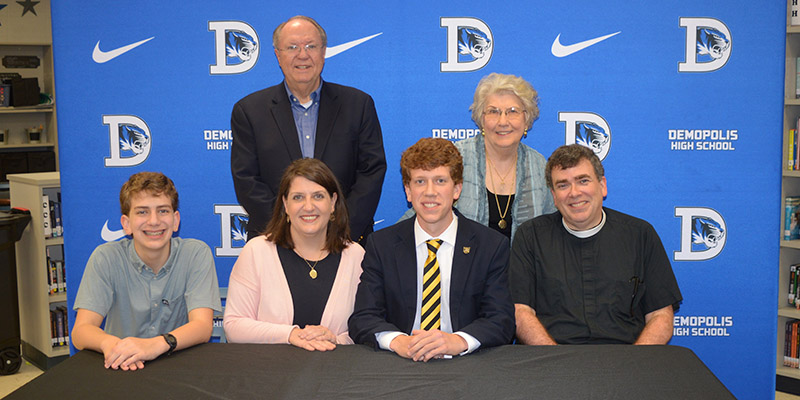 Joseph Barnes was joined by friends and family members to celebrate his appointment to West Point. Pictured are, from left, (back) grandparents David and Carole Caroll; (front) his brother Samuel, mother Amanda, Joseph and father John David Barnes.

“I just feel like the army was the right place for me,” Joseph said.

After receiving appointments or a letter of assurance from other major military academies, he chose West Point with the end goal of becoming an officer in the army, though he has not decided specifically which army career path he wants to follow.

Joseph has been interested in a career in the army for years and has been working a full four years, since he was in the ninth grade, to receive this appointment. He was nominated by Sen. Doug Jones and Rep. Terri Sewell.

Joseph will study for four years at the academy followed by six years of active duty.

“Your appointment to the Class of 2024 is an outstanding accomplishment. In gaining admission, you have demonstrated exceptional potential for future service to the United States Army and the nation,” the letter read, signed by Lt. Gen. Darryl Williams, who is the superintendent of the military academy.

DHS soccer coach Clint Humphrey also gave a short speech describing Joseph’s character during his time coaching him. “I’ve never met a more driven kid,” he said, adding that Joseph will be a valuable addition to any institution, company or community that he joins in the future.

DHS Principal Blaine Hathcock noted that Joseph’s strong drive and sense of purpose make him unique and in line with the “best of the best” that the military academy receives. Superintendent Kyle Kallhoff also complimented Joseph’s goal-orientated nature. “Whatever he sets his mind to, he achieves.”

Joseph thanked everyone who came to support and celebrate with him.

“Whether you think that you did or not, you all have made a big impact on my life, and that’s something that I can never really repay,” he said. “West Point is something that I’ve worked towards for a long time, and the feeling to get that appointment letter and be able to go is a great feeling.”

Joseph continued, saying that, though he’s worked towards this accomplishment for years, it’s not something he would have been able to do without the support of everyone who was celebrating with him. He ended his speech with a reference to the annual Army vs. Navy college football game which served as his first introduction to West Point, “Beat Navy!”

(This article originally appeared in the Wednesday, March 18 issue of the Demopolis Times.