Cynthia (Cindy) Long Meador, 84, longtime resident of Uniontown, Alagama;  Montgomery, Alabama and more recently of Daphne, Alabama, passed away on May 1, 2020 after a long struggle with dementia.  She was a lifelong member of First Presbyterian Church of Uniontown. 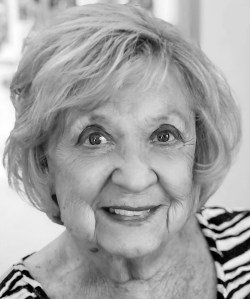 She was the daughter of Henry Coleman Long and Avery Davidson Long, who preceded her in death. She is preceded in death by her son Ralph Davidson Meador and stepmother, Annie Mae Long. She is survived by her sons William Volandt Meador, Jr. (Catherine) and Coleman Foster Meador (Katy); grandchildren Mary Catherine Masters (David), William Volandt Meador, III (Emily) and Davidson Coleman Meador; great grandchildren Thomas Lane Meador and Ann Foster Meador, goddaughter Margaret Rankin Byrd and beloved nieces, nephews and cousins.Cindy attended Uniontown High School, Mary Baldwin College (Staunton, VA), University of Alabama where she was a member of Kappa Delta sorority, Oxford School of Drama in London, England and Auburn University of Montgomery. She was a beloved substitute teacher in her hometown of Uniontown and later a fulltime teacher of drama at Montgomery Academy.  She was committed to her volunteer work with the Aid to Inmate Mothers (AIM) program at Julia Tutwiler Prison, which helped her earn the Junior League of Montgomery’s designation of Senior Volunteer of the Year in 2004.

Cindy never met a stranger and hugs were many and heartfelt. She was known by many names: Aunt Cindy to many (even non-family – because everyone she loved was family), Memommy to her grandchildren and many others, and The Queen – because she was.

Cindy was the essence of southern grace, style and beauty.  She was a ferocious competitor who threw herself wholeheartedly into whatever she did.  She added flair and sparkle to whatever she touched. Her true loves were her family (especially her grandchildren and great grandchildren), Auburn football, theater and acting, music, dancing, tennis, playing the piano, travel, the beach, reading, movies, cooking, and teaching children to swim. Every song she sang was full voiced and generally off-key. She didn’t care. She loved life and she will be missed beyond measure.Due to current restrictions, a private, graveside service will be held on Tuesday, May 5 at Rosemont Cemetery in Uniontown.  To celebrate Cindy’s life, donations may be made to any of the following: