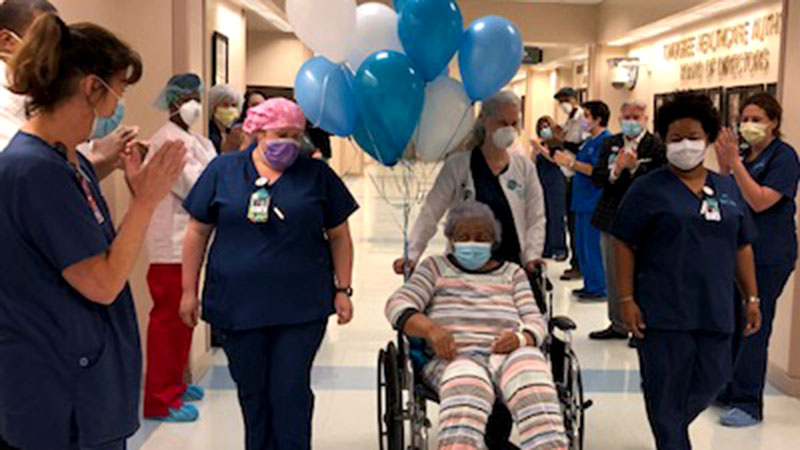 A Marengo County woman has fully recovered from COVID-19 and was discharged from Whitfield Regional Hospital on Saturday, April 25.

Mary Brothers is the first in-patient coronavirus patient to recover at WRH. Brothers left the hospital to applause and well wishes after having been with WRH since being admitted near the end of March. Brothers became ill near the end of March and went to the hospital with what was initially thought to be a sinus infection. But after her test results came back, it was revealed that she had COVID-19.

Brothers’ daughter, Aretha O’Aku, said her mother had the usual symptoms of the virus.

“She was more than mildly sick, and she had the telltale symptoms like fever and sweating,” said O’Aku. “Of course, during these times, you can’t go inside the hospitals to see for yourself how a loved one is doing. So I had to rely on the nurses to tell me what was going on and how she was doing.”

O’Aku says her mother feels much better after her discharge and is grateful to be home where she can resume her regular routine that includes exercising, cooking, and gardening.

“My mother is very active even at her age. She likes to move around and keep busy,” said O’Aku. “Cooking is one of her favorite things to do, so she’ll get to start doing that again.”

To prevent her from getting the virus again, Brothers and her family are taking precautions to help her stay healthy. O’Aku said they have gathered up masks, hand sanitizers, and gloves to use when they are in public and around other people. They will also adhere to strict social distancing and limit how often her mother goes out as well as how many people can visit her home.

“We’re going to take every precaution to make sure she doesn’t catch the virus again. We, her family, are also going to take extra precautions to protect ourselves and stay healthy,” said O’Aku.

COVID-19 cases up to 66 in Marengo County; additional…