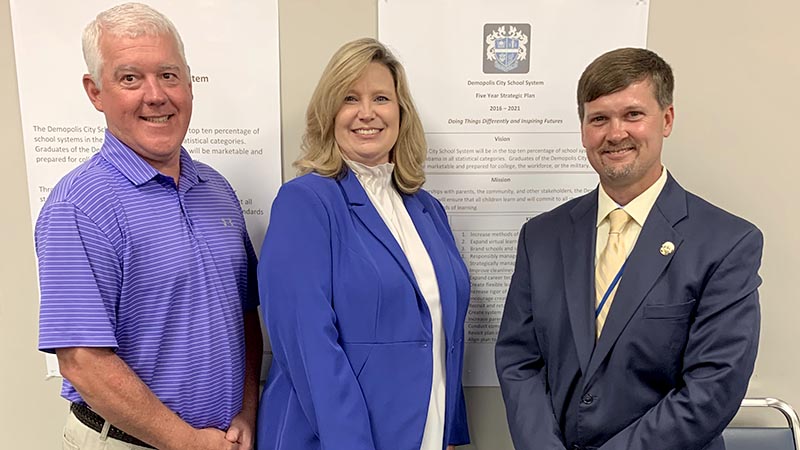 Terina Gantt, center, is the new principal at Demopolis High School. She is pictured with her husband, Eddie Gant, left, and Demopolis Superintendent Kyle Kallhoff.

Terina Gantt has been named the new principal for Demopolis High School.

Gantt is a 24-year educator who has served in capacities ranging from a collegiate volleyball coach, a middle school science teacher, and for the past three years was an assistant principal with Pike Road Schools.

A native of Jasper, Alabama, she earned a bachelor’s degree in education from Faulkner University as well as a master’s degree in Education Instructional Leadership from Jacksonville State University.

“I thank everyone for this opportunity; My family is beyond excited,” Gantt told members of the Demopolis Board of Education during a meeting Monday. “I’ve been in education a long time and when you’re in education you tend to make connections with a lot of people. Every person I’ve spoken with over the last three weeks, talking about this position, had tremendous things to say about the positive direction of Demopolis schools. I promise to work as hard as possible to continue that improvement.”

“We interviewed four strong candidates and collectively we feel confident about the recommendation tonight,” Kallhoff said.

The board unanimously approved accepting Gantt as principal as well as her contract.

“I look forward to getting her here and embedded in the day-to-day operations at the high school. I feel she will compliment some of the hard work that is taking place at our high school and assist in closing some of the gaps that currently exist. She is goal oriented, results-driven, collaborative, and thinks outside of the box, which are all characteristics needed to be a successful high school principal,” Kallhoff said.

Among Gantt’s top priorities at DHS will be meeting with the administrative staff, faculty and student groups.

“My goal will be to continue the culture of excellence and the positive trajectory at Demopolis High School,” she said.

Gantt is married to Eddie Gantt, also an educator, and they have two sons, Jackson, a 21-year-old who attends the University of Auburn-Montgomery and plays baseball for the Warhawks, and Joseph, 16, who will be a junior at DHS this coming school year.