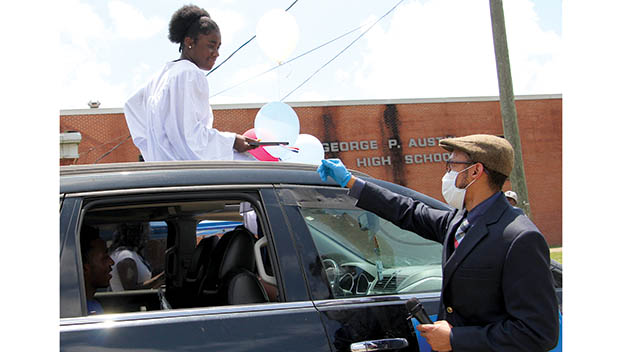 George P. Austin Middle School Principal Walter Hampton presents a certificate of graduation to one of the students who will be moving on to high school next year.

Due to the pandemic, the drive-by commencement ceremony took the place of the school’s traditional ceremony. School faculty said they did not want this graduating class to feel left out or overlooked and wanted to give them some form of celebration. About 20 students participated in the ceremony and received their diplomas.

“We wanted to do the traditional celebration, but of course, that’s risky right now,” said principal Walter Hampton. “So we thought that a drive-through celebration would serve the purpose of showing the kids that we appreciate them and recognize the hard work they’ve done over the past three years.”

The ceremony began with a parade for the graduates that started at the school and went up to the main road before returning to the school parking lot where they were given their diplomas.

“It was a surprise for the students. They didn’t know about it, and many of them assumed they wouldn’t get any kind of celebration,” Hampton said. “They’ve been so disconnected from school since mid-March that none of them even thought about a ceremony. So this was just one of the things that we did to bridge the gap and give them a sense of normalcy.”

The turn out for the event was more successful than Hampton had anticipated.

“I was surprised at how well everything went with it being a non-traditional ceremony, and getting the word out was difficult with our students being all over the place,” said Hampton. “But we had several community members come out to help us set up and keep things running smoothly. It took a lot of effort, but we pulled it off without too much trouble.”