TUSCALOOSA, Ala. – After more than 30 years of sponsoring public telescoping, The University of Alabama Observatory closed to the public because of the coronavirus.

The UA Department of Physics and Astronomy returned access to its powerful reflecting telescope in the observatory atop Gallalee Hall through what’s been dubbed Pandemic Public Nights, a digital viewing through the telescope. 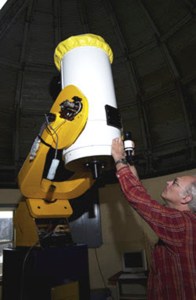 The first Pandemic Public Nights is available on the department’s Vimeo channel, and the department will share links to future digital viewings, which are captioned, through its social media channels.

“It’s a good opportunity for people to get their space fix,” said Dr. William Keel, professor of astronomy and physics.

The telescope is controlled by a computer, and can be operated remotely, so Keel said faculty in the department thought recording or livestreaming what is seen through the telescope would be a good way to avoid crowding the observatory.

“In the past few months, cramming people together into the observatory dome, which is 30 feet in diameter, seemed like a really bad idea due to COVID-19,” Keel said.

The department has a webcam have a webcam and a moon map, so different faculty members can discuss what people see on the video.

“We’ll do things like look at the moon and view where moon bases were, where Apollo 11 landed, where a lava flow overwhelmed a side of a crater, where a media shower damaged it and more,” Keel said. “The other good thing is by doing it digitally we don’t have to worry about Tuscaloosa’s wild weather, which has canceled a lot of our viewings.”

Another benefit of digital stargazing is it won’t just be UA’s campus telescope used for Pandemic Public Nights. Since UA is part of a group of universities that remotely operates telescopes on three continents, which, along with Tuscaloosa in North America, includes Arizona, Chile in South America and the Canary Islands off the African coast, Keel said for public access to all of the telescopes.

Two big upcoming astronomical events to look forward to this year include the solar eclipse on June 21 that can be seen over central Africa, Asia, the Pacific and southeastern Europe, and the once-in-a-generation “Great Conjunction” on Dec. 21 in which Jupiter and Saturn align in the sky.

Though Keel said the solar eclipse won’t be something UA’s telescopes will be able to capture – the visibility of it is just out of range – the Great Conjunction will be.

“Right before Christmas, Jupiter and Saturn will be lined up from our view point so close that it will look like they’re side-by-side,” Keel said. “This is very rare. Jupiter has lapped Saturn before only once in my lifetime.”

The University of Alabama, the state’s oldest and largest public institution of higher education, is a student-centered research university that draws the best and brightest to an academic community committed to providing a premier undergraduate and graduate education. UA is dedicated to achieving excellence in scholarship, collaboration and intellectual engagement; providing public outreach and service to the state of Alabama and the nation; and nurturing a campus environment that fosters collegiality, respect and inclusivity.