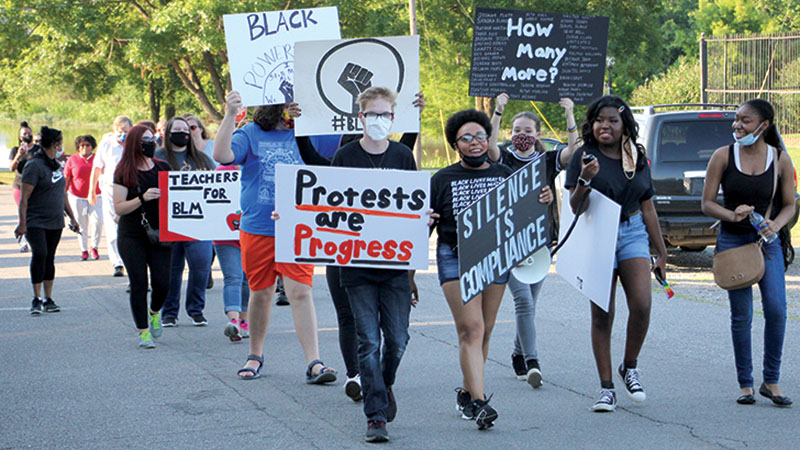 A group begins a march from the Demopolis City Landing to bring awareness to the Black Lives Matter movement.

A student-led group named “Protest is Progress” organized a march Friday in Demopolis as part of the Black Lives Matter movement.

Zoie Sewell, a graduate of Demopolis High School, was among the organizers of the march and formed the Protest is Progress group.

“Racism is an issue nobody wants to talk about, especially in our town of Demopolis. Honestly, it is sad and very disappointing. I ask you to educate yourselves on the matter because no one is born a racist, it is taught. If our generation wants to be the one to break the chain of racism and injustice that were shackled onto us by past generations we need to stand up, speak out and educate,” Sewell said to the group prior to the march. 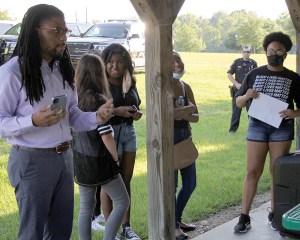 Speaker Tristan Mullen, surrounded by organizers of the Black Lives Matter rally, said the diversity of those in attendance gave him hope and explained the purpose of “Black Lives Matter.” “We just want to make the point that black lives do matter and our voices deserve to be heard,” he said.

Another student speaker, Marianna Boutwell, said the time has come for changes to end police tactics that resulted in the recent death of George Floyd and others before him.

“All over the country protests are being held, and will continue to be held, until this issue has been resolved and police brutality has been brought to an end. How many more people must we lose before a change is made?,” Boutwell said.

Tristan Mullen, a 2018 graduate of DHS, said he was proud to see a protest being held in Demopolis, especially in seeing both black and white participants.

“When people say that small towns in the rural south cannot be inclusive, do not value diversity, this proves it is a lie and it can happen anywhere,” Mullen said. “I’m happy to see this event being held in my hometown. It was approved by our city leaders, and we are progressing as a community in the right direction. I could not imagine something like this taking place five to 10 years ago.”

Mullen went on to explain the purpose of the “Black Lives Matter” mantra.

“In no way is it to insinuate that all lives don’t matter. I believe as we have these collective conversations, we must be slow to take offense and quick to work toward reconciliation.   What we are saying is that by being white, you’ve had the deck stacked in your favor instead of against you. When we say black lives matter, it is because we are frustrated and angry that after all this [Civil Rights Movement] we find ourselves dealing with things that we thought were behind us. We just want to make the point that black lives do matter and our voices deserve to be heard,” he said.

Student and another event organizer, Keyerra Jones, encouraged people to join together to make meaningful change.

“If we don’t start speaking up about the injustices we face, we are going to live in a world where they will continue. If we are not willing to fight for our rights, who is going to fight for us? I’m not just talking about marches; we need to change the laws across this country that oppress us a a people,” Jones said.

Josh Rankin, a student organizer of the protest, said the march was intended as a peaceful way to bring awareness to racial injustice.

“We are here today not just to show our support for Black Lives Matter but also to speak out against the violent murders of Ahmaud Arbery, George Floyd, Breonna Taylor and all the other innocent lives that have been taken as a result of police brutality. We encourage you to support the movement through your voice, your wallet and your vote. We hope to build a better nation,” Rankin said.

He went on to thank the police department and city council for their assistance to properly file for a public assembly event. Police were also on hand during the event and cleared the march route for the protestors.

Rankin said the Protest is Progress have donation collection points at several businesses in Demopolis. Those funds will be donated to the Breonna Taylor Fund, the National Black Lives Matter Fund and a fund established benefitting black-owned businesses in Chicago.

After the speakers, the group gathered and marched south from the City Landing on Main Avenue to the downtown area where they turned around and marched back to the landing.