A native of Thomaston in Marengo County, he was born April 30, 1924 in the house across the street from his final residence. “Jim,” as he was known to family and friends, and “Papa,” to his grandchildren, was the son of the late Clarence Crenshaw Pritchett, Sr. and the late Lora Anna Cannady Pritchett of Thomaston. 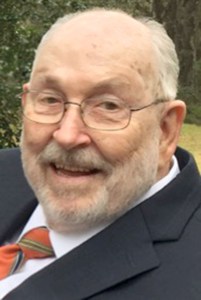 Educated at Thomaston Elementary School, he was a graduate of Marengo County High School in Thomaston, and Auburn University (AU).

Jim’s education at Alabama Polytechnic Institute (API), as AU was known then, was cut short during World War II. In the U.S. Army Air Corps, he attended Officer Candidate School, Wofford College in Wofford, SC, trained as a pilot in Lafayette, LA, in the “Vultee Vibrator” BT13 planes while at Walnut Ridge, AR, earned his wings from the flight training program in Stuttgart, AR and was an instructor pilot in Greenville, MS. The majority of his flight time thereafter was as a pilot in the C-47, nicknamed gooney bird by the troops. In addition, he volunteered for a mission as a troop-carrier glider pilot during Operation Varsity.

Before shipping out to England and the European theater of war, Jim met his true love, Becky, while visiting Greensboro College in NC. He went with a fellow Army buddy to visit a family friend who then introduced them to her roommate, Becky. At their first meeting, he told her he was going to marry her—and he did, August 25, 1945.

After World War II, he returned to API, but left a second time (with only one quarter remaining to graduate) to work for the Internal Revenue Service to help support a growing family. In 1957, Jim returned to his hometown to work at Planter’s Bank & Trust Company with his brother, Buddy, president of the bank.

With Becky’s encouragement, he completed his remaining course credits in 1976, just in time to graduate from AU along with his youngest daughter Lora, who was very surprised to hear his name announced at her graduation. He has proudly flown the AU flag at his home ever since.

Jim also attended Louisiana State University School of Banking of the South. Dedicated to the bank and the community it served for over four decades, Jim retired as president and CEO. He continued his military service with the Alabama National Guard 156th MP Battalion in Linden, AL, including calls to active duty, and retired as a Lt. Colonel after 20 years of service. Jim was also a public accountant for over 35 years.

He served as president of Group 6 of Alabama Bankers Association, chairman of the International Industrial Committee of Alabama Bankers, and was a member of the Federal Reserve Bank of Atlanta’s Financial Institutions Advisory Committee. He served as president of Lions Club, was a member of the Town Council of Thomaston, the Thomaston Volunteer Fire Department, United Methodist Church (UMC) of Thomaston, the UMC board of stewards, and served on the board of directors of Linden Country Club. During his term as a director of the Marengo Hospital Board, the Marengo Nursing Home in Linden was established and built.

When he wasn’t reading banking journals and new regulations, he enjoyed fishing on Alabama rivers, golf, photography, electronics, desktop computers, art and travel. He built a hi-fi set when that was a new development in home entertainment, and was an early adopter of email, enjoying electronic correspondence with friends, relatives and military history groups and enthusiasts in far places.

Jim was preceded in death by his wife of 66 years, Rebekah “Becky” Barnhardt Kirkman Pritchett. He leaves a legacy of sound guidance and high standards of character, integrity, kindness, gentleness, good humor and friendship. Nieces, nephews, students and friends of his children all knew they could depend on him and were welcome in his home. He was beloved by many generations: father to five, grandfather to eight, great-grandfather to ten, and was a beloved uncle to over two dozen nieces and nephews. Children are James E. Pritchett, Jr.  (Paula) of Foley, Alabama; Amy Worth Pritchett of Jacksonville, Florida; Anna Pritchett Gordon (Donald) of Trussville, Alabama; Lora Pritchett Holcombe (Randall) of Tallahassee, Florida; and David Kirkman Pritchett of Thomaston.

For innumerable hours of kind and dedicated care, the Pritchett family is grateful to Valria Cade of Thomaston, Bertha Dixon of Thomaston, Park Thetford Chittom, MD, of Selma, AL, Park Place Nursing and Rehabilitation in Selma, Amedisys Home Health in Demopolis, and SouthernCare New Beacon Hospice of Demopolis. Continuing the excellent example Jim set for his children in caring for Becky after her strokes, David Pritchett, has been the devoted and consummate family caregiver.

A private memorial service will be at the residence of James E. Pritchett Jr. in Foley, Alabama. Reverend John Nunnally will officiate. Cremation service is by Charter Funeral Home of Calera, Alabama.