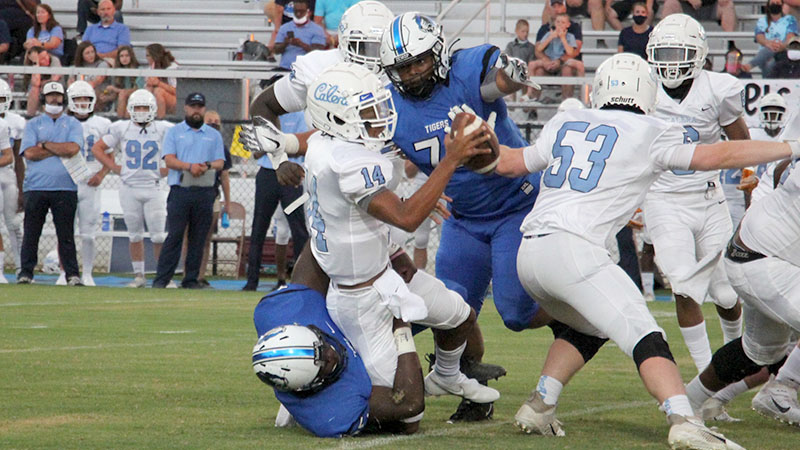 The Tiger defense records a sack.

It took over three quarters, but the Demopolis Tigers found their footing just in time to come from behind and claim a season opening victory over the Calera Eagles, 14-12. 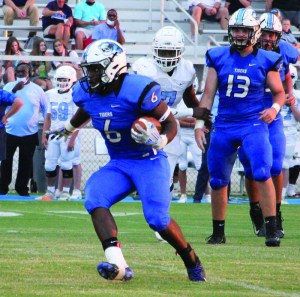 Both offenses got off to sluggish starts, but Calera got an early boost from its defense late in the first half. With Demopolis deep in Eagle territory, Art Amos picked off a Hayes Atkins’ pass at about the 3-yard line and returned all the way, giving Calera a 6-0 lead at 1:42 in the second quarter. The point-after attempt was no good.

Calera increased their lead in the third quarter when Kobe Prentiss hauled in a pass and broke several tackles for a 38-yard touchdown. A two-point conversion attempt failed, but the Eagles held a 12-0 lead.

The Tiger offense began to find success early in the fourth when senior Tyler Drake — the Tigers’ third quarterback of the night — hit Cameron Wright for a 40-yard gain to the 2-yard line. Two players later, Graig Nichols capped off the drive with a touchdown, cutting the Calera lead to five, 12-7, after Cole Wilson’s successful point-after. 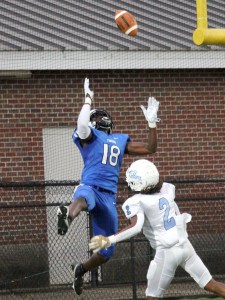 Peyton Stevenson shows his athleticism coming down with this catch, although it was ruled he came down outside the endzone.

The Tiger defense held Calera on the following series, forcing a punt that was returned by Jim Lawler to the 50. From there, Drake went to the air again finding Vincent Deas across the middle for a 15-yard gain. Nichols followed with a 15-yard pickup on the ground. On second down and seven, Drake hit Peyton Stevenson in the endzone for the go-ahead touchdown. Wilson’s PAT made the score 14-12 with 4:56 to go.

Calera’s hope for a comeback ended when Jay Jones, a Tennessee commit, hauled in his first interception of the year to secure a victory for the Tigers.

DHS Head Coach Brian Seymore said that while the team has plenty to work on ahead of a road game next week, he is proud that they kept fighting.

“We had more energy later they really showed some resolve in coming back. We just needed to relax. There were a lot of mistakes and that’s something we’ll clean up before going to play a good McAdory team,” Seymore said.