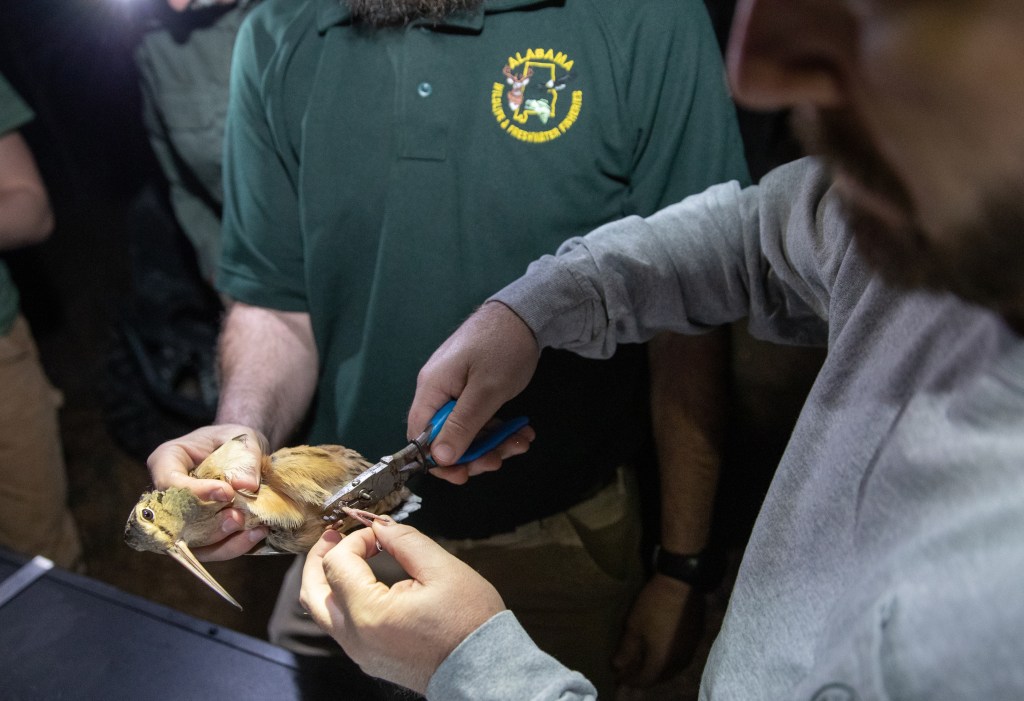 Maddox, the Alabama Wildlife and Freshwater Fisheries (WFF) Division’s Migratory Gamebird Coordinator, will be on a mission to continue a woodcock tagging program to determine migration routes as well as conduct genetic studies on the birds also known as timberdoodles.

The woodcock is a migratory bird similar in size to the bobwhite quail but with a long, slim bill. The birds winter in the Southeast, which means Alabama will have a population of woodcock during the winter hunting seasons. As soon as it starts to warm, woodcock head north to their breeding grounds.

Maddox and WFF are working with the Eastern Woodcock Migration Research Cooperative to trap birds and attach transmitters that will track movement. For the first time since 1985, woodcock were trapped in 2020 in Alabama to become part of the study, which is spearheaded by the University of Maine.

“These studies will narrow down key factors, like stopovers on the migration routes. It will determine if they have to travel farther because the habitat has been degraded or lost over the years.”

In February 2020, Maddox and crew went afield with spotlights, a thermal camera and the long dipnet.

“Once we locate the woodcock, we use the spotlight to try to disorient it for a minute,” he said. “We move forward, shaking the light to get close enough to catch the bird with the net.

“It’s not quite like a snipe hunt, where you have a cloth bag or burlap sack,” he said, referring to the prank where some unsuspecting individual is left in the middle of the woods holding the bag.

Maddox said last year they saw hundreds of woodcock, but they proved very difficult to capture.

“We ended up catching 13 birds,” he said. “We had seven transmitters to deploy, and we deployed all seven. We put four transmitters on females and three on males. The transmitters (less than the size of a quarter) on the females will give us information on nest success on the breeding grounds.

The woodcock population is confined to the Eastern U.S., bordered by the Mississippi River to the West, the Canadian Provinces of Manitoba, Quebec and Novia Scotia to the north and Florida to the south. Maddox said where the prairie starts to the West is where the woodcock population ends. One of the birds tagged in Alabama last year traveled 2,100 miles into Manitoba. The woodcock are managed in two management regions, the central and eastern. Alabama is in the central management region.

“Woodcock are prevalent in the eastern U.S.,” Maddox said. “Alabama, being in the center of the Southeast, is kind of like a funnel for the birds that come from Minnesota, Michigan, Maine, Quebec, New York and Pennsylvania during their winter migration. We have a lot of habitat for woodcock with our woods and timber harvest operations.”

Maddox said ideal habitat for woodcock is forests that have been manipulated.

“Logging operations really help,” he said. “Every time you clear-cut a patch of land, when it starts coming back up, that first five or 10 years provides the ideal cover for woodcock. When the trees get tall, the woodcock don’t use it as much because there is less underbrush.”

Alabama has a 45-day woodcock season with a three-bird daily bag limit. A few hunters specifically target woodcock, but most are incidental harvests by quail hunters. Woodcock is a federally managed migratory species.

“Typically, woodcock hunting involves a pointing dog, kind of like quail hunting,” Maddox said. “But woodcock prefer thicker habitat along streamside management zones. You really have to get into the habitat because the birds hold very tight. It’s hard to hunt them without a dog.

“Their main source of food is earthworms. They use that long bill to probe into the soil and pull those worms out. They need really loose, moist-soil habitat that is found in bottomland areas. They’ll be along the water edges in thick cover. They won’t be in standing water, just a moist-soil environment where there is thick cover.”

Other hunters may encounter woodcock when pursuing other game.

“This time of the year, hunters see them from their deer stands or when they are walking to and from their stands,” Maddox said. “You’ll see woodcock feeding in the mornings or at night and after rains in harvested agricultural fields.

“You might also see the males doing a mating display, known as the sky dance, where they jump and fly 50 feet off the ground. As they fly in an arching pattern, the wind passing over their wing feathers will make a distinctive musical twitter sound. Their call is a peenting sound, which is sort of like a buzz. It sounds a little bit like an insect, like a cicada. While the birds are down here, they are pair bonding. The male is trying to attract a female with the displays. Then the pair will migrate north and establish a nest.”

According to the WFF hunter survey, about 300 hunters take advantage of the woodcock season with an average annual harvest of about 2,000 birds.

“The big harvest states for woodcock are Michigan, Wisconsin and Minnesota,” Maddox said. “I think most of our woodcock are taken by hunters who are probably not targeting woodcock. They are likely targeting quail.

“With the quail population at low levels, hunting woodcock could be a good way to get your bird dogs out and get some exercise. We have woodcock on lots of our WMAs (wildlife management areas), and you probably won’t run into many woodcock hunters. You’ll likely have it to yourself.”

PHOTOS: (Billy Pope) A small transmitter is attached to the woodcock to track migration routes. WFF biologists attach a leg band to one of the 13 woodcock that were captured in 2020. WFF Migratory Gamebird Coordinator Seth Maddox releases a woodcock that had been banded.