On Tuesday August 3, the U.S. Senate unanimously approved an amendment adding congressional authorization of the full Interstate-14 five-state corridor expansion to the pending Bipartisan Infrastructure Package. In Alabama, the completed I-14 would run through Demopolis, Selma, and Montgomery, before exiting the state south of Opelika. The interstate would end at Augusta, Georgia. 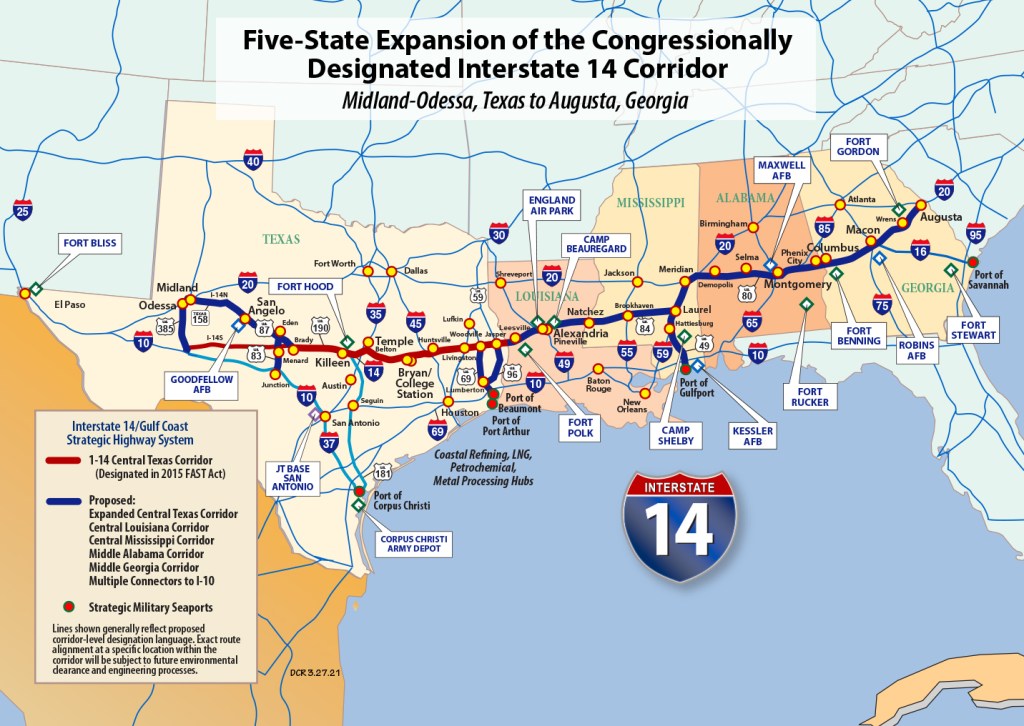 The package still needs to be approved by the House and the Senate and signed by President Joe Biden before becoming law.

A press release from Selma Mayor James Perkins, Jr.’s office said he and his leadership team had been conversing with state and national officials, lobbying for an interstate through the Blackbelt Region of Alabama, including Selma.

“I am hippopotamus happy and peacock proud about this,” Perkins said in the release. “I have pushed for an interstate for Selma for over 30 years. Well folks this is the new plan. Thank you, Honorable Governor Kay Ivey and Alabama Department of Transportation Director, John R. Cooper.”

“We applaud the bipartisan eff01ts of the Senate and urge state officials to supp01t this key infrastructure project, which would allow the people of Selma and the Blackbelt region to reap much-needed growth and economic development benefits,” the release said.

In 2010 the results of a feasibility study on the extension of Interstate 85 to Interstate 20/59 conducted by Volkert and Associates projected, when finished, population in the eight counties affected by the extension would grow 16 percent, with Dallas County seeing the most increase in population. The region would also see a 37 percent increase in jobs, according to the study. At the time, the study’s projections were based on construction beginning in 2015, and being completed in 2030.

According to the study, the preferred route ran from Montgomery about seven miles south of Selma before it turned north of Uniontown, dropping back south of Demopolis and traveling west before ending just north of Cuba at Interstate 20/59. There has been no information released yet about whether I14 would follow the same route as was proposed in the 2010 study.

“I would like to see it take more northern route,” Dr. Ken Tucker, the dean of the University of West Alabama Business College said at the time. “There’s a lot of considerations you have to make in a project like this; environmental studies, social and economic impact and many others; but I think a more northern route would provide a greater impact to the cities we care about: Selma, Uniontown, Demopolis and Livingston and York.”

Many in Selma were not happy with the preferred route, which seemed to bypass Selma, instead expressing the desire for the extension to take a secondary route that would take it just north of, and closer to Selma. David Webber, an engineer with Volkert, said at the time the preferred route took into account the least amount of negative environmental impact along the course and avoided wetlands to the north of Selma.

A representative from The Alabama Department of Transportation said, if approved, the project would take years of study before construction would begin.

The amendment to the infrastructure package was sponsored jointly by Senator Ted Cruz of Texas and Senator Raphael Warnock of Georgia, and supported by all 10 senators along the corridor, which runs from Midland-Odessa, Texas to Augusta, Georgia.

“I applaud my Senate colleagues for supporting this bipartisan amendment to designate future Interstate-14 across Texas, Louisiana, Mississippi, Alabama and Georgia, so we can begin the necessary work to upgrade this road system and connect strategic military installations across our states,” said Senator Cruz.

Don Rodman, who is communications advisor and coalition administrator for the I-14/Gulf Coast Strategic Highway Coalition, said the importance of the addition of the I-14 project in the infrastructure bill is that it leads the way for actual work to begin on the project.

“Once you have it in the law, each state’s department of transportation can begin working on all of the steps required to create a section of interstate highway,” he said.

Rodman noted, if approved by the House and the Senate and signed by the president, it would still be a very long time before the I-14 project becomes reality.

“We are talking about a very long-term effort,” Rodman said. “Multi-generational. We have been working for 25 years on I-69, which goes across eight states and runs from Michigan to South Texas, and we still have many, many hundreds of miles to go on that project. It’s important that people look at this and think of it in terms of the leadership that needs to be provided today for what happens years in the future.”