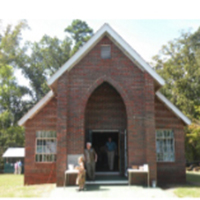 Mt. Moriah Fellowship Baptist Church, 193 years since its 1828 founding, invites you to join us on Sunday, October 10 with its second “Adjusting to Covid” Zoom Homecoming.

Presiding will be Don Carmichael, Jr. Please note that the service is on Sunday, October 10 at 2:00 pm, allowing time to attend your own church or its online service before joining Mt. Moriah in this special worship, music and Memorial Service. Please also note that there will be no one at the church, and no Dinner on the Grounds. But we promise you that you will not want to miss this special Zoom church service.

Participating in our Zoom Homecoming this coming “Second Sunday” of October will be the following: Moderating will be Don Carmichael, Jr. of Chelsea; devotions will be given by Don Donald of Pine Apple; Rev. Charlie Grenade of Rogue River, Oregon; Caroline Carmichael of Chelsea, a Masters student at the Beeson Divinity School at Samford University; special music: Jennifer Ellis of Baton Rouge, La; Robert Robinson of Birmingham; Gary Yeldell of Melrose, Florida; and Amanda Carmichael of Chelsea. 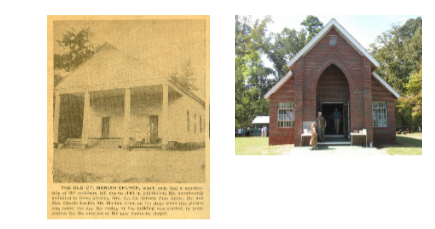 HISTORY LONG AGO AND PRESENT

The year was 1954. Mt. Moriah Fellowship Church, founded in 1828, was housed in its 106 years old second church building, erected in1848. When it was built, it had been pegged, not nailed, and set on solid, long lasting cedar blocks. Pioneering settlers of Butler Co., along with their children and grandchildren became members of this church.’

Many of their descendants who attended had been members and loved the fellowship and kinship among its membership. However, many of their young adults had moved to other locations for careers until there were only three living enrolled members living in close proximity, Claude and Rose Luckie, and Mrs. Lea Scott Watson.

On Sunday afternoon May 16th , 1954 at 3:30 o’clock a group of friends who had grown up worshiping in the church came together to see if the old building could be repaired. It was so far gone that it would cost more to try to repair it than to rebuild. By 1954 it was supported on disintegrating blocks of cedar and had splaying walls.

The old church was removed beginning on August 9, 1954. The photo above on the left at the beginning of this “history” was made the day they began to take it down and shows Frances Grimes and Claude and Rose Luckie on the steps. The “new” 1954-55 church, designed by R. W. Hagar, is above on the right, and was completed in ten months.

The affection for the old pegged church was deep and special efforts were made to salvage parts of the original building for use within the new church. The original 36-foot hand-hewn sills became the exposed beams, the 14-foot hand-hewn corner post of the old is in a corner of the new the old pews, made of “one inch, hand-planed beautifully stained heart pine” grace the interior of the new chapel. The pulpit set was donated to the old church by Dr. Erskine Grier Donald in 1895. It was restored by his daughters Louise Donald Robins, Frances Donald Dudley Grimes and Grace Donald Carmichael. The little foot pump organ, initially funded for the old church by the youth of the church was given by Miss Mattie Kendrick and was restored by her brother, Walter W. Kendrick. At the dedication of the new church building, it was

played by Mrs. Maggie Luckie Atkins who had served for many years as organist in the old church.

The new church chapel was ready for a huge celebration at its Dedication on June 12, 1955 with both a morning session and an afternoon session with C. J. Donald presiding at both. The newspaper estimated the crowd at about 600 for this event.

The morning session was the Dedication and worship service opened by singing “Amazing Grace” with an Invocation by H. Porter Martin. The History of the Church was given by Miss Mary Donald. Special music for the Dedication was contributed by Mrs. J. F. Seaton, Mrs. Dan Strickland, Lewis Waller and William Waller Jr., children of Mrs. Mary Luckie Waller. [Danna Strickland, one of the grand or great-granddaughters sings there currently with the annual church choir from several states.] The Cemetery Trust Fund of $5000 was discussed by Dr. D. C. Donald in which he encouraged contributions to help raise it to the level of $10,000. Mrs. Harold Grimes gave the Financial Report, stating that the new building had cost $8,816.15 and also told how the building came to be. Additional Special Music was by R. E. McWilliams, III. The Sermon was given by Dr. L. L. Gwaltney, Editor of The Alabama Baptist.

The day was divided by a huge dinner on the ground.

These recent three memorable years, 2017 (when Hurricane “Nate” caused the first cancelled Homecoming ever), 2020 and 2021 (Homecoming in both years was cancelled because of the Covid-19 pandemic) have made many of the current attendees of the Mt. Moriah Church long for our next normal routine “on site” Homecoming.

We miss our lovely little chapel, the annual autumn “Second Sunday” gathering of friends and family, delicious and overwhelmingly large “spread” of food on the table in the Arbor/Dining Room, Dinner on the Ground, the worship together, and the wonderful music provided by our “Yeldell Yellers. who provide us with a once-a-year bluegrass jam session outside the sanctuary. The beautifully trained voices and music during worship inside is provided by the same small group. These guys and gals hail from homes in Florida, Alabama, and Louisiana and range in age from their adolescence, then 20’s to their 50’s. There is no better music than that with “blood harmony” voices that have a special timbre that comes from kinfolk singing with kinfolk. They are all “cousins” even if it is 2nd , 3 rd , or 4th , not just “1st cousins.” it does not matter. That special sound of “blood harmony” brings us the best there is. And Blesses the Ties that Bind.