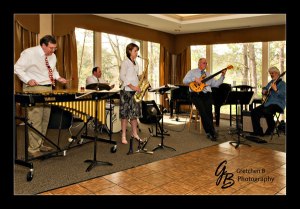 The Two Rivers Arts Council is set to host a Christmas Jazz Concert as part of Christmas on the River. The concert will be held on November 30th at 7:00 p.m. in the high school auditorium and it will be an hour long program.

The performing group is “Friends in Jazz,” a group of professional musicians from the Birmingham area. The person in charge of the group is Kim Bain, a professional saxophone artist. Bain is in her twelfth year as Director of Bands at Pizitz Middle School in Vestavia Hills, Alabama.  Ensembles under her leadership have consistently been cited for musical excellence at both the state and national levels throughout her 28 years of teaching.

Bain also received National Board Certification from the National Board for Professional Teaching Standards in November 2010.  She has served as a clinician for the Alabama Bandmasters Association and guest conducted numerous honor bands and camps in Alabama, Mississippi, and Georgia.

Other members of the group include Chris Moore who is on drums, Josh Voyles is the band vocalist, Ron Alexander is on bass, Chuck King on trumpet, and Choko Akin on the piano. Music for the concert will be Christmas Jazz and will feature temporary, traditional, Christmas hymns, and secular music.

Two Rivers Arts Council member Lydia Randall said that the concert will be the council’s gift to the City and the Christmas on the River celebration. She also said they are encouraging students at the high school and middle school to come, especially band students.

“We’re hoping to just share a little bit with the community, and we hope everyone will come out and have a good time with us,” said Randall.

Randall said the Two Rivers Arts Council has invited Mim Webb and Mayor Woody Collins to the concert due to their connections with the first COTR celebration fifty years ago. Also invited is Abby Grace Cameron who is this year’s Miss Christmas on the River Queen.

Randall said she is thrilled to be hosting the concert and is glad that the council is open to the public again after COVID-19 cancelled many of their events last year.

“I’m thrilled that we’re open again and can offer something to our community,” said Randall. “We want to give back to the city and become a part of Christmas on the River.”

Admission to the concert is free, but the Two Rivers Arts Council will be taking tax deductible donations at the door.