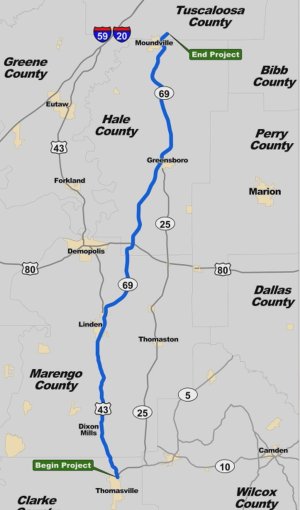 The proposed route for the West Alabama Corridor project could be detrimental to the city.

The West Alabama Corridor project isn’t just a concern for the residents in Linden, but for those in Demopolis as well. Mayor Woody Collins is concerned about the four-lane project, and how it will impact Demopolis going forward. He said he is “looking for thoughts, prayers, and opinions” on how to deal with the looming problems the project will produce for West Alabama.

“This Hwy. 43 project is a nightmare for Demopolis. A total nightmare. There will not be one single change in the Hwy. 43 route from Mobile to Thomasville,” said Collins. “That means that you ride through Jackson, Grove Hill, and Thomasville and pass every one of their restaurants, filling stations, and shopping centers. When you hit the outskirts of Thomasville, you can set your cruise control, and you don’t have to turn off again until you get to Tuscaloosa.”

“We have been told and told that this new 43 four-lane was there to benefit West Central Alabama. Unless they plan to build a paper mill in Gallion, it’s not going to do anything but kill us,” said Collins.

The West Alabama Project will only widen 28 miles of Hwy. 43, which is the portion of road between Thomasville and Linden. From the Linden Bypass up to Moundville on Hwy. 69 is 55 miles. Following this route, north-south traffic will miss Demopolis completely. Drivers coming up from Mobile will not have to pass through Linden, Demopolis, or Eutaw.

“I am probably one of the strongest supporters of Gov. Ivey and ALDOT. Gov. Ivey has done things that no one else has ever done, the people at ALDOT have been good to us,” said Collins. “I simply look at this as some very good friends with differences in opinion.”

Collins said he has asked several times where the new route will cross Hwy. 80, but has never received an answer. Without knowing where the new road will cross, the city cannot make accurate plans to reduce the impact of the highway project.

“There is no way in the world we will be able to pursue people seven miles outside the city to make them come here when they’re headed to Tuscaloosa,” said Collins.

Collins said he has also spoken with Jim and Joe Parr who will feel the impact of the road project  when less traffic is passing through Demopolis. They said that “they are successful because of local traffic and transient traffic.” Neither of them have a solution to the problem.

Collins said he is looking for any ideas and support from local businesses, industries, and residents.

“I don’t know what can be done, but I do know that I want to get the word out. We simply need to educate, to make people aware,” said Collins.