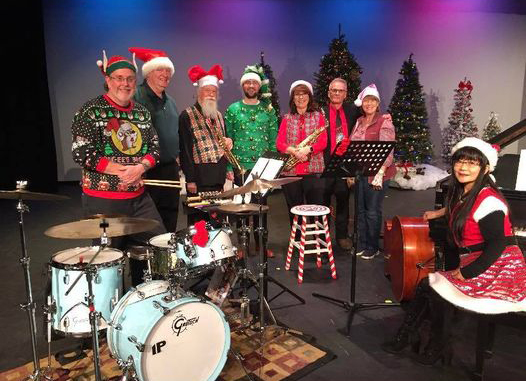 The Friends in Jazz group from the Birmingham area recently performed a concert in Demopolis as part of COTR.

The Two Rivers Arts Council recently hosted a Christmas Jazz Concert last Tuesday, November 30 as part of Christmas on the River. The concert was held at the high school auditorium, and according to TRAC member Lydia Randall, it was a big success.

“It was absolutely delightful. The “Friends in Jazz” was an awesome group that Kim Bain pulled together,” said Randall. “They were all so talented, and it was loose and enjoyable.”

Randall said the band received praise and positive feedback from the audience, and that it was a great kickoff to COTR.

Randall said that the TRAC invited Mem Webb to the concert as he was one of the originators of COTR, and Mayor Woody Collins, whose father was also an originator. Collins spoke on behalf of his father and shared what he remembered of the early days of COTR.

Randall said that the band took a tour of Demopolis before the concert and visited local businesses like the Mustard Seed and Canecutters. She said they were inspired by Demopolis’ charm and hospitality.

“They were inspired by all the old antebellum homes and the river, and by what we had going on around town. They were just amazed,” said Randall.

Randall said she thoroughly enjoyed the concert, and thought it was a great way to kick off the Christmas season.

“I think everyone enjoyed the concert. It lifted our spirits and got us thinking ‘here comes Christmas,” said Randall. “It was a great Christmas gift, and it was everything we had hoped for at the concert.”

Randall said the group plans to come back to Demopolis at some point and do another concert.

Up next for the TRAC is a Valentine’s Day dance on February 12. More information will be available at a later date.