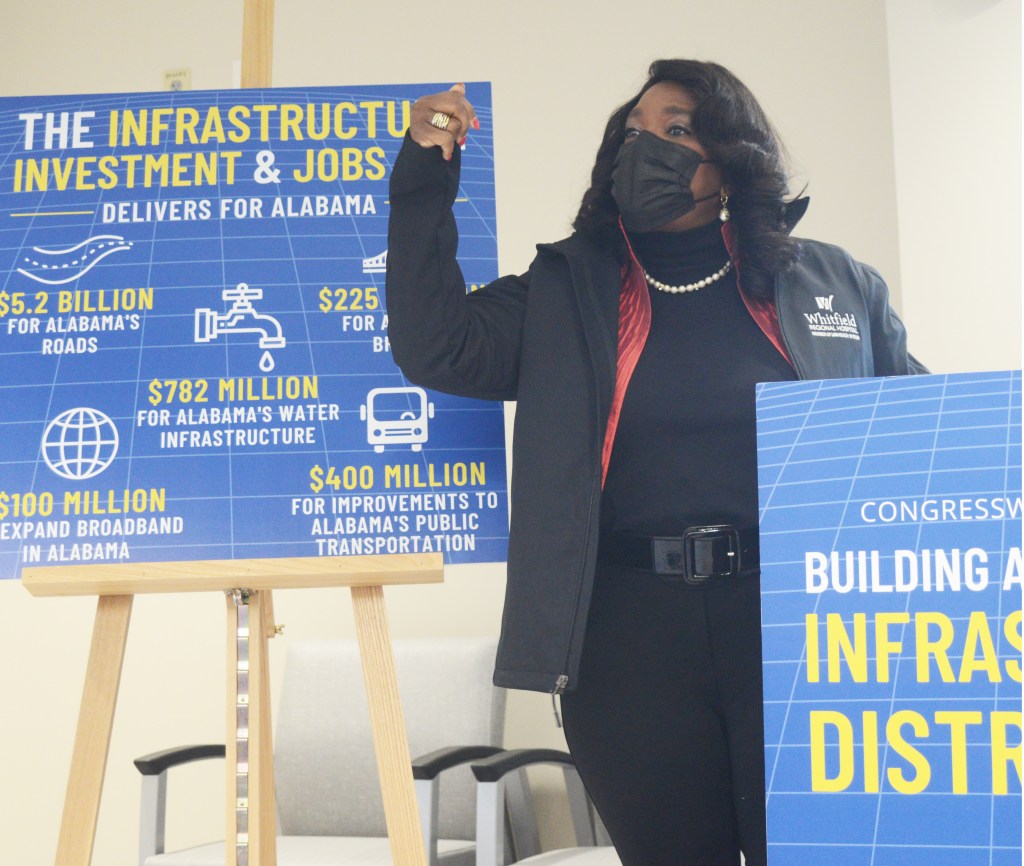 Congresswoman Terri Sewell spoke at Whitfield Regional Hospital on Tuesday, December. 21. She spoke on the new infrastructure bill that was signed into law on November 15 by President Joe Biden.

Congresswoman Terri Sewell continued her “Building a Better Alabama” Infrastructure District Tour with events with a stop in Demopolis on Tuesday, Dec. 21. Sewell gave a press conference at Whitfield Regional Hospital discussing the funding from the $1.2 trillion bipartisan Infrastructure Investment and Jobs Act that President Joe Biden signed on Nov. 15.

All states will receive money, and then that money is allocated to the Department of Transportation who then disperses it throughout the state. Alabama will get a total of over five years of $6 billion. The law will provide the following to Alabama: $5.2 billion for federal-aid highway apportioned programs, $225 million for bridge replacement and repairs over the next five years, $400 million for improvements to Alabama’s public transportation, $100 million to connect every Alabamian to high-speed internet, $782 million to improve Alabama’s water infrastructure.

Sewell began the press conference by thanking the hospital staff for their hard work during the height of the pandemic. She said that communities would not survive “were it not for the dedication, hard work, and sacrifice of healthcare professionals have made.”

When the pandemic first hit, WRH was granted $4.3 million dollars from the CARES Act, and she was pleased to see that the money has been well spent in renovating the hospital’s ICU and ED.

“Rural hospitals across the nation are under threat. I hope you know that your Congresswoman is working hard everyday to make sure we the resources and that those resources are distributed fairly,” said Sewell.

Sewell also said that when it comes to the delivery of affordable and quality healthcare services, partisanship needs to be put aside.

“When it comes to dealing with our deferred maintenance, this country has not had an infusion, an investment, for infrastructure for over a century. That’s amazing,” said Sewell. “This is a once in a generation opportunity for us to have transformational change through physical infrastructure.”

Sewell touched on the “in-fighting between members of different parties,” and she said differences have to be put aside because the decisions made are about the people that each party represents. The bill was “hard fought” and Sewell said that she would take all the infrastructure projects to ALDOT (Alabama Department of Transportation) to try and have them prioritized.

Sewell said that the money that has come to Alabama for broadband connection was a bill she sponsored in Congress. The broadband bill was specifically targeted for rural American. She also said that several of the projects she is currently working on involve sewer problems.

“To me it’s a basic human dignity to be able to know that sewerage is not going to affect your water and soil,” said Sewell. “There are parts of rural Alabama that has issues with that.”

Sewell believes that the infrastructure bill is a great, transformational thing for America.

“I want you to know that I am very pleased to see the partnership between city and county. To see the partnership between UAB and Whitfield, that’s what it’s about. It’s about leveraging our opportunities together for the people,” said Sewell. “It’s an honor every day for me to represent you all in the halls of Congress, and making sure that resources get to communities that need it.”