During the February 8 Marengo County Commission meeting, Probate Judge Laurie Hall made a special presentation to the family of Mary Anne Gracie who passed away on January 12, 2022. Hall prepared a resolution to acknowledge the work Gracie did for the county. Gracie served as a poll worker for elections in Marengo County for over 40 years. 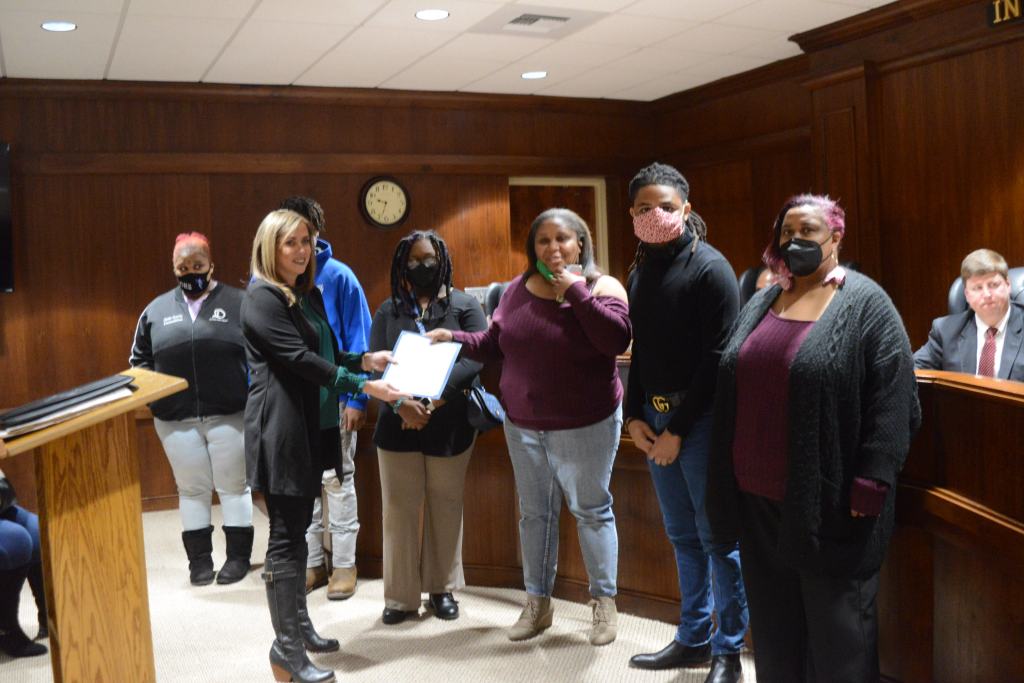 Probate Judge Laurie Hall presents the Gracie family with a resolution honoring Mary Anne Gracie who passed away on January 12.

Under Departmental reports, Engineer Billy Joe Webb reported on a bridge replacement project on County Road 38. He said they have the plans for construction ready, and he hopes to get the contract and advertising information, and bids prepared for the next Commission meeting. Webb also asked the Commission for permission to purchase a tractor and bush hog. The Commission unanimously approved the request.

Probate Judge Laurie Hall reminded the Commission about the special voting election in Demopolis to renew the 5-mil tax on March 22. Hall also spoke on the state election cycle for the year. She said the voting sites will have new ADA approved voting machines that are funded through the Secretary of State public funds.

Commission Chairman Terry Hinton ended the meeting by announcing that G.P. Austin Middle School is taking up donations to aid in storm relief and clean up in Sawyerville, AL in Hale County. Sawyerville saw extensive damage last week during a line of severe thunderstorms that produced an EF-2 tornado that killed one person and injured several others. The school is asking for any donations whether its money, food, or clothing.

The Marengo County Commission meets on the second Tuesday of each month at 9:00 a.m. at the Linden Courthouse.