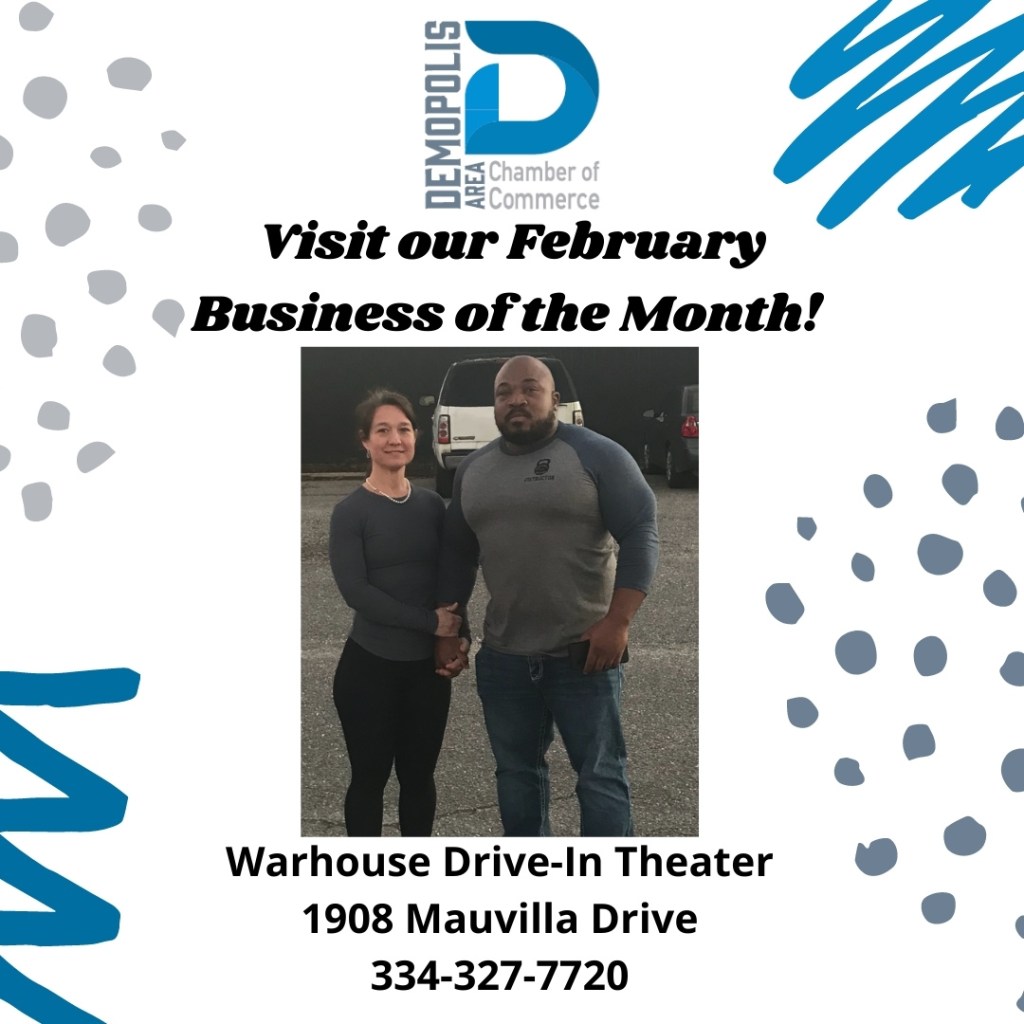 Warhouse Drive-In has been named the February Business of the Month by the Demopolis Area Chamber of Commerce. It is located at 1908 Mauvilla Dr.

Warhouse Drive-In has been in business for about a year and has quickly become a staple in the Demopolis Community. It’s a popular place for families to see a movie together and enjoy quality time that might have been taken up by other things.

Owner Richard “Tank” Bryant said the inspiration for opening the drive-in started at home with movie nights with their children. On Wednesday nights, they would set up a projector in their yard and watch a movie that one of their children had picked. He and his wife set up concessions in the yard to simulate a real theater, and they did that for several years.

After several years of having their gym on the property, Bryant sand his wife purchased the property and decided to do a “family movie night with the whole city.”

“We didn’t know it would grow into what it’s become. Initially, we were going to project a movie on the screen inside the gym, not open a drive-in,” said Bryant. “But that changed after we got married and went to Blue Ridge, GA and saw this old 1930s or 1940s drive-in movie theater. That’s when we had the epiphany of bringing that back to Demopolis.”

The drive-in has a full concession station with hamburgers, hotdogs, corn dogs, nachos, funnel cakes, popcorn, deep fried Oreos, and several other items. Bryant said they also do specialty items depending on the time of year. For Valentines weekend, a new film titled Marry Me featuring Jennifer Lopez will play, and the specialty item is chocolate covered strawberries. There will be sugar free and traditional options.

An upcoming to the Warhouse is Ventriloquist/Comedian Marc Rubben who will appear on Monday, February 21. He has done several comedy shows and will be at the Warhouse gym at 5:30 p.m. Bryant said they are in the process putting together a one-ring circus inside, along with several ideas that have not been made public.

Bryant said that he is proud of being recognized by the Chamber of Commerce, and said it is because of their employees.

“We could not have done this on our own. Our employees are hardworking and they are able to go with the flow of what I need them to do,” said Bryant. “Because of how far the theater has come since its inception, I’m very proud that we have been able to bring family entertainment to the city, and that the city has responded to the point that we became the business of the month.”

Bryant also expressed his appreciation for the support he has received from the public. He said they aim to continue bringing good family friendly entertainment.