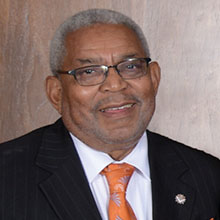 All of Marengo County is remembering County Commissioner Freddie Armstead, 76, who passed away last Wednesday, February 9 from an accidental gunshot wound. Since his death, there has been an overwhelming amount of praise, appreciation, and support for the long-time Commissioner and his family.

Armstead had a tremendous impact on Marengo County from serving on the County Commission to helping and guiding Whitfield Regional Hospital to be one of the best hospitals in the nation. WRH CEO/Administrator Doug Brewer said that he only knew Armstead for a short time, but in that time he (Armstead) became a mentor, advisor, confidant, counselor, and most importantly, a beloved friend.

“For our hospital, Freddie was a tireless advocate and is in large part responsible for our doors being open today. It is not an overstatement to say that had Freddie not fought for this hospital when many others had given up on it. We would have lost many more of our friends, family, and neighbors to COVID than we already have,” said Brewer. “He knew the importance of this hospital to our community and our region, and the work he did to help us will translate into hundreds of saved lives in the years to come.”

Brewer said that Freddie’s service to his community went deeper than him being a politician because he cared about the people. He said that every decision Armstead made was based on what was good for the people and the area.

Brewer said what stood out the most about Armstead was his love for the region. That love is what drove him every day was making life better for the people in this area.

“I think that’s why he got out of bed in the morning, and why he worked until he went to bed at night,” Brewer. “He improved the opportunities here for people and the quality of life for people. I learned early on that he was well-known and respected in the county.”

Brewer said he wants people to remember Armstead’s heart and how much he cared about his home and fellow citizens.

“As a member of the community, I watched Freddie have the same impact on dozens of important public issues across our county. I personally will forever be thankful that I was able to get to know and be inspired by Freddie over the past four years, said Brewer.

Demopolis Mayor Woody Collins echoed Brewer about Armstead and how important he was to Marengo County, even if they didn’t always agree on things.

Armstead’s influence spread across the county, and Collins said that if it weren’t for him, Demopolis would not have drawn in Two Rivers Lumber.

“Freddie and Jason Windham went to bat for some road work that needed to be done at the time. The two of them stepped up and that’s one of the major reasons that Two River’s Lumber is here today,” said Collins.

Armstead was also instrumental with the current City Landing project. He came to the table to help Collins in securing funding for the project after the price of construction rose to $2.9 million. Collins said that the City Landing project would not be a thing without Armstead.

“Whether you agreed or disagreed with Freddie’s viewpoints, when it came down to doing the best for this town, he did it,” said Collins. “I can’t imagine dealing with the County without Freddie. He’s always been a constant, and this place will not be the same without him.”

Collins said that he wants people to remember Armstead’s dedication to the county and the community.

“His work and the projects he started will continue for many generations. I just hope that the coming generations realize why some of these things have come about. They came about because of Freddie’s efforts,” said Collins. “His influence on the county and the city will be felt long after our years.”

Commissioner Armstead has been a County Commissioner and a community leader for many years. He served District One for 36 years, and was running for re-election in the May primary.

The Celebration of Life for Freddie Armstead will be held on Saturday, February 19, 2022 at 2:30 pm at Memorial Gardens Cemetery in Demopolis, Alabama. On Friday, February 18, he will lie-in-state at the Marengo County Court House from 2:00 pm until 4:00 pm.