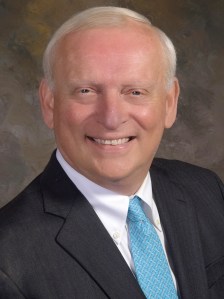 Demopolis Mayor Woody Collins was the speaker for the February 9 Rotary Club meeting. He provided attendees with an update on how Demopolis is doing and everything he has learned since he took office.

Collins’ first comment to Rotarians was “The last year and a half has been the busiest of my life.” He said that one thing everyone talked about when he was running for office was whether or not being mayor was a full-time or part-time job.

For future mayoral candidate, Collins put emphasis on thinking hard about the decision to run for mayor. He said “if you are not available, it is a real problem.”

On the topic of city finances, Collins said that the finances are great, but they also scare him. He said there are many fictitious financials because of the government. Demopolis’ tax revenues were up last year, and they are up this year as well. But, he said every time there is a government giveaway program the tax revenue goes up.

Collins said it has been one of his goals since he took office to have a stable $6 million in the city’s reserves in case of an emergency.

Collins then touched on the various projects going on around Demopolis. He spoke about the street paving projects that were started under the previous administration that are nearly complete. He said there have been instances where more money than initially estimated was needed to keep the projects moving along. But, Collins said they are getting through it, and the paving projects will soon be completed.

Collins touched on the City Landing project next. He said this project is one that he “would take to a national level and talk to people about.” There are seven government agencies that are participating in the project.

“Let that sink in for a minute. You can’t get two government agencies to talk to each other and work together,” said Collins.

When the project first began, it was estimated that it would cost $1.2 million and that the city would be responsible for providing $200,000. After the project was bid, there were soft spots found in the parking lot. After a number of opportunities and issues came up, the price of the project is now $2.9 million.

Other updates from around Demopolis were the new pellet mill, traffic control, and new businesses. The Drax pellet mill is close to opening, and is expected to bring in around 80 new high-paying jobs to the area. The city and ALDOT (Alabama Department of Transportation) are currently working together to find a solution for the “suicide lane” on Hwy. 80. He asked that everyone bear with the City while they look for a permanent solution.

Not long after he took office, there was talk about a new Taco Bell coming to Demopolis. According to Collins, it almost didn’t happen because of water line issue. Collins said that he received a call from the construction team of Taco Bell telling him they were going to pull out of building a restaurant in Demopolis. Collins said it took him only 20 minutes and a few phone calls to resolve the issue.

Collins ended his presentation by giving credit to his department heads and the members of the City Council.

“I couldn’t ask for better. If we don’t put good people in place and allow them to do their jobs nothing’s going to be done,” said Collins.