The Marengo County Sports Hall of Fame inducted its 2022 class during the annual banquet held on Monday, February 14.

Four new members were inducted into the hall of fame: Jim Crawford, Doug Goodwin, Damon Hodge, and Will Moore Jr. Jim Crawford was posthumously inducted and his award was received by his daughter Kelley Slappey. Doug Goodwin’s award was presented to him by sons Dustin and Devin Goodwin, Damon Hodge’s award was presented to him by his sister-in-law Angel Adams, and Will Moore Jr. received his award from his grandson, Caleb Sears.

Demopolis Mayor Woody Collins opened the banquet with praises for the new inductees and past inductees for their contributions to sports in Marengo County.

“Every single year the classes get better. The inductees get better, and I have been amazed at the number of athletes that have come and gone through here,” said Collins. “Marengo County has a lot to be proud of, we really do.”

Seven awards, including the inductee awards, were presented during the banquet. The first award of the night was a Special Award presented to Sweet Water High School’s Coach Pat Thompson. Thompson led his 2021 Bulldogs to an undefeated (14-0) season and to the 1A State Championship on December 2, 2021. The victory capped off an incredible season for the Bulldogs who have now won seven state titles since 2006 and 11 in school history. Pat Thompson accepted the award from Kenny Freeman. 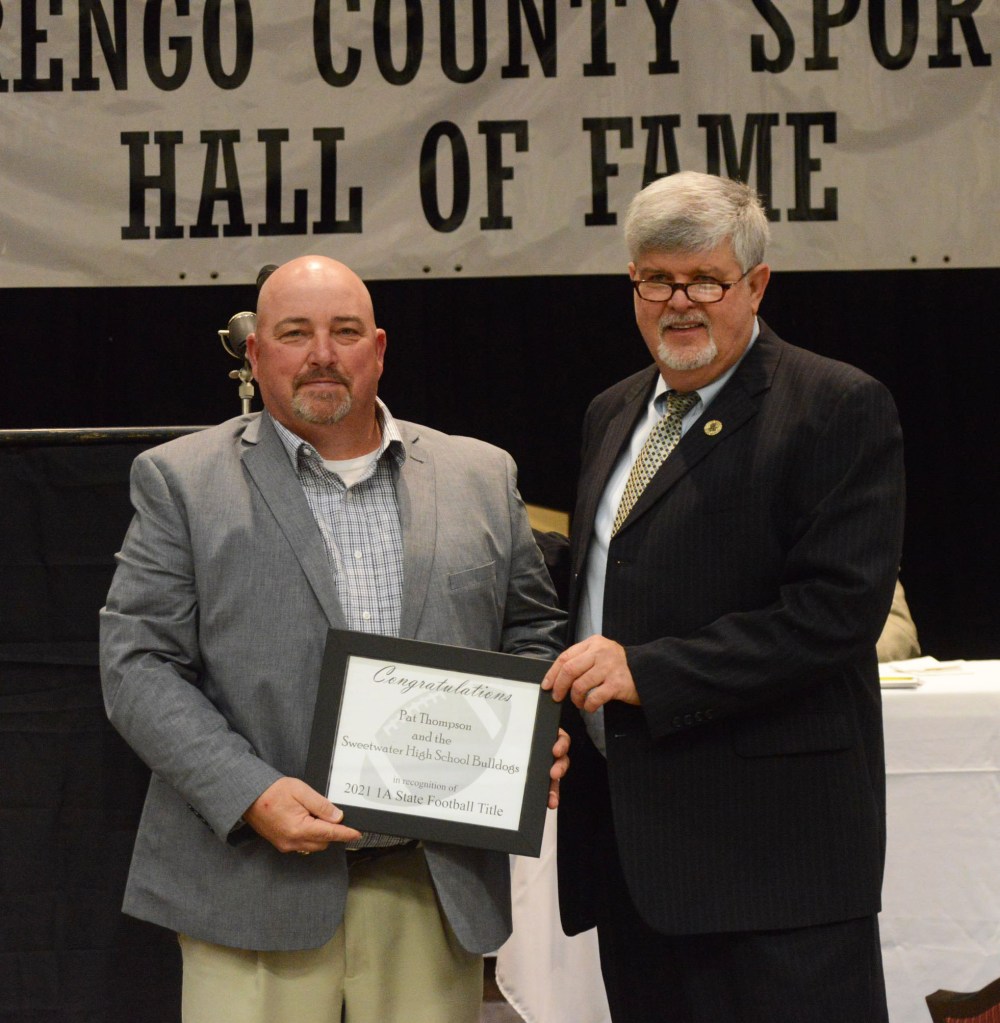 Sweet Water High School football coach Pat Thompson was recognized for leading his team to an undefeated season and winning the 1A State Championship. Presenting Thompson with his award is Kenny Freeman. Photo by Andrea Burroughs

Burns has exhibited great character and leadership as an athlete that has led to her receiving the scholarship. Burns has been a member of the basketball, volleyball, cheer, and track and field teams since the seventh grade. In track, she placed first in the state as a member of the 4 x 100 intermediate relay team, she has won MVP awards in the 1A girls’ basketball area and regional tournaments. She was also elected to play in the North-South All-Star basketball game in July of 2020. 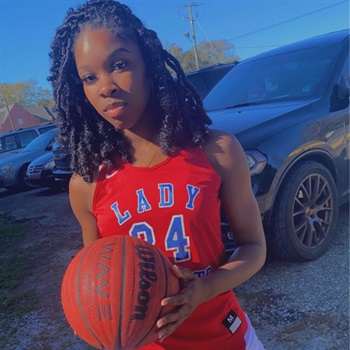 While playing sports and working on weekends at Jack’s in Linden, Burns has maintained a 3.5 GPA and scored a 20 on her ACT. In the fall, she plans to attend Alabama A&M, Alabama State, Wallace Community College, or the University of Alabama to pursue nursing.

Burns was not present to receive her award, and it was presented and accepted by Rodney Rowser.

Marengo County Superintendent Luke Hallmark presented the Team of the Year award to the 1981 Marengo Academy State Championship Softball Team. Hallmark took a few moments to speak about the 1981 team and their successes that year. 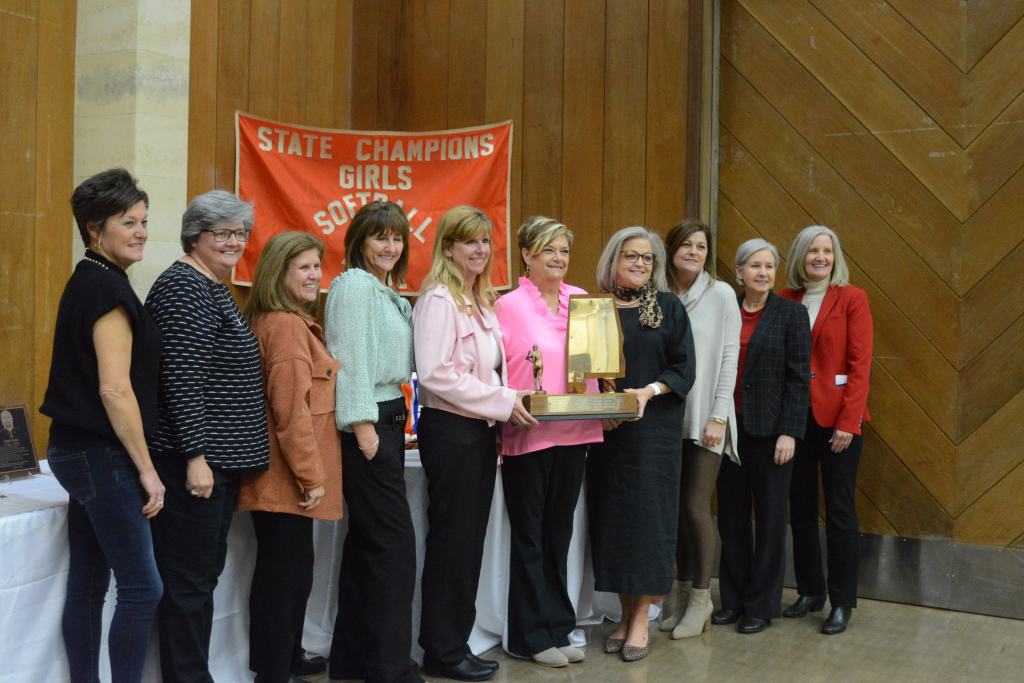 The 1981 Marengo Academy softball team was recognized at the Marengo County Sports Hall of Fame banquet on Monday, February 14. The 1981 team was presented with the Team of the Year award by Marengo County Superintendent Luke Hallmark. Photo by Andrea Burroughs

“Just looking at the records Coach Crawford had blows my mind. Just looking at how many games they won in a row, and how many championships they won, and how he could take basketball and softball and win,” said Hallmark. “It just goes to show you that he was definitely a coach.”

The presenters of the Team of the Year trophy were Diana Miskow and Sharon Wright. The 1981 team accomplished a lot and posted highly impressive stats. The team had 27 wins and no losses, extended their winning streak to 44 wins, and won the state championship for the second year in a row. They beat their opponents by an average of 10 runs per game.

The following year, the 1982 team continued the streak to 66 games and won their third state championship in a row. The winning streak lasted from March 1980 until May of 1983. Until 1990, Crawford’s teams won 8 more times and finished 2nd or 3rd multiple times. Crawford’s career record was 263 wins, 35 losses, 3 state championships, and an 88 percent winning percentage over 12 seasons.

The first inductee to be recognized was Coach Jim Crawford. Lori Edwards and Crawford’s daughter Kelley Slappey presented the award. Slappey also accepted the award for her father.

Edwards said that many people would know the name Jim Crawford to be synonymous with the girl’s athletic program at Marengo Academy, or as the voice of the Longhorns.

Slappey spoke fondly of her father as a coach and a parent. When Slappey spoke on her father, she focused on three things that made his coaching unique: fun, friends, and finding joy in everyday things. 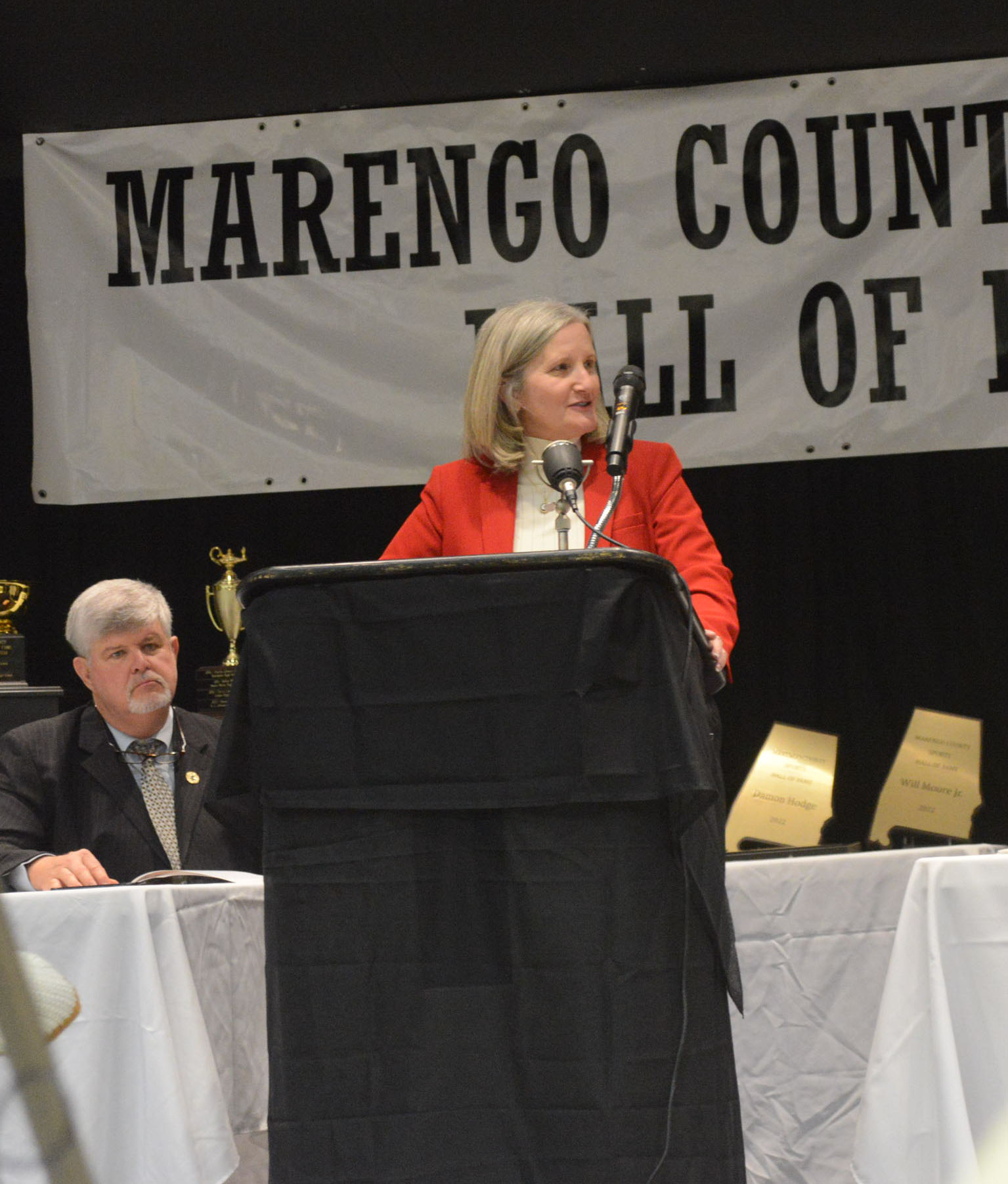 Kelley Slappey is the daughter of Jim Crawford who coached girls’ sports at Marengo Academy from the 1970s to the 1990s. Slappey spoke for and accepted the award for her late father. Photo by Andrea Burroughs

“My heart is full just thinking about all the good times we had with Dad, and what he did for Karen and me. I don’t think I’ve ever met anyone who had as much fun as dad on a regular basis. He could find fun in most anything.”

Miskow commented on how Crawford’s coaching helped them during their school years, and how it developed them into the adults they are today.

“Coach Crawford took our natural ability and developed us into champions. He inspired us to see an athlete as much more than the physical aspect alone,” said Miskow. “He built our character, he taught us discipline, team work, leadership skills, time management, sacrifice, and risk taking. He prepared us for life.”

Doug Goodwin was the next inductee, and his award was presented to him by his sons Dustin and Devin. Goodwin played football for four years at Sylacauga High School where he played defensive back, running back and linebacker. He was also a pitcher and catcher on the baseball team and played in the East-West All-Star Game.

Doug attended Auburn University as an invited walk-on at defensive back under head coaches Doug Barfield and Pat Dye and graduated in 1984. He began his professional coaching and teaching career in 1985, at Lanett High School as an assistant varsity football coach. He was also in charge of the weight program and coached the 9th grade basketball team. 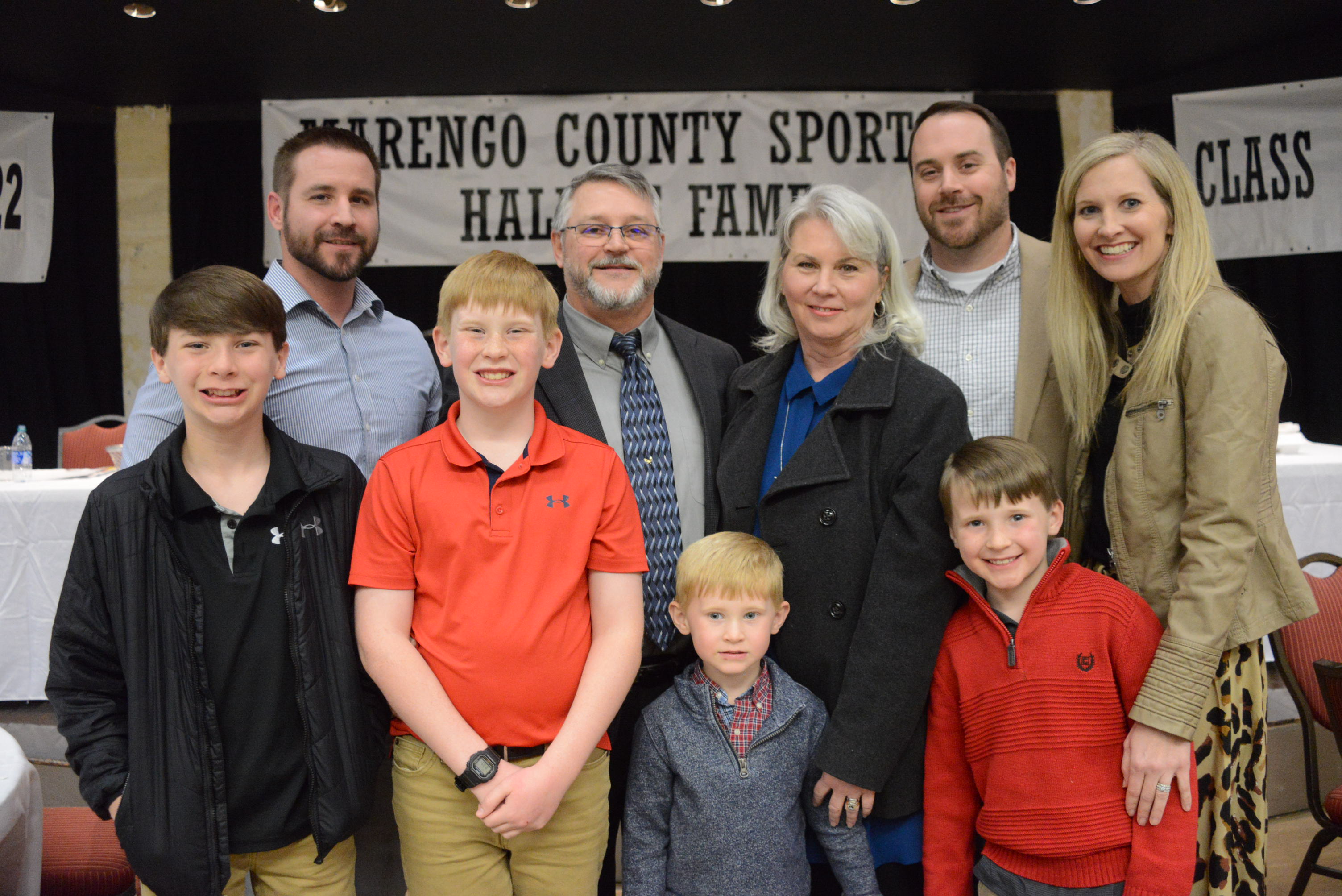 Doug Goodwin was inducted into the Marengo County Sports Hall of Fame alongside three other inductees on Monday, February 14. Pictured is Goodwin (center) with his family. Photo by Andrea Burroughs

Upon accepting his award, Goodwin emphasized that accomplishments in life are not made alone, but with the help of family and a strong support system.

“There’s a lot of people to thank. We had some great players while we were here, and a lot of them still stay in contact with us. And that’s what’s most important to me,” said Goodwin. “We had great administrators, and in high school, administration is key. They can make you, or break you.”

Goodwin said that when he got the call about coming to Demopolis, he initially turned it down. But after some persistence, he and his family came to Demopolis to see what it had to offer.

“God made it very clear that this is where we were supposed to be at that time. It was a great 8 years, and Demopolis is very important to us,” said Goodwin. “It’s the best place I’ve ever coached.”

Damon Hodge received his inductee award from his sister-in-law Angel Adams. Hodge earned a scholarship to play football for Alabama State University (ASU) where he played from 1995-1999 and started his sophomore year. He earned First Team All-South Western Athletic Conference (SWAC) in 1997 and 1998. As a junior, he set the school record of Most Receptions in a Year with 83 for 1,023 yard and 9 touchdowns, becoming the school’s all- time leading receiver. He earned First Team Black College All-American in 1998. He is listed in the ASU record book in second place for Career Receiving with 2,280 yards and sixth in Career Points with 134 as he had 21 receiving touchdowns and 4 two-point conversions. 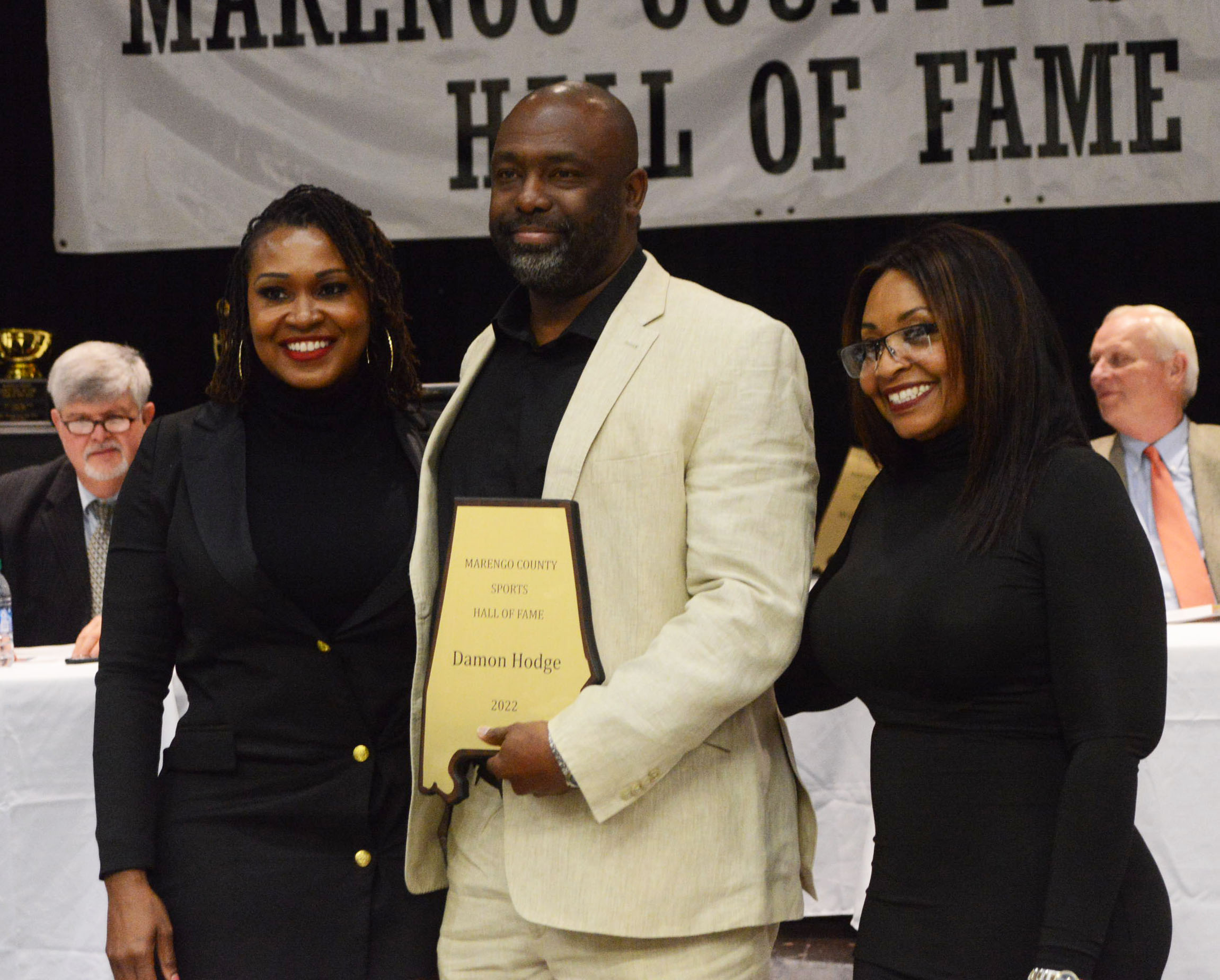 Damon Hodge was one of four members inducted into the Marengo County Sports Hall of Fame on Monday, February 14. Photo by Andrea Burroughs

“Playing one year of high school football was the catalyst that took this country town boy from baling hay, to experiencing huge dreams and learning so much culture,” said Adams.

After accepting his award, Hodge said that two things came to mind for him: sacrifice and appreciation. He highlighted his mother as one if his major sources of support throughout his career.

“When you’re young you don’t really appreciate the sacrifices your parents make. And it was my mom’s strength that actually gives me strength today,” said Hodge.

The last inductee was Will Moore Jr., and his award was presented to him by his grandson Caleb Sears. Sears spoke fondly of his grandfather, and said that he has only just realized how impressive an athlete his grandfather was for Demopolis.

“Growing up, he always told me how good he was whenever we came to Demopolis. He would tell us stories about his playing days, but I didn’t understand how truly good he was being inducted into the hall of fame,” said Sears. 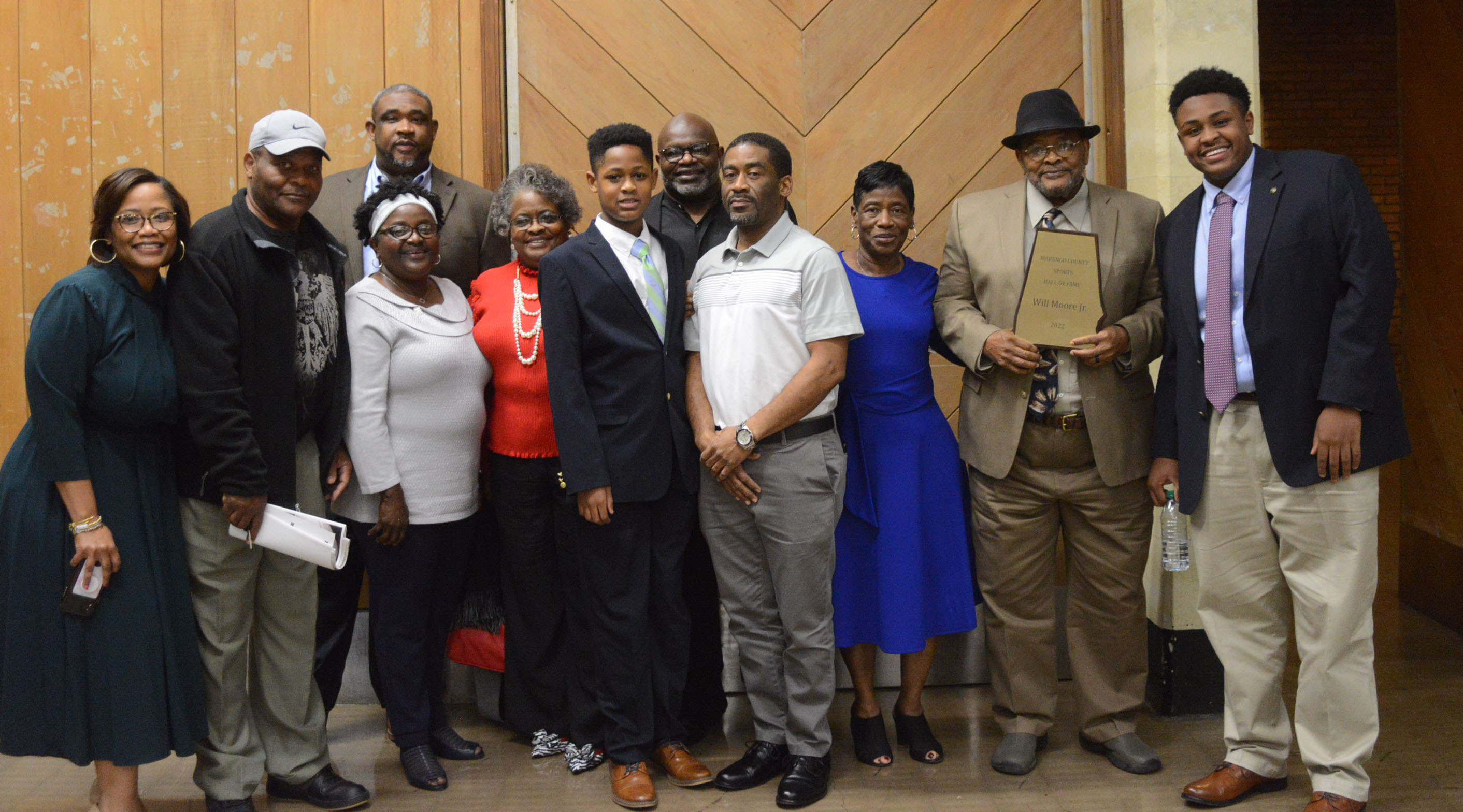 Will Moore Jr. (second from right) was inducted into the Marengo County Sports Hall of Fame on Monday, February 14. His grandson, Caleb sears (far right) presented him with his award. Photo by Andrea Burroughs

When Moore accepted his award, the first person he thanked was his late mother Patsy. His mother was one of his biggest supporters throughout his years of playing sports. His parents taught him determination to go after what he wanted in life, and those lessons have made him the person he is today.