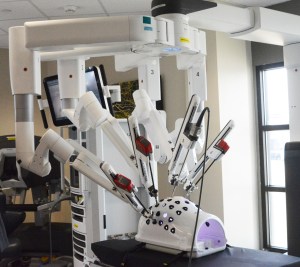 The Da Vinci XI robotic surgery system will be in place at Whitfield in April with the first surgery scheduled for the second week in April. Photo by Andrea Burroughs

Whitfield Regional Hospital held a demonstration of the Da Vinci XI robotic system last Wednesday February 16. Dr. Quince Gibson, who will be the primary user of the Da Vinci, gave a presentation on the surgery system and how it will improve surgeries done at WRH.

The Da Vinci surgical system gives surgeons an advanced set of instruments to use in performing robotic-assisted minimally invasive surgery. Though despite the term “robotic,” robots do not perform the surgeries. A surgeon performs surgery with the Da Vinci by using instruments that he or she guides via a console.

The Da Vinci has three parts; a surgeon console where the surgeon controls the instruments while viewing a person’s anatomy in high-definition 3D, a patient cart that is positioned alongside the bed and holds the camera and tools the surgeon uses, and vision cart that makes communication between components possible and supports the 3D vision system.

Gibson highlighted that the Da Vinci extends the life of a surgeon in that it reduces strain on a surgeons’ body.

“Long surgeries can cause strain for surgeons that often lead to neck and back pain. Lots of surgeons end up retiring because of neck and back pain. So this machine is a big deal for surgeons,” said Gibson. “Surgeons are able to sit down at the console and perform some of the more difficult procedures in a more controlled and comfortable setting.”

Gibson said surgeons will dock the robot, which means a doctor will make small incisions in a person’s abdomen to place the robotic instruments used for surgery. Then the surgeon will then perform a robotic assisted surgery from the console. Once the surgery is complete, the surgeon will undock the robot and remove the instruments. Gibson said patients will have a minimally invasive surgery done with the help of the robotic system.

The Da Vinci has several features and capabilities that make surgeries easier, one of which is precise movement. The robot takes away the natural tremors in a surgeon’s hands and arms to allow for a near perfect surgical procedure. The robot has “wristed instruments” that move more freely and allows a surgeon to perform advanced maneuvers that may not be possible with straight instrument that needs more manual effort from the surgeon.

The robot also has 3D visualization that helps surgeons judge distance and perception much better than in traditional surgery.

“The 3D visualization makes it much easier for surgeons to estimate what tissue they are looking at, and helps them become better surgeons,” said Gibson. 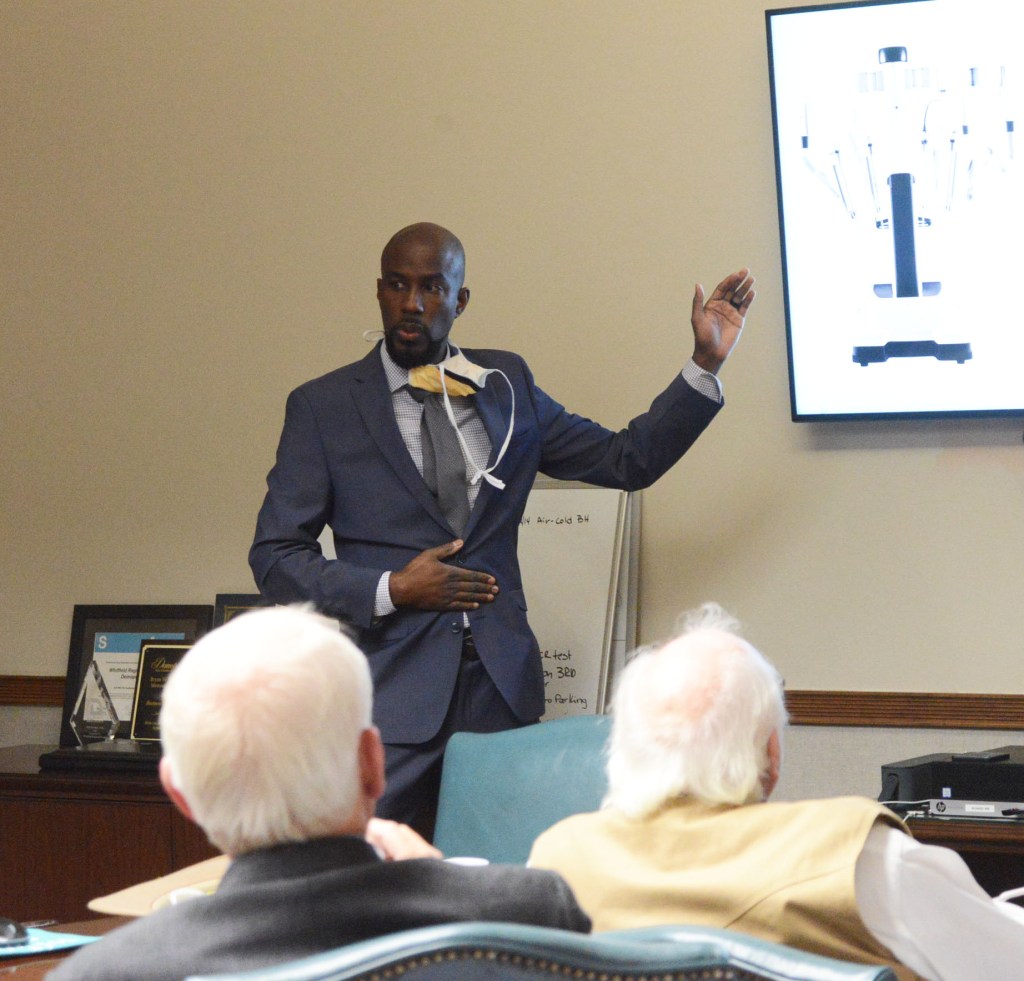 Some of the surgeries that can be done with the Da Vinci include laparoscopic cholecystectomy, colon surgeries, bariatric surgeries, cardiac surgeries, general surgery, and thoracic (chest) surgery.

“Once we have the Da Vinci we will be able to give our patients better care, and less down time after a surgery,” said Gibson. “If we make smaller incisions and do better surgery, our patients will be back on their feet in a short amount of time. They’ll be back at school or work faster and helping us live life here in rural Alabama.”

“It’s an exciting time for us. From a community standpoint, we’re blessed to have some of the best surgeons in the world in the form of Dr. Gibson, Dr. Daniel Chu, and Dr. Kennedy,” said Whitfield CEO/Administrator Doug Brewer. “Quite frankly, it has been unbelievable to me the number of calls I’ve gotten from physicians outside of our market who want to come into our community be able to utilize this tool. So I think we will see an immediate impact from having this new system.”

Brewer said that for the community in the long term effects the Da Vinci will have on residents.

“I think that in ten years it will be almost impossible to recruit a young surgeon without having a Da Vinci system. It’s almost impossible now,” said Brewer. “One of the first things they’re going to ask you is if you have a Da Vinci. And if you don’t, you’ve lost a potential doctor who could have improved your hospital. I think this is one of those things that will have a 50 year impact on the community.”

Brewer said the first surgery done with the Da Vinci should be around the second week of April.