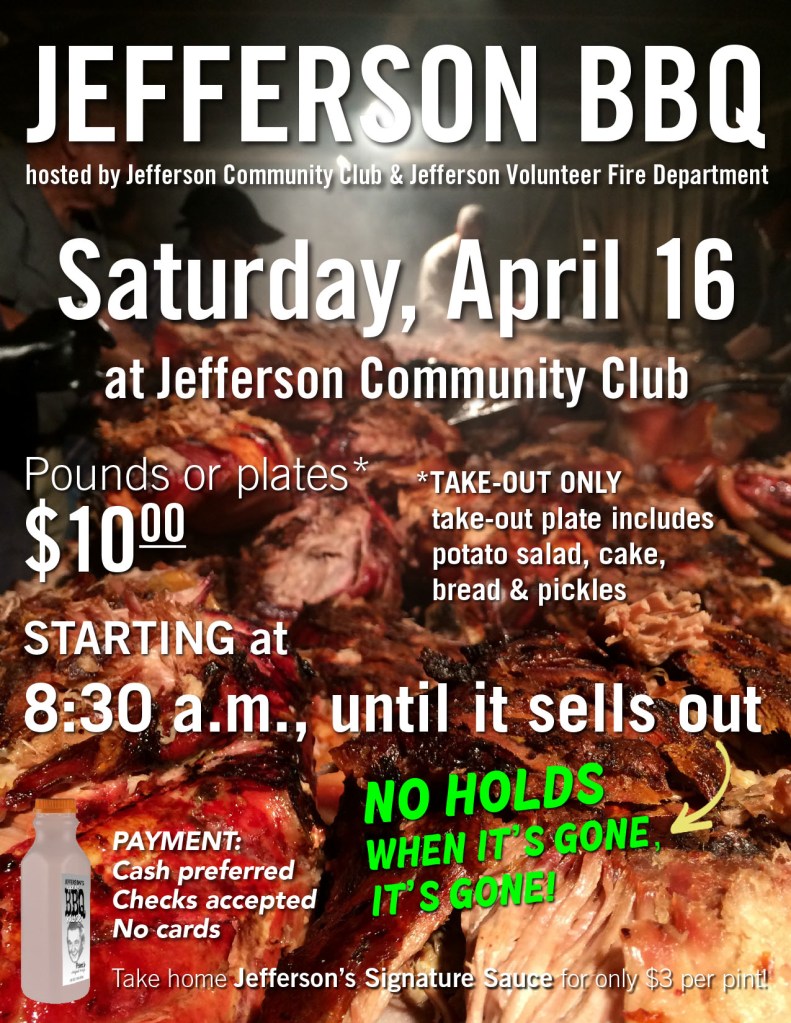 The cost is $10 per pound or per takeout plate. The plate includes barbecue, homemade potato salad and cake, bread, and pickles. Pints of Jefferson’s signature sauce will be available for $3. Cash is preferred, and checks are accepted, but no debit or credit cards are accepted.

The event has been a sell-out for several years. Both options will be available for purchase beginning at 8:30 a.m., continuing until the barbecue has sold out. There are no pre-sales and no holds.

Jefferson Barbecue is a longstanding gathering tradition in Marengo County, but travelers come from across the county, even state lines, for a taste of the unique recipe. In fact, the event has seen sell-out crowds more times than not in recent years. This past October, all barbecue was sold before noon.

“Barbecue has sold out in record time for the last few years,” said George Norris, Jefferson’s Fire Chief. “We cook all that our pit will hold, and it takes a solid day and night to cook, so when it’s gone, it’s gone.”

They pack the pork shoulders on their onsite pit until every inch is covered, and the meat smokes for 24 hours over hickory coals. Members of the community spend at least a few days prior baking, cooking, and prepping.

“It’s great for any organization to have a fundraiser that sells out because that means you have support and that people enjoy what you have to offer,” said Pam Locke Baker. “On the other hand, it’s tough to see friends drive up when the last pound has been sold and have to tell them that we’ve sold out. That’s why we can’t promise that we will continue serving into the afternoon, it may not last that long.”

“Our community is blessed to have the level of volunteerism that we have and also the support that we get from so many others for a successful fundraiser,” said Betsy Compton Luker, a member of the volunteer fire department. “It’s about good food, for sure, but also, having such support for this event makes a lot of difference for our department and has a huge positive impact on our community, while also preserving one of our county’s greatest traditions.”

Proceeds from the barbecue benefit both the community club and the fire department, and it’s the only fundraiser for each organization, aiding the VFD in maintenance and upgrades to their equipment and facility, which is located next door to Jefferson Community Club. The fleet includes four trucks used to service the community–a service truck, brush truck, an engine, and two tankers, all of which are aging and require timely repairs and maintenance.

“Our barbecue has been a big help to us over the years,” Norris said. “Proceeds from this event help us do some of the things that we might not be able to do with only restricted funds that are allocated to us. It takes a lot of money and time to maintain a fire department, partly because of all that’s required for us to not only pass inspection but to strive for a rating that helps ensure that our neighbors can see the positive results of fire protection when it comes time to pay their property insurance premiums.”

JVFD’s coverage area includes not only the immediate five-mile stretch adjacent to the station, but also mileage of U.S. Highway 80 west as far as Plaza Golf Carts in Demopolis, County Roads 21 and 57, Rangeline Road, and dozens of dirt roads throughout the community. The department is manned entirely by volunteers.

“Everything we do is a commitment of time from our volunteers, a true commitment,” Norris said. “Our volunteers don’t just show up when we’re paged, fight a fire, then go home. We have dedicated individuals who train several hours each month, keep our facility and trucks clean, perform maintenance, keep the grass and brush clear around nearly 70 hydrants along the roadsides and keep those painted and serviced, and all of the other logistics that have to be in line for us to operate safely.”

Combining all of these efforts, Jefferson VFD volunteers commit nearly 2,000 man hours each year. That’s likely a modest estimate. But their work is necessary.

“Our department was established in 1986 after several properties in our community were lost to fire,” Norris said. “We’re not going to prevent every fire from happening, but we can help provide a sense of security and an awareness for safety when incidents occur. We hope that every little thing we do helps keep our community just a little safer.”

Jefferson has a small population, but the broad area is literally a map of some of the county’s best pasture and timber land. A high percentage of JVFD’s calls are for brush fires, so controlling the fire safely before allowing it to overcome a property or reach a structure is usually the top priority.

“Fire protection, especially for volunteer fire departments, seems like it used to be a matter of putting water on a flame, but so many factors have changed it over the years,” Norris said. “Making way for every safety measure, more money has to be spent on safety equipment, more hours need to be dedicated to training than ever before, and we have to keep all of these things in mind while we do the things that before may have seemed like such basic steps. We’re fortunate to have people who are committed to giving what it takes.”

Jefferson Community Club is located on Highway 28 in the Jefferson community. The physical address is 26098 Alabama Highway 28, Demopolis.