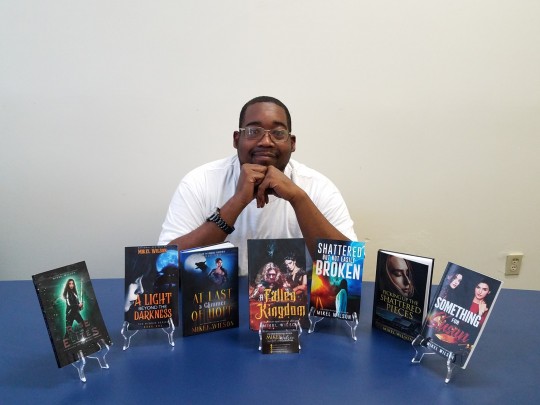 Sweet Water resident Mikel Wilson is quickly becoming a well-known author across Alabama and the U.S. He is the author of several fantasy, sci-fi, murder mystery, and Christian books, some of which have made the Top 100 on Amazon.

Sweet Water resident and author Mikel Wilson has become a staple in the writing community and has published several adult and young adult books. He has been continuing his hard work and will have more books published within the next few months.

New releases for Wilson include A Fallen Kingdom. A Fallen Kingdom is a young adult sci-fi book based on the time of knights, similar to the Knights of the Round Table. Wilson said the story focuses on a young Viking knight who feels trapped between serving his kingdom and following his own path through life. A second release is the second book in a series called The Hybrid that has a heavy focus on fantasy elements.

“The Hybrid has Amazons, Greek mythology, dragons, and several other supernatural beings. Basically, if you like anything fantasy, it has it in there,” said Wilson. “My entire imagination ran free, and I loved it.”

Wilson said The Hybrid series is set to be a five book series with book 2 scheduled for a July 2022 release, and book three is expected to release in November or December of 2022. Books four and five will be released sometime in 2023.

For those who follow Wilson’s Christian books, book three of the Shattered But Not Easily Broken series will be released in 2023.

“We’ve already set the date and the book is currently being written. My editors are working hard on it, and I think it’s going to be a fantastic finale to the series,” said Wilson.

Upcoming events for Wilson include attending the The Capital City Author Event in Montgomery, AL on May 21, 2022. Wilson said he is excited for the event as it will allow him to put his name out there, and meet new authors.

“There will be over 80 authors there, including some nationwide authors. Attending this event will open more avenues for me and allow me to connect with other authors as well as readers that are enjoying my books,” said Wilson.

Wilson said he also has radio interviews coming up in Oklahoma and Texas, as well as an interview with Andy Renner.