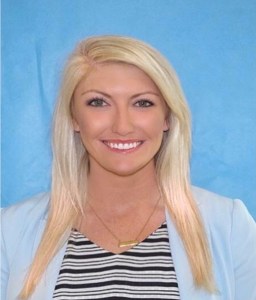 Brandi Smith was named the new DMS principal on April 29.

Brandi McGee Smith was named the new principal for Demopolis Middle School during a called meeting of the Demopolis City Schools Board of Education on Friday, April 29. Smith will take over as principal on July 1.

Smith has been in education for ten years. She began her career as a science teacher at Hillcrest Middle School in Tuscaloosa, Alabama. After six years of teaching, she joined Hayden High School in Hayden, Alabama as the assistant principal. Smith and her husband, Zach, have a one-month-old daughter named Avery.

Smith said the main thing that drew her back to Demopolis was her family and the opportunity to invest in the community.

Smith said she is excited to see what DMS has in store for her in her first school year.

“I’m not going in to really correct anything. I feel like Demopolis Middle School is a great school. We’re just going to observe my first year and see where I can be a positive asset and hopefully a positive addition to the school,” said Smith.

Smith said what she is looking forward to the most in her new position is the student body.

“It’s all about the students. I have missed those middle school interactions, and I aim to empower each student to become a productive citizen and a lifelong learner,” said Smith. “I feel like middle school is such a fragile but crucial time in our students’ lives. And being a part of that important piece of their educational journey is so important to me.”

Smith said she is excited to be back in Demopolis and looks forward to the fall school year.

“I’m excited about the opportunity. I aim to make the Superintendent, the Board, and the community proud of me,” said Smith.