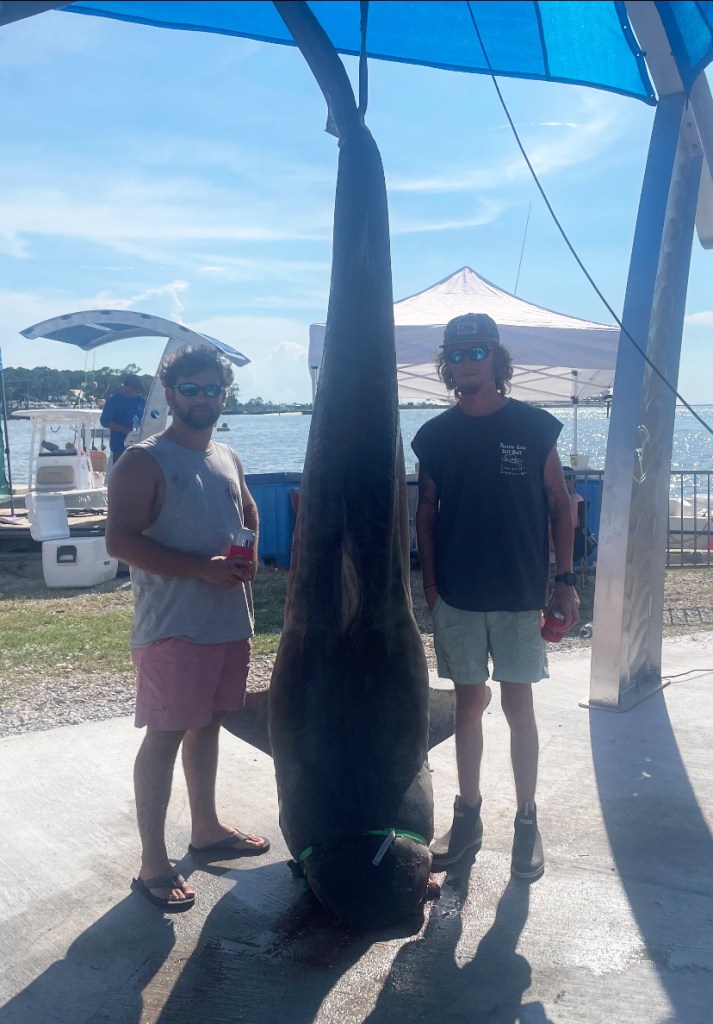 A former Sweet Water native made news headlines recently after he and a friend reeled in a 600 pound and 13-foot Tiger Shark during the Deep Sea Fishing Rodeo on Dauphin Island. Several sharks were caught during the event as this was the first year anglers were permitted to fish for sharks.

Chase Grochowsi and Hayden Pugh, both currently living in Thomasville, caught the massive 13-foot shark on the first day of the rodeo and held the first place spot for the first day and most of the second day.

The shark wasn’t caught by accident as Grochowsi said that he and several others taking part in the rodeo knew the shark was in the area. He said they only waited around 15 minutes before the line started taking off.

“After the line started taking off, I pulled out my full body harness and strapped my partner in. He tightened up the drag, set the hook on the fish, and it took off,” said Grochowsi.

He said it took them about three-and-a-half hours to get the shark up to the boat, but the biggest job of all was getting it into the boat.

“We had to tie ropes around it and use hook pulleys attached to the boat. It ended up taking us about an hour and a half to two hours just to get the shark into the boat,” said Grochowsi. “We had to flag somebody down and get him to help because it was impossible with just two people.”

Grochowsi said when they finally pulled the shark to the surface, he almost dropped him out of disbelief.

“It kind of made me a little nervous because until we pulled him up completely, we couldn’t see just how big he actually was,” said Grochowsi. “I had no clue that he was as big as he was and it shocked me.”

Now that the rodeo is over, the shark is set to be donated to Mississippi State University for research. Grochowsi said the university will study the shark to learn more about the Tiger Shark population, feeding habits, behavior, and physiology.