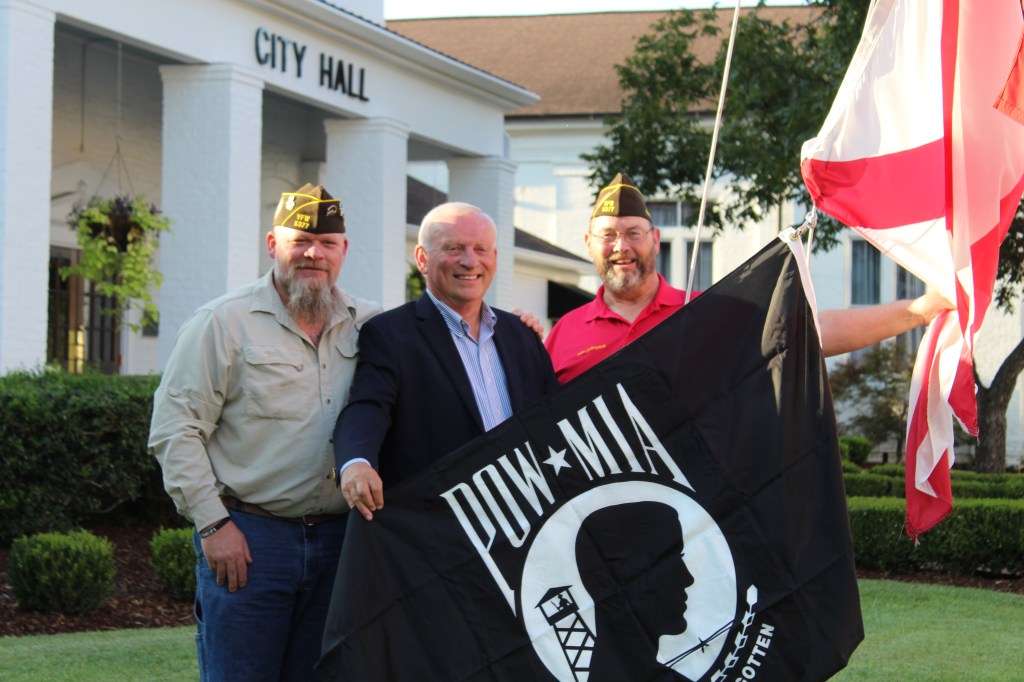 During the September 15 Demopolis City Council meeting, the council designated September 16 as POW/MIA Recognition Day, made amendments to the city’s sign ordinance, and approved a grant application for the Demopolis Municipal Airport.

The meeting began with Mayor Woody Collins reading a proclamation declaring September 16 as POW/MIA Recognition Day in Demopolis. After the meeting, Collins assisted two members of VFW Post 5377 in raising the POW/MIA flag on the flagpole outside City Hall.

The ordinance amendment was made to allow Whitfield Regional Hospital to erect 10-foot lighted signs to direct people to the emergency department from the intersection of Cedar Street and U.S. Hwy 80. Before the amendment, the ordinance only allowed signs to be six feet. The other amendment will allow the hospital to have more than one on the building.

The next item approved by the Council was a public assembly application from Main Street Demopolis director Rhae Darsey. Darsey requested to designate Public Square as an entertainment district for Bark in the Park on Thursday, September 22.

The Council approved a resolution to allow Airport Director Jason Pendergrass to apply for an $1.2 million FAA grant that would help with improvements at the airport. The grant will provide airport parking and a new taxilane for the first phase of the project. If Pendergrass is approved for the grant, it would require a 5 percent local match which would be $60,000, and the city will have to operate the airport for a minimum of 20 years.

Demopolis resident Brenda Lambert appeared before the Council to speak on problems on her street, Third Avenue. Lambert cited several issues such as trash buildup, drugs use and sales, poor street conditions, abandoned properties, and ill-maintained sidewalks. She requested that abandoned properties be removed and more police presence be added to the area. Police Chief Rex Flowers agreed to increase police patrols in the neighborhood.

Mayor Woody Collins said that the Street Department will fill potholes, but told Lambert that removing abandoned buildings is a long process and will not happen immediately.