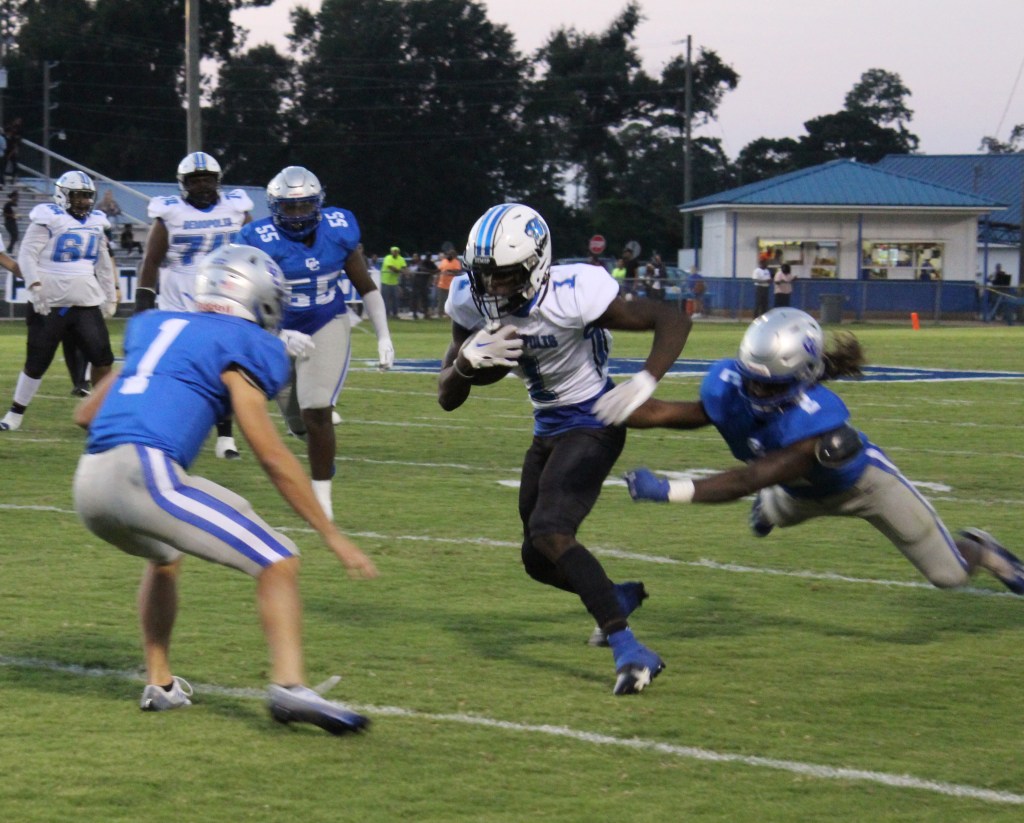 The Demopolis Tigers got off to a fast start against the Clarke County Bulldogs last Friday, September 16. The Tigers took an early lead and never looked back as they defeated the Bulldogs 49-13.

Keishawn Rowser got the ball rolling for the Tigers with 9:49 to play in the first quarter. The PAT kick by Jose Tellez was good, and the Tigers leaped out to an early 7-0 lead.

Clarke County’s first possession of the game went 4-and-out, and they were forced to turn over on downs with 8:12 left in the first quarter. Demopolis took over at Clarke County’s 45-yard line where they set up their next scoring drive.

Keishawn Rowser scored his second touchdown for the Tigers at the 6:20 mark in the first quarter. Tellez’s PAT kick was good, making the score 14-0.

Demopolis quarterback Kevin McElroy scored himself a touchdown near the end of the first quarter to put the Tigers up by 20 with 3:24 left in the quarter. The extra-point kick was good, putting the Tiger score at 21-0.

Clarke County finally got a scoring drive together on a long pass with 3:09 left to play in the first quarter. The PAT was good, and the Bulldogs cut into the Tiger score at 21-7.

The next Tiger possession saw Kentrell Adams put points on the board with just over two minutes left in the first quarter. Tellez’s extra point kick was good, increasing the score to 28-7.

The first quarter ended when Clarke County fumbled the ball, and it was recovered by the Tigers. Demopolis made quick work of the Bulldog turnover and Kelvin Rowser raced into the end zone for the touchdown with barely two minutes gone in the second quarter. Tellez remained perfect on PAT kicks, and upped the Tiger lead to 35-7 with 10:57 remaining in the first half.

After another turnover on downs by the Bulldogs, Adams found the end zone again with 7:29 to go in the second quarter. The extra point attempt was good, making the Tiger score 42-7.

Neither team would score again before going into an early halftime due to the stadium lights going out on the visitor’s side of the field.

After the teams traded several possessions, Demopolis would score its final touchdown of the night when Kelvin Rowser ran it in with 4:21 left to play in the third quarter. The extra point attempt was good, making the score 49-7.

The last score of the game belonged to the Bulldogs who scored on a short run with 3:05 left in the game. The PAT kick was missed due to a penalty backing the Bulldogs up.

Demopolis got the ball back and maintained possession until the clock expired, making the final score of the game 49-13.

This Friday, the Tigers will go on the road to take on Paul W. Bryant (Cottondale) in a non-region competition. Kickoff is set for 7:00 p.m. and all tickets are available on GoFan.com.