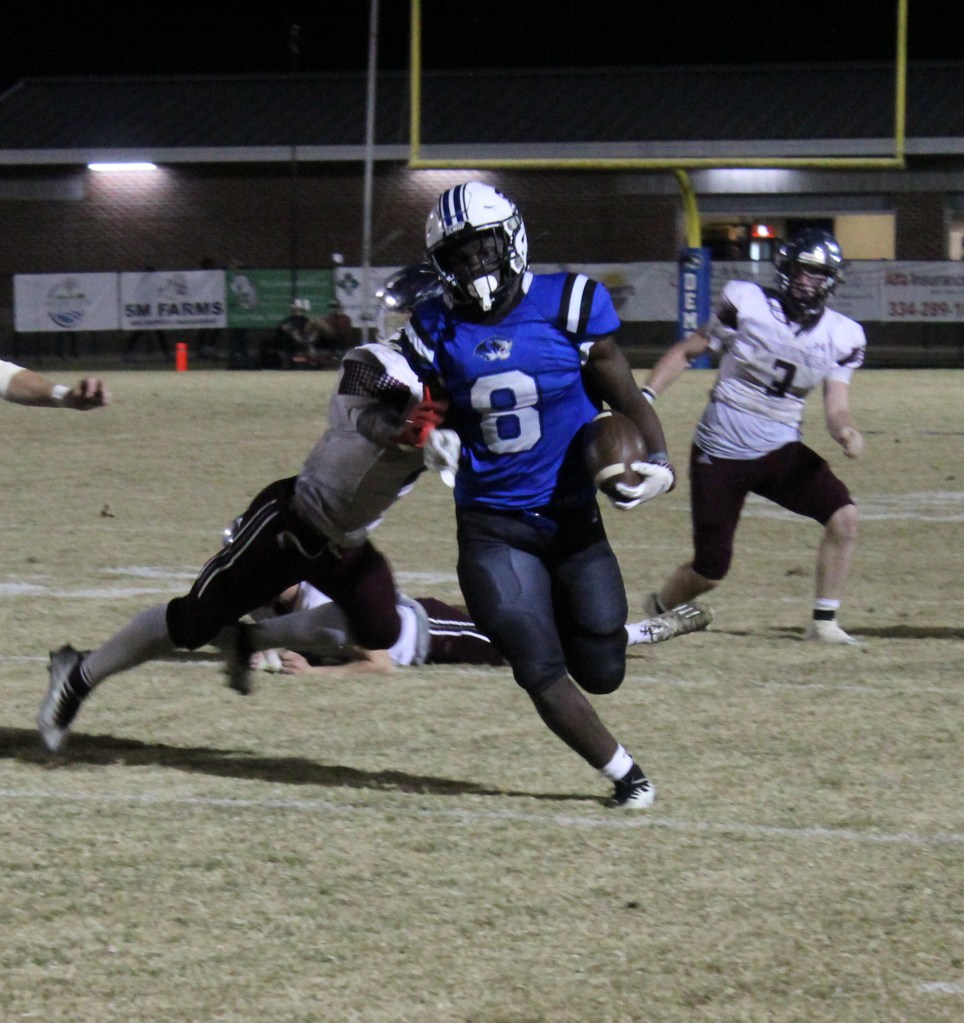 Elmore County started off on a good note when they intercepted Demopolis quarterback Kevin McElroy in the opening minutes of the game. The Panthers returned the interception to the Tigers’ 45-yard-line with 11:25 in the first quarter.

Panthers quarterback Payton Stephenson ran it in a few minutes later to put Elmore County on the board first. The PAT kick was good, and the Panthers went up 7-0 with 10:32 to go in the first quarter.

Both teams traded possessions before Demopolis found an opportunity to get on the board. Kelvin Rowser scored his first touchdown of the night and put the Tigers in a position to take the lead. However, the Panther defense prevented the two-point conversion score to keep a one-point lead of 7-6 with 5:22 remaining in the first quarter.

After another series of back-and-forth possessions, the Tigers intercepted Elmore County and returned the pick for a score with 34.5 seconds remaining in the first quarter. Again the two-point conversion failed, but the Tigers had taken their first lead of the night at 12-7.

On their next possession, the Panthers quickly moved the ball down the field to put them in another scoring position. Panthers CJ Wilkes took it into the end zone for the touchdown with 8:20 to go in the second quarter. The PAT kick was good, and the Panthers retook the lead 13-12.

Not to be outdone, Keishawn Rowser took the ball all the way from the Tigers’ 26-yard line to the end zone with 5:08 left in the second quarter. The extra point kick by Jose Tellez was good, putting the Tigers back up 19-14.

Demopolis would score one more time before the half ended when Ja’Marion Bennet intercepted a Panther pass with 1:06 remaining. The touchdown came on a pass from McElroy to Kelvin Rowser. Javian Blanks ran in the two-point conversion to up the Tiger score to 27-14 with 53.4 seconds left on the clock. 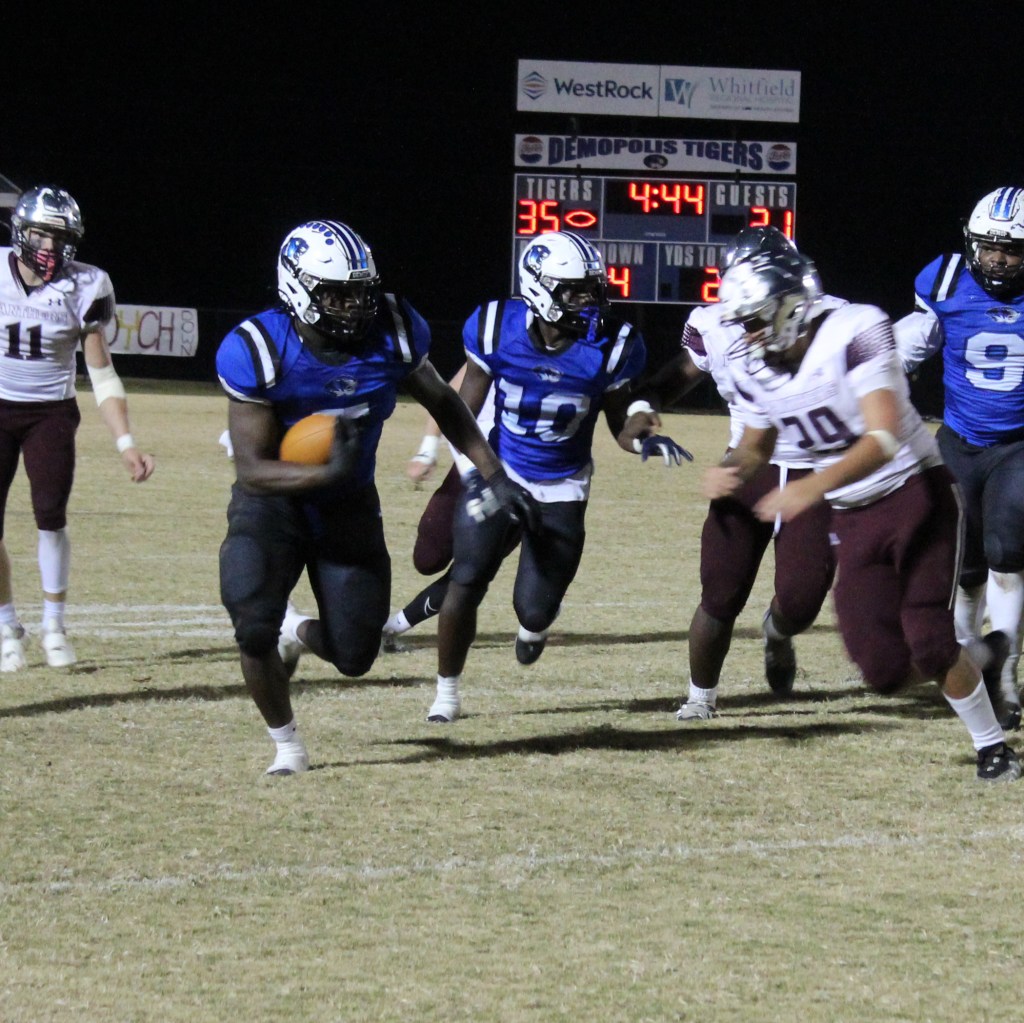 Javian Blanks runs the ball against Elmore County. Jatavion Scott (10) moves in to block for his teammate. Photo by Andrea Burroughs

Elmore County held onto the ball for the remainder of the first half but did not score.

Jabari Murphy scored the third touchdown for the Panthers when he ran it in with 9:28 to go in the third quarter. The PAT kick was good and brought Elmore County within seven at 27-21.

Kelvin Rowser scored his second touchdown of the night at the 8:03 mark. Javian Blanks ran in the two-point conversion to put Demopolis up 35-21.

On the Panther’s next possession, Ja’Marion Bennett intercepted Stephenson to get the ball back for the Tigers. Demopolis almost went four-and-out after the interception, but an offside call against the Panthers gave the Tigers the field position needed to get into the end zone. Kelvin Rowser took it in for his third touchdown of the game with 3:21 remaining in the third quarter. The PAT attempt for the Tigers failed, making the score 41-21.

After mishandling the ball from the kickoff, the Panthers found themselves pinned at their own goal line and were almost caught for a safety. However, they were able to break away and race down to the Demopolis 11-yard line with 2:50 to go in the third quarter. Unfortunately, that’s as far as the ball went, and the Panthers were forced to turn it over on downs with 1:27 left on the third quarter clock. 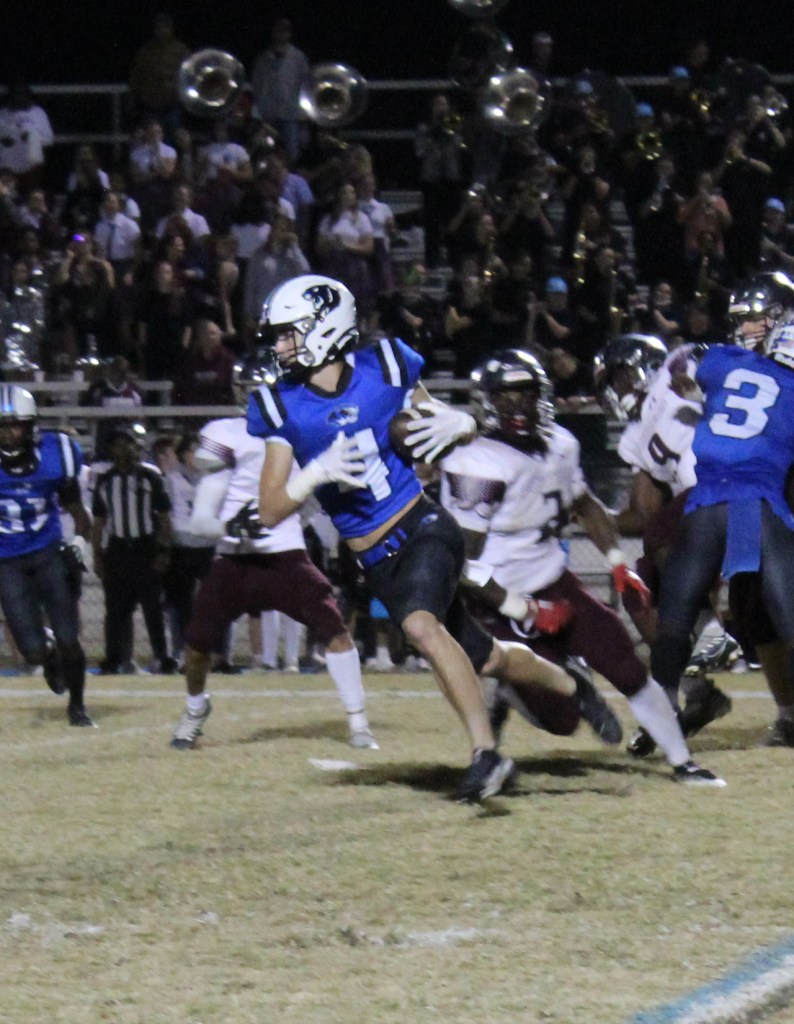 Demopolis’ next possession went four-and-out after a string of penalties with 10:05 to play in the fourth quarter. Elmore County would take advantage of those mistakes, and Stephenson ran it in for a touchdown with 7:23 to play in the game. The PAT kick was good, and the Panthers cut into the Tiger lead at 41-28.

With the win, the Demopolis Tigers (10-1) move on to the second round of the 5A playoffs. The Tigers will travel to Mobile next Friday, November 11 to take on the Faith Academy Rams (9-2). The Rams defeated Eufaula 21-15 in their first playoff game.

Kickoff is set for 7:00 p.m. and all tickets are available on Go.fan.com.