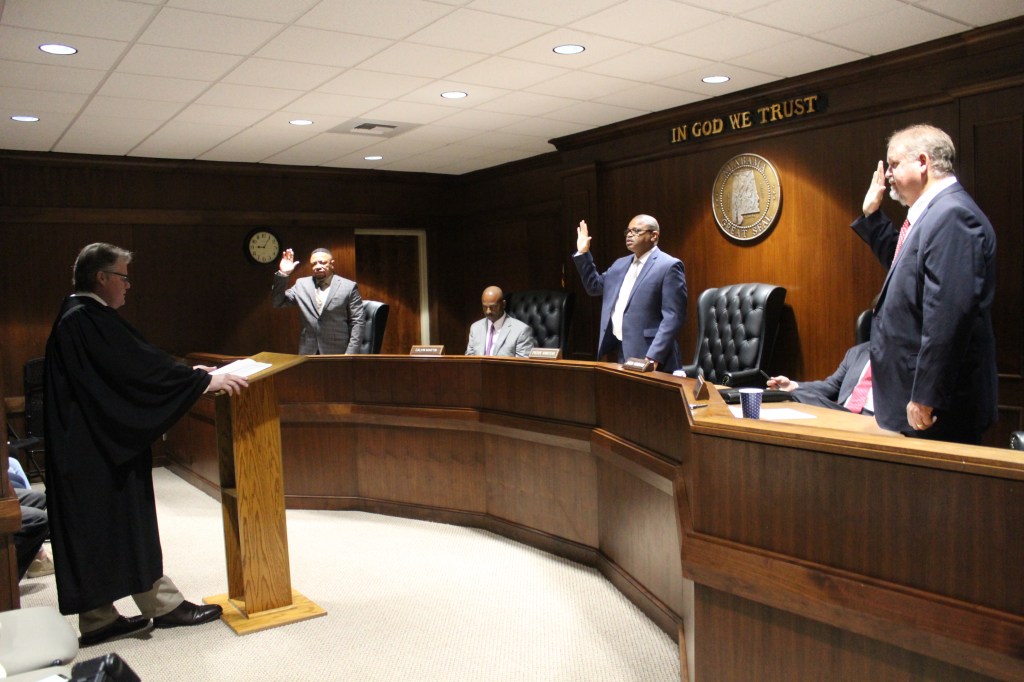 The November 16 Marengo County Commission meeting began with three new members taking their oath of office. Patrick Champion (District 5), Fred Armstead, Jr (District 1), and John Crawford, Jr (District 3) were sworn into office at the beginning of the meeting. Champion and Crawford take over from Micheal Thompson and Terry Hinton.

Next on the agenda was the recognition of James Isidore Sneed who recently turned 100 years old. Commissioner Calvin Martin. Sneed was born in Magnolia, AL on September 15, 1922. He served in the U.S. Army during World War II and is a long-time member of Shiloh Primitive. Sneed is also a cancer survivor.

The Commission discussed two new bids received from Docustore and Kofile for back scanning (digital copying) records in the Probate Office. The records need to be digitally archived as some of them are over 100 years old and are beginning to deteriorate.

The Commission voted to accept the bid from Docustore for $323,280.00. The bid includes archival indexing of documents so that people can look up information by a keyword such as a name.

Under departmental reports, Engineer Billy Joe Webb reported that surplus equipment has been listed for auction with the J.M. Wood Company. The Commission approved sending the equipment to auction.

Webb also said he would like to purchase two new dump trucks through the ACCA (Alabama Legislature of County Commissions of Alabama) joint bid. Both trucks will cost around $250,659.00 each for 2025 models.

Probate Judge Laurie Hall updated the Commission on a new bill that was introduced during the 2022 session of the Alabama Legislature that would remove the office of Marengo County Constables. Hall said time ran out to get the bill approved, but that she would send letters to Rep. AJ McCampbell, Sen. Bobby Singleton, and Rep. Thomas E. Jackson to remind them to reintroduce and support the bill in the 2023 session.

Hall also reminded the Commission about the 2022 Chilly Fest event set for December 9-10 in Linden, and that the committee has asked the Courthouse to decorate to help “make the city pretty” for Christmas. She asked the department heads and elected officials to contribute to a “donation fund” as decorations cannot be bought with county funds.

The Marengo County Commission meets on the second Tuesday of each month in the Courthouse at 9:00 a.m.