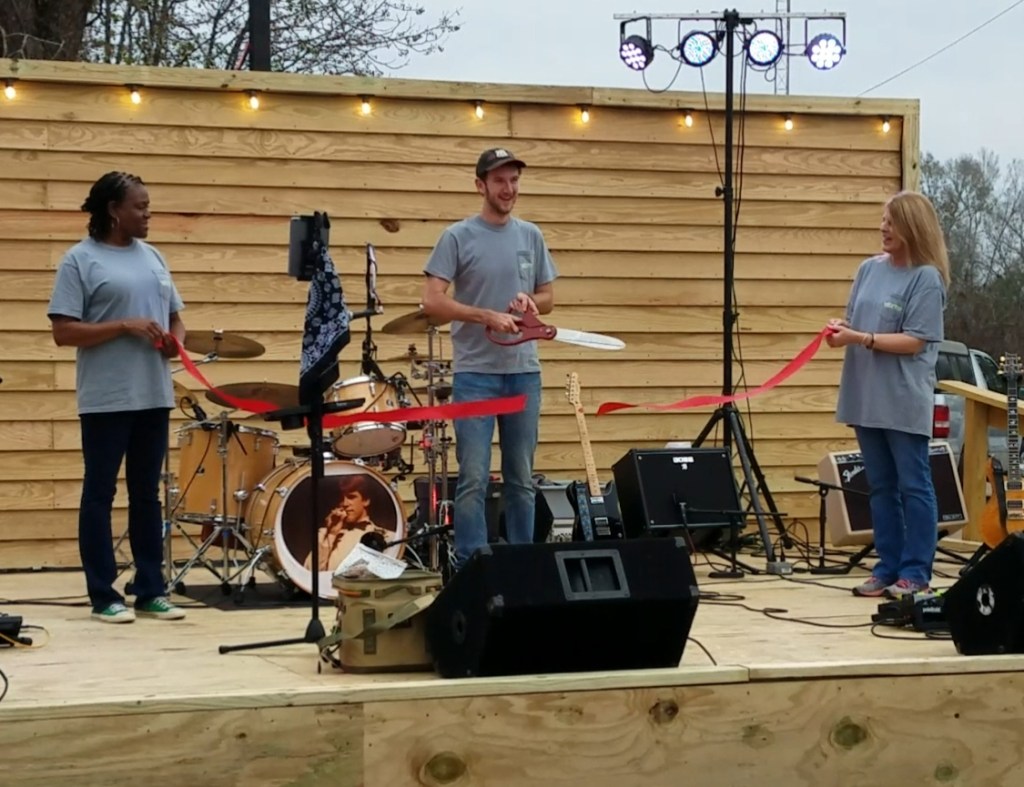 The City of Linden held a ribbon cutting ceremony for a new terrace during its Chilly Fest activities this past Saturday, December 10. Linden’s Thomas Terrace is on Main Street and will serve as a new community space for the downtown area. The city plans for the space to be used for live music, food trucks, and other events and activities.

SNAP-Ed Educator Tammy Glass, spoke during the brief event and expressed her excitement at finally opening the terrace to the public.

“I am so excited about offering Linden’s newest gathering place to our community,” said Glass.

Funding for the project was provided by HOP 1809, a community coalition, that wanted to inject life into what used to be a vibrant centerpiece of the city. The group wanted to transform the empty space into something the whole county could enjoy.

Many different people and several organizations came together to make the terrace a reality. The Sunshine Partners worked tirelessly to clean the lot, lay the floor work, built the stage, and hung string lights for the terrace opening during Chilly Fest.

Westbrook Welding volunteered some of its employees to install the poles and hang the cables for the lights, and former Linden resident Banks Compton painted two murals to add an extra touch of color to the space. One mural is a butterfly that can be used for selfies, while the other depicts a southern front porch scene “that warmly welcomes everyone who comes here.”

Linden Mayor Gwendolyn Rogers was among those recognized for helping to make the terrace project a reality. Shortly after becoming mayor, Rogers set her sights on turning the empty lot into something the city could use for different events.

She made several phone calls to the lot’s owner who was hesitant to allow anyone to make permanent changes to the space. However, after several discussions between Rogers, the owner, City Attorney Woody Dinning, Jr., and the Linden Industrial Board, a deal was met and the project was approved.

“It was thanks to Mayor Rogers’s determination and months of negotiations that purchased this property. Without her, this terrace project would not have happened at all,” said Glass.

The first performance at the newly opened terrace was the band Gun Range who were invited to provide music entertainment for Chilly Fest. A crowd joined in and around the space to enjoy the show, making the terrace’s inaugural event a success.