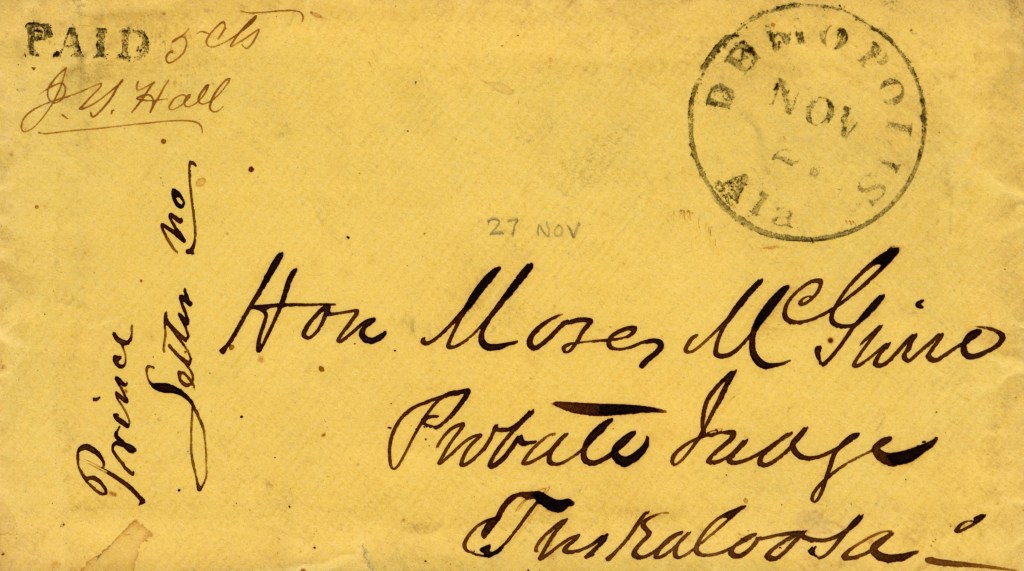 A small piece of Demopolis history has found its way to an auction in New York City. The item in question is an aged envelope dated November, 27, 1861, and was sent from Demopolis to Tuscaloosa. According to a press release from HR Harmer, the auction house that has the envelope, it was sent during the opening months of the U.S. Civil War. The envelope reads “Hon. Moses McGuire, Probate Judge, Tuscaloosa.”

HR Harmer, a New York based auction house, received the envelope as part of a larger collection that will go up for auction on January 17. HR Harmer was founded in 1940 and is one of the oldest auction houses in America specializing in rare and historic postage stamps.

The idea that an envelope from the Civil War era survived for 161 years and made its way to New York is amazing to think about. But this envelope didn’t go straight from Demopolis to New York. It had quite a journey before coming into the care of HR Harmer.

President and CEO of HR Harmer Charles Epting said the envelope spent many years in Germany as part of a collection owned by Ervian Haub (1932-2018). Haub was a German businessman and philanthropist with a love for American history. He spent decades curating a collection of United States stamps and postal history that documents the rise of America in the 19th Century and beyond.

“Ervian Haub came from a long line of German supermarket and retail magnates. When he was a teenager in the 1950s, his family knew he was going to inherit this massive retail fortune someday, and they wanted him to learn the value of $1,” said Epting. “They wanted him to not just inherit the fortune, but actually have to work for it. So they shipped him from Germany to Southern California to stock supermarket shelves. They thought if he was going to inherit the business, he needed to start at the bottom of the food chain.”

Epting said that while Haub was in California, he developed an appreciation for the U.S. and its history. He was especially interested in the history of the Civil War, the Pony Express, and other monumental moments that make up America’s history. Epting said that Haub decided from his early interaction with America that he was going to dedicate a significant portion of his life to putting together collections of U.S. postage stamps.

“For decades and decades of his life through the 1960s up until his death in 2018, he scoured the world bidding in auctions and buying from dealers, trying to acquire the best of the best,” said Epting. “So the envelope from Demopolis actually made its way from America to Germany, before coming back to New York City where we are going to be selling it.”

The collection that Haub put together has 10 installments and the envelope from Demopolis is part of the eighth installment. The collection is titled the “Erivan” Collection of United and Confederate States Postal History. The collection represents one of the most comprehensive and important holdings of American postage stamps ever assembled, and its appearance at auction marks a watershed moment for the hobby of philately, the studying and collecting of postage stamps.

Highlights from the past few years of this expansive collection include an envelope carried by the Pony Express to Abraham Lincoln, which sold for $330,000, and the famous “Blue Boy” stamp of Alexandria, Virginia, which realized an impressive  $1.18 million.

It is quite a story for one envelope that was likely never thought of again after it reached its original destination of Tuscaloosa. Epting said that when most people think about the Civil War, the story is told in terms of battles or the movement of troops and weapons, not the mail.

When the Civil War broke out, the newly-formed Confederate States of America was left trying to figure out how to set up their own postal service. The Confederate government was not initially focused on producing postage stamps, as resources were being directed towards more pressing matters. Consequently, some Southern  postmasters began creating their own stamps and stamped envelopes in lieu of federally issued stamps.

“Demopolis was one of the Southern towns that took initiative to create their own stamped envelopes,” Epting remarked. “Today these are some of the rarest Confederate States envelopes in existence, with just a handful known. This is the earliest known envelope from Demopolis, making it a very important piece of the town’s story in the Civil War. It is a really fascinating snapshot of history.”

Epting said that given the condition of the envelope and its age, it could sell anywhere from $4,000 to $6,000. Epting said there is an opportunity that it could go significantly higher depending on how much attendees are willing to bid.

The eighth installment of the “Erivan” Collection of United and Confederate States Postal History will go to public auction on January 17th.