A New Sheriff in Town: Alston takes his oath of office 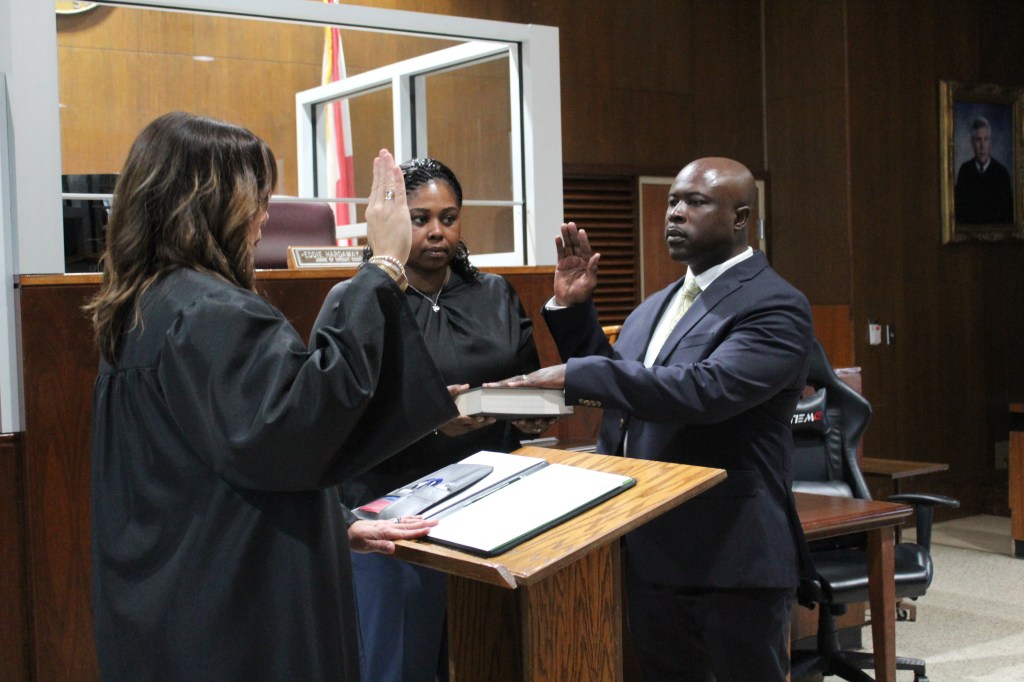 Marengo County’s newly elected Sheriff Robert Alston, Jr. took his oath of office on Tuesday, January 10. The brief ceremony was presided over by Probate Judge Laurie Hall, and family, friends and members of the press were in attendance.

When asked how it felt to be Marengo’s newest Sheriff, Alston said that “it feels great” to have finally taken his oath of office.

“It feels great taking my oath of office to become the next Sheriff for Marengo County. It’s a little apprehensive, but I’m eager to get started,” said Alston. “I know there are a lot of things that will have to be done when I get there, but I’m ready to get started.”

Alston said that what made him want to be Sheriff was the desire to see positive change within the county.

“We’ve come to an era now that I can see some changes need to be made in how we approach law enforcement. How we conduct ourselves in the field and the overall need for protection,” said Alston. “I’ve seen it and I’ve listened to some of the complaints from some of the people in county and they want to see a bit of positive change.”

From a law enforcement standpoint, Alston listed communication, protection, and accountability as things that need to be improved upon.

The biggest challenge Alston sees for himself in his new position is getting the community to trust law enforcement again.

“That is going to be the biggest challenge. There have been so many things that have happened in the county and people have been slow to respond to law enforcement,” said Alston. “Getting residents to trust and talk to us again and tell us about their concerns and issues. We want them to tell us about crimes that they are seeing but not reporting. Overall, we need to build a stronger and more trusting relationship with those we’ve sworn to protect.”

During his first 90 days, Alston said he wants to work on the infrastructure of the Sheriff’s department.

“I want to build the department back up. I want to get these guys the equipment they need to do their jobs safely and effectively. I want to make us into a proactive department,” said Alston.

The message that Alston wants to send to Marengo County residents is that he aims to be a positive figure for the county and truly wants to fix existing issues.

“I want everyone to know that I am coming to help. I am not coming to destroy; I am coming to build up our county. I want build relationships back up so that we can have a save, living county,” said Alston.

Alston still currently serves as Linden’s Chief of Police, but he will officially take over as Marengo County Sheriff on January 17.