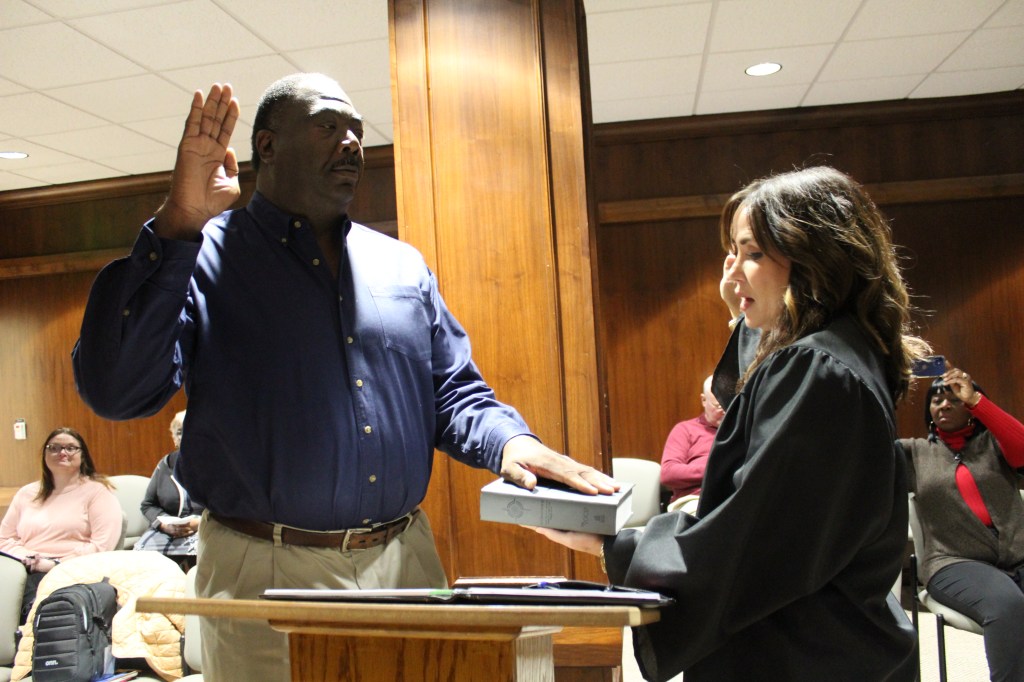 Ernest Taylor is sworn in as the new Marengo County Coroner by Probate Judge Laurie Hall.

The January 10 Marengo County meeting saw a change in Commission Chairman and the naming of a new county coroner. The meeting was relatively short, lasting just under 30 minutes.

Chairman John Crawford, Jr handed the gavel over to incoming Commission Chairman Calvin Martin. Martin thanked Crawford for his leadership of the Commission over the last few months, and looks forward to the coming year.

Marengo County’s new coroner, Ernest Taylor, was sworn in during the Commission meeting by Probate Judge Laurie Hall. Taylor was met with praise for his dedication and received congratulations on his new position.

Under new business, the topic of securing the county courthouse was the first point of discussion. The courthouse is often used as a storm shelter during severe weather, and its doors are open to anyone who needs to evacuate to a safe location. However, it was pointed out to the Commission that the building must be secured after a storm has passed.

During a recent line of severe weather, the doors of the courthouse were left unlocked and an employee who returned after the storms did not feel comfortable entering the unsecure building. Commissioner Martin said the Commission “will take care of that.”

The Commission received three bids for the resurfacing of County Road 33 from Central Alabama Asphalt and Construction for $520,442.00, Asphalt Contractors for $430,330, and S.T. Bunn for $404,579.89. The Commission accepted the low bid from S.T. Bunn. The project will be partially paid for with a $250,000 Rebuild Alabama grant.

Under old business, the re-opening of Allenville Road was discussed once more. Engineer Billy Jo Webb said he has checked on the prices of culvert pipes and that three 10-feet pipes would cost $55,000. A 12-foot wide pipe would cost $84,000. The project would also cost an additional $8,000 to $10,000 for “rip-rap rock.” The Commission decided to table making a final decision until the next meeting in February.

Under departmental reports, Webb submitted the annual report that is required by the State showing how much money the county spent the previous year as part of the Rebuild Alabama Act. Last year, the county spent $771,532.81 on a bridge replacement project on County Road 38.

Probate Judge Laurie Hall reported that she will meet with Lewis Hines, a representative of Alabama State University, and who works with the mapping of district lines. Hall said there are some locations they are going to look at where houses are creating completely separate districts for the purposes of elections. Hall said the issues could cause “confusion during elections and create unnecessary extra ballots.”

Other items discussed/approved by the Commission:

The Commission meets on the second Tuesday of each month at the Marengo County Courthouse at 9:00 a.m.