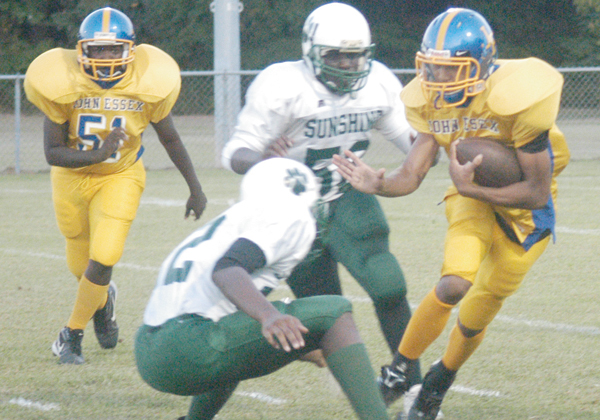 A.J. Bennett could do no wrong Friday night.

The senior multi-purpose man scored three times Friday night in John Essex (2-1) 24-8 win over Sunshine; once on offense, once on defense and once on special teams.

“He’s having fun out there. Good for him. He deserves it.”

Bennett took center stage shortly after opening kickoff, stretching a short pass from Terry Fountain 70 yards for a score on the first play of the game.

The first play of the second quarter looked eerily similar as Bennett thundered 90 yards from scrimmage for what appeared to be his second score in 12 minutes. However, a clipping penalty negated the long run.

With time winding down in the half, Bennett flipped a short 10 yard completion to Denzell Charleston who scampered another 20 yards into Sunshine territory. However, an interception on the next play killed the Hornet’s momentum with only seconds left in the half.

With no time left on the clock, Bennett stepped in front of a Sunshine pass and took it 70 yards for his second score of the night, giving John Essex a 12-8 lead at the half.

The third quarter opened with a defensive struggle. With 3 minutes left in the third, and facing fourth and long, Sunshine launched a punt to an awaiting Bennett who promptly returned the ball 50 yards for his third score of the night and gave the Hornets an 18-8 edge.

As the fourth quarter ticked on, Sunshine mounted its best drive of the night but Charleston pounced on a Tiger fumble on the Hornets’ three yard line, killing the drive and giving the Hornets a long field to travel.

John Essex mounted a drive that ate six minutes off the clock and culminated with a 6 yard TD run from Charleston, giving the Hornets the 24-8 win.

Fountain, who played quarterback for all of one play, lead the Hornets in passing yardage going 1-for-1 with 70 yards and a score. Charleston led the rushing attack with 74 yards on 15 carries. Bennett, who had 80 yards receiving on the night, also had 35 yards rushing.

The Hornet defense gave up only 2 yards passing and a combination of seven Sunshine runners rushed for 137 yards.