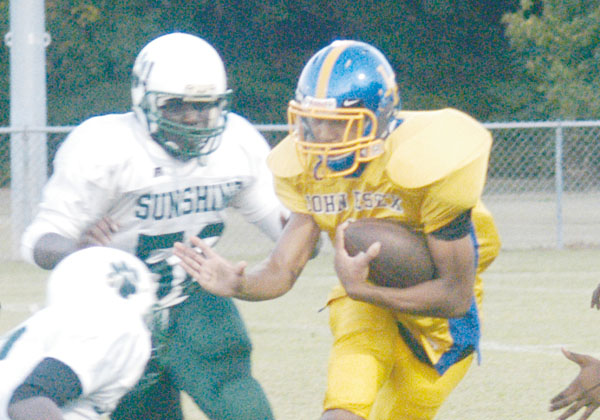 A.J. Bennett of John Essex was this week's ASWA Defensive Player of the Week. -- Jason Cannon | The Demopolis Times

John Essex senior A.J. Bennett earned Defensive Player of the Week honors from the Alabama Sports Writers Association for his play in last Friday night’s 24-8 win over Sunshine.
Bennett, an all-state wide receiver for the Hornets in 2009, has become a jack of all trades this season after graduation ravaged an already thin John Essex roster. Bennett had a 70-yard interception return for a touchdown and a 50-yard punt return for a score against the Tigers. He also contributed offensively, hauling in a 70-yard touchdown pass. His 90-yard rushing touchdown was erased by a penalty.
“I proved I can do more than just play offense,” Bennett said of his Friday night game, which saw him amass 225 all-purpose yards.
But head coach Jerome Antone knew well before Friday night that Bennett could do more than contribute on offense.
“At this point, he has right at 500 all-purpose yards and five touchdowns so far,” Antone said of Bennett, who also has three interceptions on the season. “He’s very important because he is an athlete. He means a whole lot with his leadership and his ability.”
Antone said he learned of Bennett’s athletic abilities early but remained in doubt about the senior’s leadership prowess. His mind has changed since that time.
“As time progressed, he started showing his leadership,” Antone said. “He is one of the most athletic players I’ve ever coached in my career. And he’s got a lot of class. I really like that.”
For Bennett, whose team is 2-1, the task is now to build on that performance as he tries to guide the Hornets to more wins.
“It’s the best game I’ve ever played,” Bennett said. “I feel like I can do it every Friday.”