Essex hampered by penalties in loss 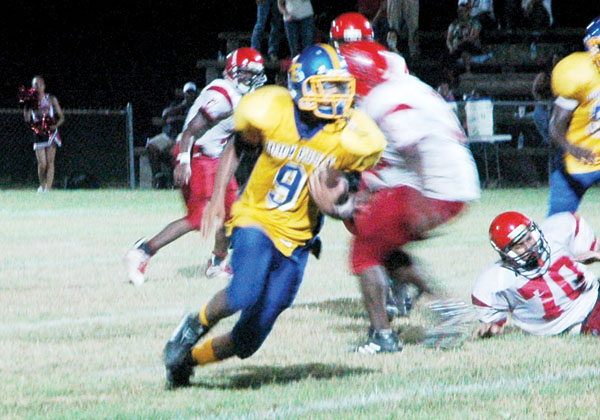 JEHS senior A.J. Bennett had two touchdowns and had two called back by penalties in the Hornets' 24-14 loss to Coffeeville.

John Essex running back A.J. Bennett returned a punt 57 yards for an apparent touchdown that would have given the Hornets the lead in their game against Coffeeville, but the run was called back on a roughing the kicker penalty, and the Panthers were able to score and hold off the homestanding Hornets 24-14.
John Essex (2-3) got on the scoreboard first when Bennett took a one-yard run into the endzone in the first quarter, giving the Hornets an early 6-0 lead.
Coffeeville (1-4) returned the ensuing kickoff deep into Hornet territory, setting up on the JEHS 29-yard line. The Panthers were able to push little by little until Dexter Williams punched it in from the 2 near the end of the first quarter, tying the game at 6-6.
John Essex threw an interception near midfield, and Coffeeville marched down the field, getting to the JEHS 11-yard line. The Panthers took advantage of three offside’s calls against the Hornets, bringing the ball to the 1-yard line, where quarterback Andreas Lewis drove it in, giving CHS a 12-6 lead.
The Panthers again pulled down an interception at midfield. Lewis again scored, turning a broken play into a one-yard scoring run, giving Coffeeville an 18-6 lead late in the first half.
On the ensuing kickoff, Denzell Charleston took the kick and ran 10 yards before handing it off to Bennett, who took it 77 yards for a touchdown as time ran out in the first half. Charleston ran the two-point conversion, and the Hornets pulled to within 18-14 at the half.
On the first drive of the second half, JEHS freshman Demarcus Bennett went up and pulled in a Panther pass in the endzone, halting a Coffeeville drive and setting the Hornets up on their own 20.
Essex marched down the field, getting to the CHS 12-yard line. Bennett ran for an apparent touchdown that was called back by a Hornet holding penalty. Coffeeville pulled down another interception, this one at their own 3-yard line, halting the Hornet drive.
John Essex halted the Panthers on their ensuing drive, and forced Coffeeville to punt. Bennett took the kick and returned it 57 yards for an apparent go-ahead touchdown, but the Hornets were flagged for roughing the kicker. The Panthers took possession and went downfield, scoring on a 10-yard run by Lewis, giving CHS the 24-14 win.
“That was a very tough game to lose,” said JEHS head coach Jerome Antone. “We thought we had it on that punt, and they called roughing the kicker. I didn’t see it, but that’s just the way the ball bounces.
“I hope this brings us closer together as a team and lets us know that no one’s going to give us anything. We’ve got to fight our way through adversity. I feel deep in my heart that this was a game we should have win; you’ve got to win the games you’re supposed to win, and that’s the way it goes in any sport.
”We’ve got to stop making excuses,” he said. “I still believe in my team; I really and truly still believe in these young men, but they’ve got to continue to believe in themselves and work harder.”
John Essex (1-2 1A Region 4) visits regional rival Maplesville (5-0 overall, 3-0 1A Region 4) on Friday, while Coffeeville (0-3 1A Region 1) visits regional rival Saint Luke’s (0-4 overall, 0-3 1A Region 1).