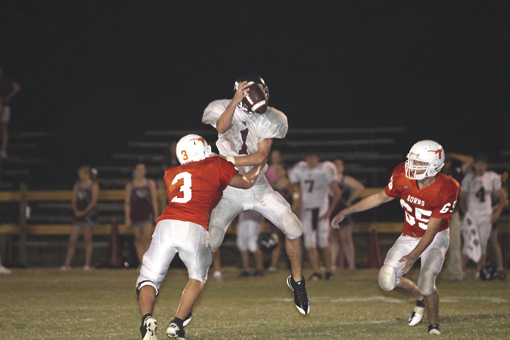 LINDEN — Marengo Academy got a much-needed win last week against South Montgomery County, but suffered a few more nicks and bruises in the process. Injuries to tailback Rabe Hale and valuable contributor Brant Lewis will leave the 2-3 Longhorns even more shorthanded this week as they try to find a way to topple accomplished rival Patrician.

“We struggled around the other night and still pulled it out,” Marengo Academy head coach Robby James said. “They really played hard I thought. They really wanted to win Homecoming and they played hard enough to do it.”

In that effort, Marengo Academy got a pair of touchdowns from Matt Etheridge and another from Rabe Hale, who rushed for 93 yards on 11 carries before sitting out the second half with a concussion. Chris Sammons added a 76-yard touchdown catch for MA.

If history is any indication, James’ group figures to play hard this week too. The Longhorns are 20-19 all-time against Patrician, but will have to overcome a growing mountain of injuries in order to stay above .500 in this rivalry.

“I’ve got four starters out for this game,” James said. “We’re going to have to play well. Patrician has got a really good team. They run the same offense we run, the Wing-T. They do a good job of it. They run the ball well. I don’t know of anybody that has really stopped them. That’s always been a hard-fought game.”

James remembers well the first time he led the Longhorns into battle with Patrician. In that 2009 contest, the Longhorns pushed Patrician to the closing minutes of the fourth quarter before losing 30-21.

“Our guys got after it and played them hard and did not back down,” James said. “I think we’ll do the same thing this week. We’re not making excuses about having guys out. That’s what team means. It means somebody has got to step up.”