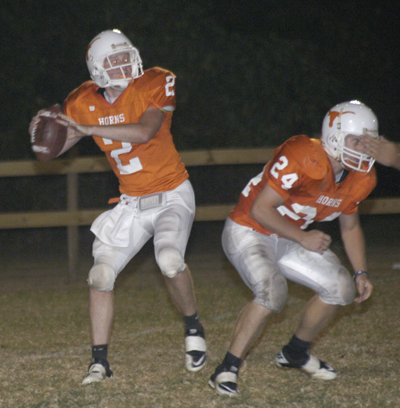 LINDEN — The Longhorns (2-6, 0-5) appeared poised for a tight game after a contentious first half but failed to score in the final two quarters en route to a 49-21 loss to Southern Academy Thursday.

“They played hard. They give out a little bit toward the end,” Marengo Academy head coach Robby James said of his players. “They came out and showed a lot of pride I thought. I am very proud of the boys.”

The Longhorns trailed 28-14 with 2:37 to go in the second quarter before they mounted a 50-yard drive on four plays to cut the deficit to seven when quarterback Matt Wallace hit Trevor Johnson for an 11-yard touchdown pass.

“I really played him more than I thought I was going to,” James said of Wallace, who was discharged from the hospital earlier in the day after having had pneumonia. “But the game stayed close for a while and he said he felt great.”

Following the touchdown pass, the Longhorns bent but did not break when Southern tried to answer. Chris Sammons and Eric Pearson teamed to stop the final play of the half just inside their own 1 to preserve the deficit.

On the first drive of the second half, Marengo took over at its own 6 and drove as far as the Southern 39 before the drive stalled and forced a punt. The Cougars proceeded to march the ball 81 yards in 11 plays to up the advantage to 35-21. The Longhorns never got back in the game.

Marengo got its first touchdown of the night when Sammons answered a Ryan Averette touchdown plunge with a 95-yard kickoff return before adding the extra point himself to tie the game at 7.

“Chris really showed a little bit of speed right there,” James said of Sammons, who moved from tight end to fullback last week and also served as cornerback, kickoff specialist, kick returner and punter for the Longhorns Thursday. “He’s a winner. He plays hard. He never comes off the field.”

The early back-and-forth sequence came just minutes after Matt Etheridge had seemingly put the Longhorns on top with a 70-yard punt return score that was negated on a block in the back call.

The Longhorns second touchdown came when Wallace hit Johnson for a 61-yard score, allowing Sammons to knot the game at 21 with a point-after kick.

Sammons also intercepted a pass from his cornerback spot while David Creel recovered a fumble forced by Mason Stokes.

The loss came in the next to last home game of the year for the Longhorns, who travel to Wilcox next Friday before wrapping their season up at home against Pickens Oct. 29.

“You want to finish strong,” James said of his team’s goal for the remainder of its injury-riddled 2010 campaign. “That helps your program for the next year.”