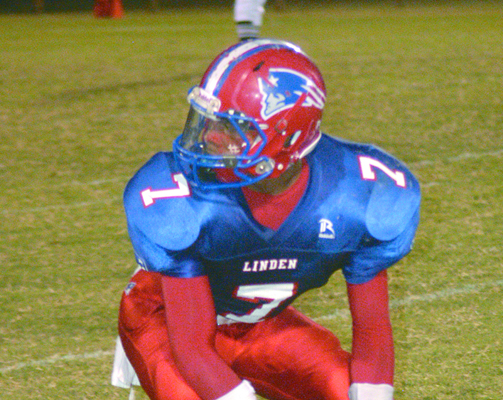 LINDEN — The last time the Patriots and Sweet Water lost on the same night was the third round of the state playoffs in 2009. Linden fell to eventual state champion Brantley while Sweet Water lost to Loachapoka. However unlikely the scenario may be, if both teams were to lose Friday night, Class 1A, Region 1 would go into upheaval.

The Bulldogs, would drop to the No. 2 seed, Marengo would jump to the No. 3 seed and Linden would topple all the way to No. 4 while McIntosh would claim the region title.

Linden head coach Andro Williams has informed his players of this scenario and is hopeful his Patriots will do their part to prevent the doomsday turn of events.

“We’re playing one at a time from here on out,” Williams said, dispelling the notion that his team could get caught looking beyond Marengo to its impending rematch with Brantley next week. “We know this region is not sewed up all the way yet.”

Williams also knows a Patriot victory should not come easily against an opponent as formidable and athletic as Marengo.

“They are a dang scary looking football team,” Williams said. “They are sitting here in a situation where they just got revived. They are in the playoffs. And now they have a chance to move up to the third seed. They are definitely a talented bunch. They play hard. They are physical. They are one of the most physical teams we’ll see. They get after you on defense.”

Linden will have to deal with the Panthers fresh off a 64-0 blowout win over St. Luke’s a game in which the starters played very little time.

However, Williams feels his team has already made up for the experience its starters lost during that contest.

“I thought we made up for it last week in practice,” Williams, whose starters played sparingly the week before against Coffeeville, said. “We aren’t getting a whole lot of reps on Friday night. We just have to make up for it in practice.”

The Patriots also have the added distraction of Homecoming week with which to deal as they prepare for the Panthers.

“It’s special because you’ve got a lot of alumni and special people coming back to see what our team looks like,” Williams said before turning his attention to the fact that many of his players have close relationships with a number of the Marengo players. “We’ve got a lot of kids on our team that have a lot of ties with the families from Marengo.”

The Pats host the Panthers Friday night at Linden Athletic Field with kickoff scheduled for 7 p.m.