Player of the Week: Chris Sammons 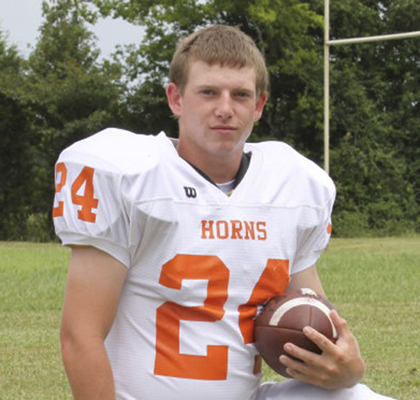 Raycelia McIntyre/Special to the Times -- Chris Sammons returned a kickoff 95 yards for a touchdown, hit all three of his extra-point attempts and intercepted a pass last week against Southern Academy.

But he does enjoy the game. And he certainly plays it like he enjoys it.

He plays for his friends, his school and his pride. And in a week chocked full of standout individual performances, Chris Sammons of Marengo Academy topped the list.

Aside from the three touchdown saving tackles he made, Sammons intercepted a pass. He hit all three of his extra point attempts. And he returned a kickoff 95 yards for a touchdown.

That stat line helped keep Marengo Academy competitive for most of their Thursday night matchup with Southern. But it also garnered him attention from the Alabama Sports Writers Association, who deemed him one of three finalists for the Defense/Special Teams Player of the Week award.

But it was not just the stat line that earned Sammons the Player of the Week nod from The Times, it was the way he played the game.

Sammons went hard every play. He did not play a perfect game. He had his share of mistakes, but they were all effort mistakes.

And effort is key when assessing Chris Sammons’ contributions. He started the year as a tight end on offense and shifted to fullback when a bevy of injuries rocked the Longhorn roster. He is a starting cornerback. And Thursday night he also served as the kicker, punter and kickoff specialist.

His contributions have been immeasurable. During a season where his team has suffered more injuries than it can count, Sammons has been a constant. And in a game where Southern took control early in the second half and never looked back, Sammons played like it counted. He never left the lineup until the starters were pulled in the fourth quarter.

He’s not the biggest, strongest or fastest Longhorn. Not even close. But Chris Sammons doesn’t care. He plays every minute like it counts.