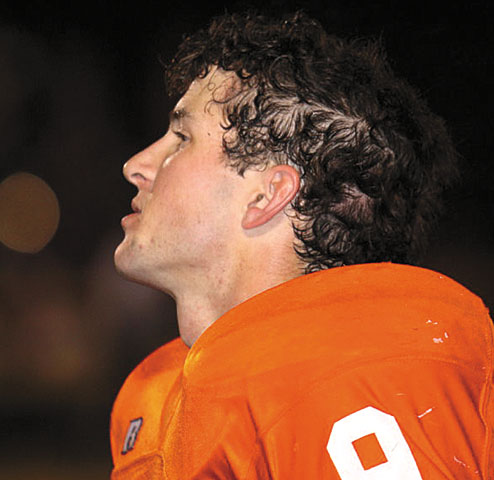 LINDEN — Marengo Academy’s (2-8) nightmarish season ended Friday night with four turnovers in the first half during a 41-17 loss to Pickens Academy.

The Pirates struck first when quarterback Jacob Acker bolted 61 yards for a touchdown less than two minutes into the game. The extra point put Pickens up 7-0.

Two plays later the Pirates stripped the ball from the Longhorns. John Morgan Owens took the ball 36 yards on two carries to stretch the advantage to 13-0.

After a Pickens interception, the Longhorns managed to force a turnover on downs to give themselves a chance to stay in the game.

That feat seemed accomplished when Matt Wallace hit Trevor Johnson for a pass that appeared destined for six before the Pirates drug the tight end down 75 yards away from the line of scrimmage and four shy of the end zone. MA settled for a 26-yard field goal off the foot of Chris Sammons to cut the score to 13-3.

Pickens countered with a steady diet of Owens, who accounted for 45 yards on four carries to help set up a 15-yard touchdown pass from Acker to up the lead to 20-3.

Things went from bad to worse for the Longhorns when Owens scored again on a 20-yard run with 10:34 to go in the second quarter to inflate the advantage to 27-3.

Two plays later Pickens picked off another pass to set up a drive that Acker punctuated with a 16-yard touchdown pass to push the lead to 34-3.

A third Pickens interception in the first half set up a 38-yard Acker pass to put the Pirates at the MA 1 before a fullback dive stretched the lead to 41-3 before the intermission.

The Longhorns mustered some momentum in the second half as the game clock continuously ran. Marengo scored on its only two possessions of the second half, riding a steady balance of Matt Etheridge and Josh Holifield carries down the field. Etheridge, a senior, scored both Longhorn touchdowns on the night, accounting for 137 yards on nine carries in his final game in Marengo orange.

“I’ve coached a lot of kids. He has been one of the hardest workers and most fun kids I’ve coached,” James said of Etheridge. “He is a winner.”

The loss caps a difficult season for the Longhorns, who began the campaign with only 17 varsity players and lost nearly half of them to injury over the course of the fall.

“I just hate if for the kids. We’ve had all kind of things happen to us. It’s been the most unusual season I’ve been a part of,” James said before turning his attention to his departing seniors. “These kids have been together a long time. This group means a lot to me and I’ve told them that.”