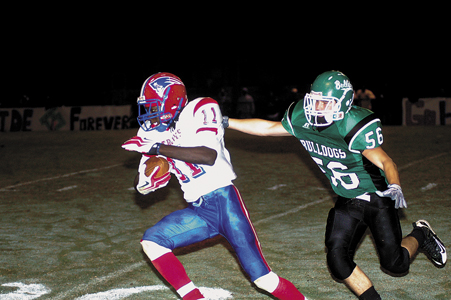 LINDEN — The Patriots will take on Kinston for the first time Friday night when they host Region 2 No. 3 seed in the first round of the state playoffs.

Kinston enters at 6-4 and presents a unique challenge to the Linden defense. According to Linden head coach Andro Williams, Kinston has no key offensive player on which to focus.

“That’s what’s scary about this team,” Williams said of the Kinston offensive attack, which utilizes a double wing scheme. “They are a double wing team. They want to run the football. We just want to make sure we line up right to all their stuff.”

The Patriots will utilize a lot of looks defensively that feature two inside linebackers in order to counter the double wing attack. The Pats defensive approach also figures to be helped by the Linden debut of Ryan Preston, a junior nose guard transfer from Sweet Water that has not played in more than a year.

“We’re getting Ryan Preston up there this week,” Williams said. “He’s real good in practice. He disrupts stuff offensively in practice a lot. He makes what we do better. We won’t change anything, but we’ve got some things we can throw at some people with him.”

Linden will also be countering a rarely-used defensive scheme when it attempts to move the ball against Kinston.

“Defensively they line up in a 33 stack,” Williams said. “It sort of looks like what Brantley does except they do a little more out of it. Their coach does a good job of utilizing what they’ve got.”

The Patriots will also have at their disposal that talents of Sweet Water transfer Randy Jackson, who made his Linden debut two weeks ago.

“Randy Jackson has play the last two weeks and has been real valuable for us,” Williams said.

“He has been kicking off and punting for us. He’s just a smart football player.”

Jackson also adds to the depth the Patriots have at their skill positions, helping Williams’ confidence in what his team may be able to do this postseason.

“I’ve got that feeling that this is one of those teams that can get us over the hump,” Williams said.